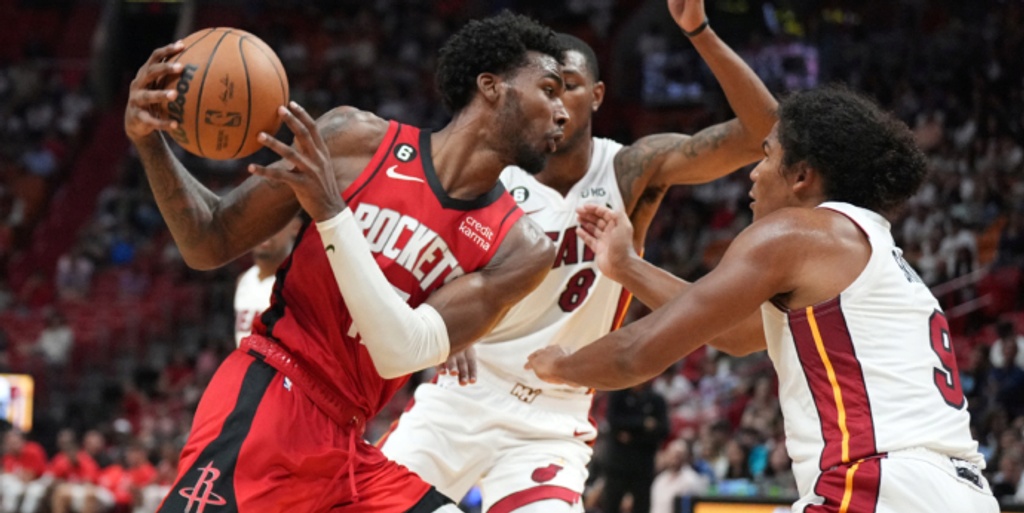 If you flicked on a random Tari Eason highlight in the past two weeks, you probably wouldn't realize we're still in the thick of the NBA preseason.

Eason has been the sultan of second efforts through three exhibition contests, swooping in for offensive rebounds and shrugging off contact to get putback points. He's averaging a league-high 5.3 offensive boards per game by snaking around boxouts, like in the below clip.

These types of hustle plays have garnered early respect from fans and teammates, but they're just one facet of Eason's preseason showcase. The No. 17 overall pick has put up 20.7 points and 10.0 rebounds per game with a scorching 64.1% shooting clip from the floor. Eason is the early "steal-of-the-draft" badge-wearer, and he has Rockets fans daydreaming about how he could fill some of the critical holes in Houston's young core.

Eason is an eye-popping vertical athlete for a player his size (6-foot-8) and that has shown up on some of the transition hammer dunks he's dropped so far. But that bounce, coupled with a 7-foot-2-inch wingspan, also allows him to swallow up rebounds like this.

Tari Eason suction cups for hands. Also, this is good awareness by Mathews to balance the floor once he sees Eason go to the rim. pic.twitter.com/jVwoqTvyTc

Despite a somewhat bizarre bounce, Eason overcomes his late dash to the interior and skies over Jamal Cain for the board. Cain's no slouch; he's 6-foot-7 and has played hard for the Miami Heat this month en route to a two-way contract. But Eason timed his late jump well, and followed it with a quick second leap for the bucket.

This level of intensity is obviously a way for Eason to earn the respect of his coaches, and in turn, get some playing time. Houston ranked 20th in offensive-rebound rate last season.

He has not been a super efficient driving finisher, but Eason covers some remarkable ground with his handle and stride size. He loves this power step-through and displays some surprising body contortion for his size. Eason has natural touch around the basket, and I wouldn't be too concerned about a touch miss in this small sample.

However, the downside to these power drives is that they often leave Eason out of juice when he goes up for a shot. Those long strides sap him of vertical pop and lead to some tough blocked shots:

Though he has just three assists in three preseason games, Eason has thrown some eyebrow-raising passes, including this one:

You won't see it in many highlight reels because of the blown finish, but this full court bounce pass by Tari Eason after securing the steal was absolutely sensational.

He's also made some impressive reads in the half-court, though they haven't equated to scores. At the same time, Eason sometimes telegraphs his plan a bit too plainly, and it leads to turnovers like these:

I'm optimistic about Eason becoming a better decision-maker. The fact that he's seeing these passing options is a positive, and as he acclimates to NBA pacing and spacing, his experience will naturally help his intuition.

The Rockets have to put Eason in positions where he can gamble with his physical tools and developing vision. His length and strength are already coming in handy on defense, where Eason can will himself out of bad spots and create opportunities out of thin air.

Against the Heat on Tuesday, Eason altered shots like he was shot out of a cannon. That third clip, where he glides in to effortlessly reject a Duncan Robinson three-point attempt, still amazes me given where he was mere split-seconds before. Eason also can afford to dig at driving players, like he does against Max Strus, because he's long and agile enough to recover back and provide a quality contest.

The 21-year-old should get on the floor because he can grab rebounds and create havoc on defense. He can exceed expectations, perhaps to All-Rookie-type levels, by developing his jumper and syncing with the fluid lanes and pockets that come together on an NBA court. Will he have stretches of poor shooting and unwise gambling on both ends? Probably — most young players do.

But Tari Eason is a rookie who already has strengths in a defined role and flashes of upside in versatility. That's already pretty special, and it makes him a must-track member of this 2022 class.