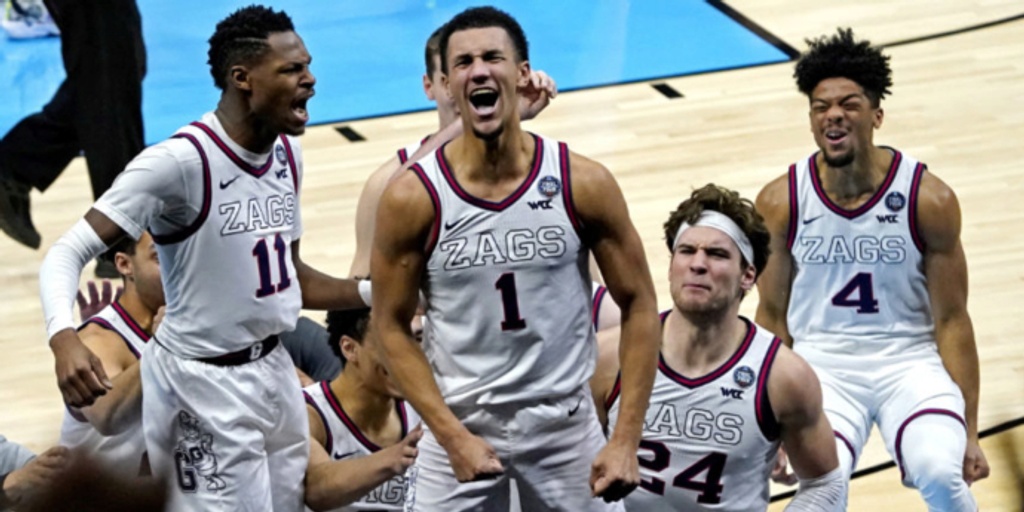 Hey yo. You know exactly what time of year this is. Now, for the purposes of this adventure, let’s clarify a few things.

“You can’t be serious with that shot!”pic.twitter.com/Qf3MWNY4xH

“You can’t be serious with that shot!”

Kansas has made literally every NCAA Tournament since 1990, and every single time, they’ve been the higher seed in round one. As a result, they’ve had some embarrassing losses, and because they’re a blue blood, some of us laugh at them every time. Arguably the best and ballsiest example of this came in 2010.

Kansas was a No. 1 seed in their region – as they normally are – facing ninth-seeded Northern Iowa in round two. Northern Iowa led 63-62 while breaking Kansas’ press with 42 seconds to go. Northern Iowa quickly broke said press, landing the ball in the hands of a senior guard named Ali Farokhmanesh.

As 37 seconds remained – with 30 on the shot clock – you’d figure he’d hold and either get fouled or just milk the clock. But his eyes made love to the net about 24-feet-away, and once Kansas realized he was actually going to take the shot, it was too late. Northern Iowa won 69-67, reaching the Sweet Sixteen for the only time in program history.

Five years ago today, RJ Hunter knocked his dad (and coach) off his stool with a game-winning three 🔥

“What are they doing?”

Baylor led Georgia State 56-54 with 14.1 seconds to go in 2015. Ron Hunter, Georgia State’s head coach, tore his Achilles while celebrating the team's Sun Belt Conference Tournament Championship days before the NCAA Tournament, so he had been coaching from a stool. His son, RJ Hunter, was the best player on the team and, naturally, had the ball in his hands for the team’s last possession. It was an objectively terrible possession, which caused the commentator to ask aloud, “What are they doing?”

Hunter basically pulled a near 30-foot three-point-attempt with around four seconds left, and made it, giving the 14th-seeded Panthers an upset win over the third-seeded Baylor Bears in round one. More importantly, the stool-sitting Ron Hunter fell on his face in celebration on the sideline.

On this day 24 years ago, No. 16 Harvard upset No. 1 Stanford. This was the first major upset in tournament history!#MarchMadness pic.twitter.com/ij0qnl4oiz

Before UMBC stunned Virginia in 2018, becoming the first No. 16 to defeat a No. 1 in the men’s tournament, the Harvard women’s squad made history 20 years earlier. The Crimson went 22-4 during the regular season, and ran into a Pac-10 heavyweight in Stanford, who had been in the previous three Final Fours and won two national championships earlier in the decade.

The win was not only impressive because Harvard matched Stanford blow for blow all night long, but they won in Stanford.

In 2016, Texas A&M rallied back from down 12 with 36 seconds left to force OT vs Northern Iowa

As great as Northern Iowa’s win over Kansas was in 2010, their 2016 loss against Texas A&M was equally as impressive. Northern Iowa, as the No. 11 seed, led third-seeded A&M 69-57 with 44 seconds to go en route to another Sweet Sixteen. And then, an A&M squad, led by a couple seniors you may recognize named Alex Caruso and Danuel House, made the most ridiculous comeback you may have ever seen in such a short span, forcing overtime, and eventually winning 92-88 after multiple OTs.

The first time some of us heard of Florida Gulf Coast was during their 2013 NCAA Tournament run, which earned them the nickname Dunk City. Why? Because these dudes were catching bodies on a seemingly improbable run to the Sweet Sixteen. FGC wasn’t even a Division I school until 2007, but as a 15-seed in 2013, they tomahawked their way to a 78-68 victory over No. 2 Georgetown – Otto Porter’s last college game – and continued raising hell against No. 7 San Diego State, alley-ooping their way to an 81-71 win.

They lost to No. 3 and inner-state foe Florida 62-50, but made a memorable enough run that people still call them Dunk City to this day. They even pissed off Joakim Noah, who was in attendance, before bowing out gracefully. Thankfully, Kevin Harlan was the perfect broadcaster to take us on this experience. If there’s anything to bring in the casual observer, it’s a bunch of dudes you’ve never heard of just unexpectedly yamming on people.

UConn had 111 straight wins heading into the 2017 Final Four, including the previous four-straight NCAA titles. A team including future WNBA’ers Kia Nurse, Gabby Williams, Katie Lou Samuelson, Napheesa Collier, Crystal Dangerfield and Saniya Chong led UConn to wins of 116-55, 94-64, 86-71 and 90-52 heading into their match-up with Mississippi State. The Bulldogs had just gotten by Baylor in overtime in their Elite Eight game.

Mississippi State – highlighted by future WNBA first rounders Teaira McCowan and Victoria Vivans – not only kept it close, but dragged UConn into overtime for the first time all season. Tied at 64 with 12 seconds left, Dominique Dillingham brought the ball up the floor, and when met with a double team, found guard Moran William around 30-feet from the basket at the top of the key with less than five seconds left. William faked a pass left, quickly knifed toward the right elbow, pulled up from outside the paint and splashed the game-winner, ending UConn’s streak and sending Miss. St. to the national championship, where they lost to South Carolina.

A GAME FOR THE AGES!

Jalen Suggs drains a heave for No. 1 Gonzaga to take down No. 11 UCLA and advance to the #NationalChampionship!

Last year’s tournament had a different vibe due to the lack of crowds, but one of the most memorable moments came in the Final Four. No. 1 seed Gonzaga and No. 11 seed UCLA were in overtime during their national semifinal matchup. Johnny Juzang, who is back with UCLA this season, made a game-tying layup with 3.3 seconds left, putting this at 90 each.

Current Orlando Magic guard Jalen Suggs quickly got the inbound, sprinted the ball up the floor, pulled from a couple steps beyond half-court and banked in the game-winner to send them to the National Championship game with a 31-0 record. Like Mississippi State, they lost in the title game, but hell, at least they got there.

Okay, maybe this is “The Shot”

If anything deserves to be dubbed “The Shot,” it might be this one. It was so good and timely that we’ve forgotten how sick Marcus Paige’s was seconds before.

Villanova and North Carolina faced off in the 2016 National Title game, which had one of the illest finishes ever. Paige, with nine seconds left, barely received a pass while on the right wing. With seven seconds, he rose up, while double teamed, and double clutched, making a game-tying three, forcing a 74-74 score.

Villanova, with 4.7 seconds left, inbounded the ball to Ryan Arcidiacono, who found Kris Jenkins open at NBA-range above the key, and drilled home a game-winning three as time expired to win the title. Additionally, we got the best-timed confetti shot in sports history (PTSD warning).

It’s really hard to have a better Final Four than Arike Ogunbowale did in 2018.

Many of the same UConn women mentioned earlier were back for their 2018 run, which included a match-up with Notre Dame in the Final Four. Ogunbowale missed a free throw in overtime to make it a 90-86 game, allowing for Crystal Dangerfield to hit a game-tying three. Notre Dame struggled to find Ogunbowale due to UConn’s pressure, but eventually did with eight seconds left. She dribbled right, got the mismatch with the bigger Naphessa Collier, crossed over, had enough space and sunk the game-winner with one second to spare. Notre Dame won 91-89.

Then, in the National Championship, Notre Dame drew Mississippi State. Tied 58-58 with eight seconds left, Ogunbowale forced a turnover and began pushing up the floor before Notre Dame regained possession with five seconds left, and called a timeout with three seconds to go. Off the inbound, the Fighting Irish found Ogunbowale, who hit the game-winner as time expired from a very similar spot to the one from two days prior. It’s one of the coldest weekends a ballplayer could ever have.

Younger generations might be more familiar with Jimmy V the week as opposed to Jimmy V the coach, but Jim Valvano and the North Carolina State Wolfpack shocked the world around this time nearly 40 years ago. NC State was a sixth-seed and opposite of a top-seeded Houston team that was engineered by Hakeem Olajuwon and Clyde Drexler.

Tied at 52, NC State was dribbling out the clock to hold for the final possession. As Houston inched closer to forcing a turnover, guard Dereck Whittenburg had to heave one with three seconds left well beyond 30-feet. Noticing it was going to be an airball, Lorenzo Charles got into position, rose up, caught and dunked the ball as time expired, giving NC State their first and only title.