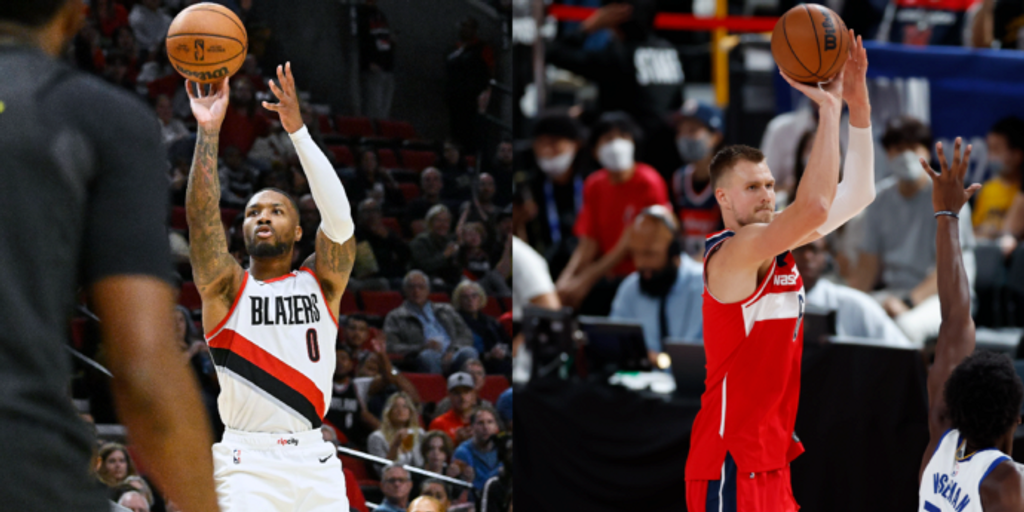 NBA Stats Notebook: 5 players who could have bounce-back shooting years

It's hard to predict when a slump ends without the benefit of hindsight.

Even the best NBA shooters are vulnerable to outlier struggles that can last an entire season, and those years jump out at you on the stat sheet. But how do we distinguish between an outlier and a harbinger before letting the full story play out? With so much context to account for — new teams, new roles and changing health status — that becomes a challenging question to address.

In this week's NBA Stats Notebook, we'll highlight five players with enough indicators to make me believe that they'll bounce back from last year's struggles. By no means are these predictions a guarantee, however, as I also outlined what hurdles could stand in the way of them getting back on track.

Bey is a quiet, but still vital piece to a Pistons rebuild that has quickly ramped up. The 2020 first-round pick logged some massive games last season, including a 51-point explosion on March 17. But he took a step back as a perimeter scorer on a team with few reliable long-range threats; Bey sported a 34.6% three-point clip that isn't horrendous, but still feels disappointing given his stature as a spacer.

With that said, Detroit fans should bank on a big swing. For starters, the Pistons added Jaden Ivey, who will command quite enough attention as an individual scorer. Cade Cunningham should improve his own perimeter presence, and Bojan Bogdanovic joins the squad as an immediate marksman. To his part, Bey should get more catch-and-shoot chances and create less as a pull-up scorer, which should in turn help his final percentage.

Bey is a much better shot-maker off the catch. According to InStat Scouting, he knocked down a whopping 51.4% such threes in his sophomore year at Villanova. So, even though he doesn't have a long NBA track record yet, Bey has proven himself as a shooter and should continue to this season.

Additionally, Bey seems to be merging the 3-and-D role that began his career with some of the off-dribble skills he added last season, according to James L. Edwards III of The Athletic. I'm happy to bet on natural growth from a young player and more manageable responsibilities, giving Bey a path to success.

the second most 3s in a playoff game in Mavs history pic.twitter.com/4y6diQm2ZP

Kleber's shooting slump already ended in the 2022 postseason. The stretch big man was unreal for the Mavericks last spring, knocking 'em down to the tune of 43.5% from distance in Dallas' three series. That dwarfs the 32.5% rate he posted in the regular season, which was the worst since his rookie year.

The 30-year-old has made strides with his NBA shot since entering the league in 2017. His catch-and-shoot clip improved for four straight seasons (up to 41.0% in 2020-21) before it took an absolute nosedive to 32.9% last year. Kleber's 2021-22 struggles are not a fair indicator of his career growth.

His health, however, is a fair question mark. Kleber battled injuries at five different points of last season, per Fox Sports. To build a rhythm, he needs a string of good fortune. Hopefully the Mavs' beefed-up big rotation, including new additions Christian Wood and JaVale McGee, can lessen the load.

"I just felt relaxed. I just wanted to come out and have fun, just hoopin' again."

Damian Lillard on his first game in 10 months

"I was just happy that I felt good out there. I didn't have anything on my mind other than just playing"#RipCity | @Dame_Lillard pic.twitter.com/WvohbUbJOm

Dame Time is one of the best pull-up scorers basketball has ever seen. But between coming back from the Tokyo Olympics, injuries, team discord and his own lackluster play, Lillard's 2021-22 was a derailment from his past superstardom. He played just 29 games before shutting things down as the Blazers hit mini-rebuild mode. In those contests, Lillard made a career-low 32.4% of his triples.

According to PBP Stats, Lillard converted just 29.8% of his "self-created" three-point attempts (shots coming after having possession for at least two seconds). That's by far the lowest rate of his nine-year career to date. Lillard typically hovers around 35% on self-created threes. Can he get back there?

The positive argument claims that Portland is in a far better offensive situation. Jusuf Nurkic is healthy, Jerami Grant is a nice acquisition and, though CJ McCollum is gone, Anfernee Simons appears capable of filling his shoes. The counterargument: Lillard is 32 years old and coming off of a long recovery from an abdominal injury. He'll still be a star, but it remains to be seem how much Lillard looks like his usual self.

The case for a Robinson rebound year is easy. He's one of the best shooters in the world, and it's going to take more than one down season (in which he still made 37.2% of his threes, by the way) to jostle that reputation. Robinson knocked down just 34.7% of his catch-and-shoot triples in 2021-22; in his prior two years, he reached marks of 41.7% and 46.0%. He also actually made a career-high 45.1% of his pull-up attempts last season. Nekias Duncan even broke down why this slump was so odd early in the fall.

Robinson is, quite plainly, a much better shooter than he showed last year, and he even returned to his regular self as the winter went on. Robinson canned over 41% of his threes in three of the final four months of the regular season. The problem: His playing time also decreased in each of those months, and in the playoffs, the sharpshooter averaged just 12.2 minutes per game.

What is Robinson's place in this year's Heat rotation? He played 18 minutes in Miami's first preseason game, suggesting he's still a fixture in Erik Spoelstra's vision. If that's true, he should be an obvious bounce-back candidate. But Robinson has to keep that spot by shooting well and at least reaching the bar defensively for a tough Heat squad.

Porzingis was a shooting mess with the Mavericks last season before somewhat regaining his perimeter success following a trade to Washington. But across his 75 games, he made just 31.3% of his threes after holding the ball for less than two seconds — easily a career-low percentage.

Fans should be confident that rate rises; it's unclear to what extent. Porzingis has always been a somewhat streaky scorer, which unfortunately fits right in with a lot of Washington's current offensive threats. As with Kleber, health also plays into developing some consistent momentum as a shooter. Porzingis has the history of prolific perimeter prowess, though, with some of the more difficult shot diets for an NBA big man.

Wembanyama finishes with 7 three-pointers and 5 blocks, something that's only happened once in NBA history

The NBA record that everyone assumed would never be broken, suddenly feels very...breakable 😂 pic.twitter.com/RrpQ8Yw2v5

Last season, Malcolm Brogdon's pick-and-roll proficiency ranked near the top of the league. Check out how his pick-and-roll advantage creation ability stacks up with the rest of Boston's returning players: pic.twitter.com/bErVKOIHBY