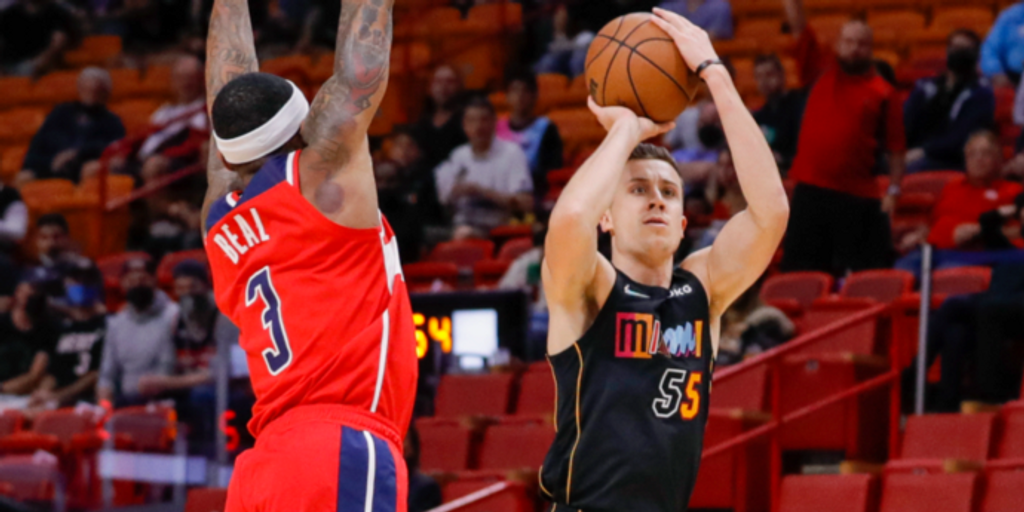 The timeline of Duncan Robinson's NBA career would barely be a believable sports film.

He went undrafted before landing a two-way deal with the Miami Heat back in 2018. Snatched up due to his shooting prowess at Michigan, Robinson appeared in 15 games and shot 28.6% from deep in his inaugural campaign.

During training camp before the following season, an Erik Spoelstra proclamation made the rounds: Robinson, fresh off that season (with limited reps, to be fair), was one of the best shooters in the world.

"Duncan has put in as much time as anyone in the gym and on his shot,” said Spoelstra. “I’ve said this for a while, he’s one of the best shooters on this planet. He just has to prove it now. He’s put in the work. He’s put in the sweat. He’s put in the grind. He is hungry. He’s driven. He’s ambitious. He is a Miami Heat player. That stroke, three-point shot is not there by accident. There’s a lot of hours behind the scenes when no one’s watching. Now he just has to put it to the wood when the games count. I think he’s ready for that.”

At best, it was an aggressive, if not unprecendented vote of confidence for an undrafted player. It was without merit on the NBA level to that point, but Spoelstra ended up being spot-on. Robinson put together the most prolific three-point shooting season in Heat history that season, draining 44.6% of his triples on 8.3 attempts.

Defenses adjusted some last season, top-locking him more aggressively and more frequently cutting off his water with switches or traps. With Jimmy Butler and Bam Adebayo (and just about everyone else in the main rotation) taking turns missing time, it became easier to hone in on Robinson in half-court sets.

Enter this season, with Butler and Adebayo back in the fray. Kyle Lowry, a multi-time All-Star point guard, was brought in to juice the transition attack and help with creation duties. Behind that three-headed monster, Robinson was, in theory, set to get the easiest shot diet of his career.

So of course, things have fallen off a cliff.

Robinson's three-point volume is up again (9.1 attempts), but the efficiency has not followed. His 32.8% mark from three is the lowest since his small-sample rookie year. He's knocked down just 30% of his threes (8.6 attempts) over the last seven games, including a 1-for-9 effort against the Denver Nuggets on Monday night.

Oddly enough, it's the easier shots — catch-and-shoot jumpers — that aren't falling. He's knocking down a respectable 38.5% of his pull-up threes (1.9 attempts), but only 31.1% of his standstill shots (7.2 attempts). Let's just say this isn't what we're used to.

It begs the question: Is something wrong, or is this just an annoying slump that'll correct itself?

While I'm inclined to believe the latter, I took on the task of watching all 192 threes that Robinson has attempted this season to see if there were any trends to keep an eye on.

What immediately stands out is, yes, Robinson is missing a bunch of looks he's made over the last two seasons. The overall catch-and-shoot number is rough enough; the fact that he's shooting 33.8% on "open" threes — defined as the nearest defender being 4-to-6 feet away — is puzzling, to say the least. He was knocking those down at a 40.7% clip last season.

To that point, I'd keep an eye on Robinson's comfort when going right. If there's a low-hanging-fruit thing for him to grab, it's doing a better job of squaring himself and getting the appropriate lift when he's flowing that way. It's pretty noticeable when he's relocating.

While the open shot thing should correct itself to a degree, the tough shot-taking has seemingly caught up to him this year. Here are his numbers on "tight" threes, defined as the nearest defender being 2-to-4 feet away.

It would make sense that teams would defend him more tightly; the dude can shoot the leather off the ball. A counter to this would be pump-faking against a hard close-out before taking a triple. That Robinson is taking 1.5 threes after a singular dribble — and canning them at a 40.6% rate — suggests that it's something within his wheelhouse.

Those shots would likely classify as tightly contested shots, but they're the "right" kind of contested shots, if that makes sense. For the 2K players out there, the "Blinders" badge would probably activate on these.

I'm not super worried about Robinson long-term. He's too good of a shooter for the open shots not to fall at some point. The counters to aggressive close-outs are within his reach, though it'd be nice if he gained comfort with pull-up twos at some point. Let NBA.com's tracking data tell it — Robinson has attempted two pull-up middies this season.

But no, he hasn't forgotten how to shoot. No, moving him to the second unit isn't the answer; there's no real need to mess with what Tyler Herro (get well soon!) is doing off the bench, and I'm not sure Max Strus is ready to consistently face starters yet.

Robinson should be fine.