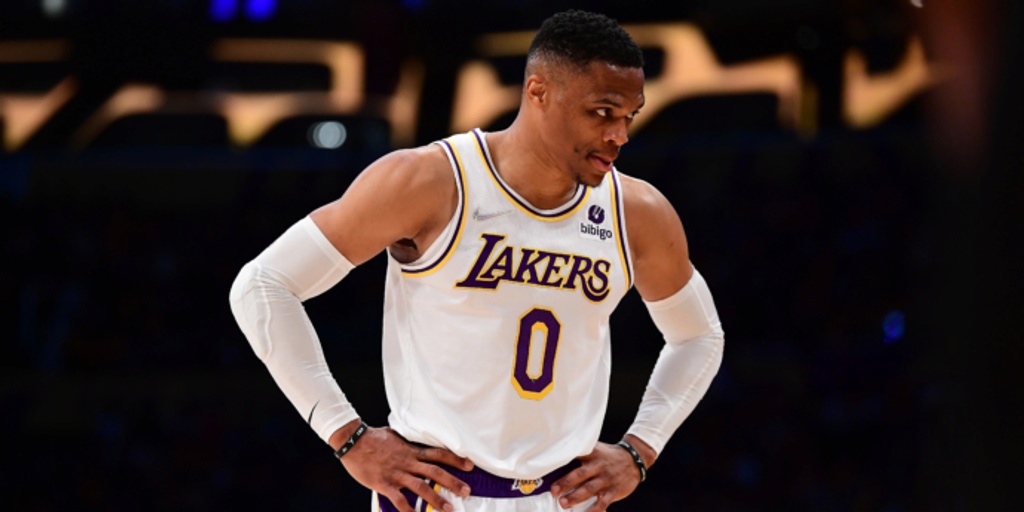 Russell Westbrook's late-game shot was bad, and it's okay to say it

Discussing Russell Westbrook in public forums can be exhausting for everyone involved.

There doesn't seem to be a middle ground anymore; he's treated as either the worst player to pick up a basketball, or an electric ball of awesome who only receives criticism from soulless haters. He's a lightning rod in that way — easy to love, but also easy to trash depending on what your rooting interests are.

There should be some consensus here, though: Westbrook's pull-up middy with roughly 30 seconds to go was a terrible decision.

Here it is, in all its glory — in addition to Patrick Beverley's flop that was eventually overturned.

Anytime your broadcast team hits you with a "Noooooo," you've probably messed up something serious. Just ask Denzel Valentine.

First and foremost, the concept of a 2-for-1— with the goal being to garner an extra (late) possession — only makes sense when your team is tied or losing. You're virtually guaranteed to get an extra possession otherwise because the opposing team is gunning to tie or take the lead from you. If they miss, they'll either be defending a last shot from you or playing the foul game.

That's just how it works.

On a related note, the shot Westbrook took literally hasn't been seen in four years. Four years! This isn't a regular occurence, so the push to frame it as one — even as an understandable sign of support — flies in the face of logic and evidence.

Russell Westbrook has made 3 of 17 jump shots this season.

Also, he is the only player that has attempted a jump shot with under 30 seconds to go and 15+ seconds left on the shot clock with their team up by 1 possession in the last 4 seasons. pic.twitter.com/DrH8UEs2L9

It's important to note the specific "up by one possession" wording here. That expands it to leading teams who were up by 2 or 3 points. The fact that this was a 1-point game makes the choice even worse.

The only way you can begin to defend the decision to take the shot that early is if you're under the impression that the Portland Trail Blazers would attempt to hold for the last shot otherwise.

Down a singular point.

I'm going to go out on a limb and say the Blazers wouldn't have done that, nor would any team with a semblance of common sense.

The math would be a little different if the game was tied, but even there, it'd be fair to question who was taking the 2-for-1 shot. And considering the 1-point lead, it's even more reasonable to criticize the shot-taker here.

Somehow, there isn't consensus that this was a poor decision. Lakers head coach Darvin Ham mostly defended the move, with the only correction being offered (publicly) Westbrook attacking the basket instead of taking the jumper.

Reporters asked LeBron James about shot selection, and then late-game shot selection — obviously hinting at the Westbrook shot — before LeBron shut it down.

It's admirable that Ham and LeBron had Westbrook's back. Based on the level of vitriol Westbrook has received during his Laker tenure — some that has extended to his own family — it's understandable why neither party seemed willing to publicly criticize the shot. If I had to guess, a discussion has been, or will be, had during a film session soon.

Even with that caveat, there's a spectrum between blasting the dude after the game and defending the move. LeBron taking the "I'm not doing this with y'all" route was much better than Ham essentially OK'ing the concept. Accountability was one of the primary calling cards for the Ham hire; saying "I don't mind the 2-for-1 at all" simply isn't that.

With that said, the pull-up doesn't mean Westbrook is some irredeemable player. LeBron's response shouldn't be taken to the 'nth degree. Ham's response doesn't mean he isn't or won't be equipped to navigate these types of situations moving forward. Even within that game, there were multiple possessions afterwards for the Lakers to pull out the win.

There's no need to call for heads, but we should be okay with saying a bad thing was a bad thing.

Going for the 2-for-1, up a point, was a terrible decision.

And having a terrible shooter make that decision compounded things.