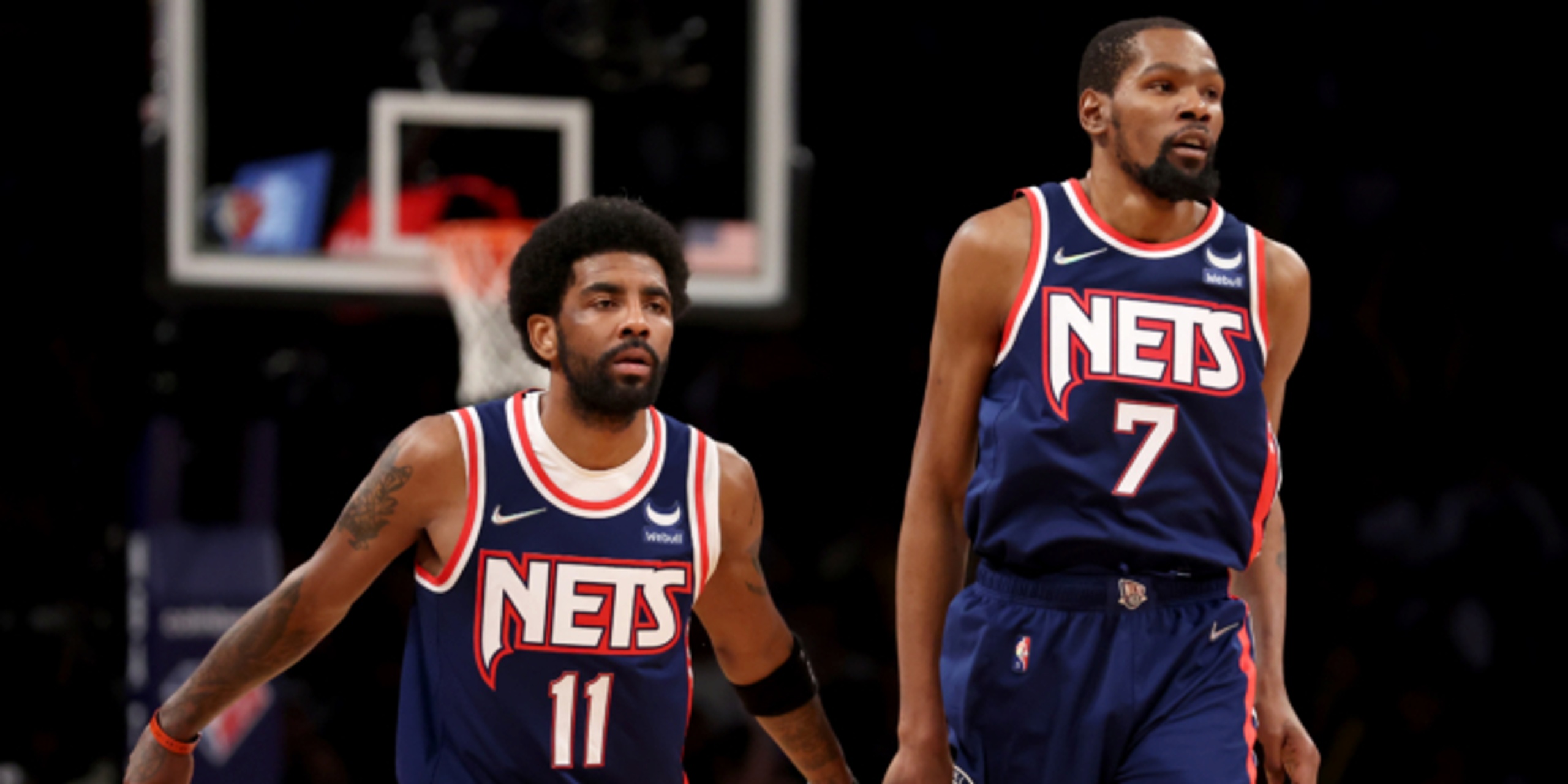 The 2022 NBA Draft is hours away, and the rumor mill is churning. BasketballNews has compiled every major rumor to keep you up-to-date on the latest rumblings around the Association.

If you missed yesterday's NBA Rumors Notebook with updates on Malcolm Brogdon, John Collins, Gordon Hayward and more, check that out here.

Without further ado, let’s jump into the juicy intel.

On Wednesday, ESPN’s Adrian Wojnarowski dropped this blockbuster nugget in his ESPN+ story detailing the the uncertainty surrounding the Nets and Kyrie Irving. Woj said that the star point guard has a huge leverage play in negotiations: Irving knows that if the Nets refuse to sign him to a long-term extension, Kevin Durant will soon follow him out the door in Brooklyn. Wojnarowski said the Nets are aware of this situation, so their front office is trying to walk this tightrope.

Longtime NBA insider Marc Stein added on Substack that he’s heard Irving and LeBron James have been in contact recently, potentially about reuniting on the Los Angeles Lakers. Wojnarowski relayed on NBA Today that the Lakers are considered "the biggest threat" to acquire Irving outside of Brooklyn too. Also, Stein said don’t rule out the Miami Heat as a possible suitor via sign-and-trade.

The Irving drama has already created a negative impact on the Nets’ free-agency plans. Wojnarowski said on NBA Today that Brooklyn is having a hard time retaining their own free agents, plus Durant isn’t recruiting potential names to the Nets as well.

"In previous offseasons, rival agents and players would tell you of Durant's eagerness in talking to potential free agents. So far, that hasn't been the case with him, sources say," Wojnarowski wrote on ESPN+.

Durant has also been putting pressure on the Nets to sign Irving long-term, per Wojnarowski.

All of a sudden, the possibility of the Nets breaking up feels very real. Could we actually be looking at a scenario where Durant is requesting a trade over the next few weeks? If Irving's contract situation isn’t resolved soon, it sure feels like it.

According to Yahoo Sports’ Chris Haynes, the Portland Trail Blazers aren’t done trying to make massive moves to improve their roster. After acquiring Jerami Grant for a bargain price on Wednesday, Haynes relayed that Portland is offering the Toronto Raptors the No. 7 overall pick in today's NBA Draft in exchange for versatile wing OG Anunoby.

There has been persistent smoke surrounding Anunoby in trade talks over the last few weeks, and now things have kicked into overdrive.

If the Blazers are able to land Anunoby alongside Grant, it’s a dream wing pairing to place alongside the high-usage backcourt of Damian Lillard and Anfernee Simons. Assuming Portland also re-signs Jusuf Nurkic, they could become a playoff contender once again.

Deandre Ayton may have played his final game with the Phoenix Suns. Even though things seemed to be heading in this direction after the Suns' shocking postseason exit, Wojnarowski confirmed Wednesday on NBA Today that the organization doesn’t view  their former No. 1 overall pick as a max-level player. Woj added that Phoenix plans to engage in serious sign-and-trade discussions surrounding Ayton.

Keep an eye on the Detroit Pistons as a potential landing spot for Ayton, especially after the Grant trade went down. The Pistons now have more than $40 million in cap space, which means they can offer Ayton a max contract without any hiccups. According to The Athletic’s James Edwards III, Detroit is “heavily expected” to pursue Ayton.

Will James Harden opt in?

Wojnarowski mentioned on NBA Today that James Harden was likely to exercise his $47 million player option for next season and sign a short-term extension with the Philadelphia 76ers. Harden’s new deal with Philadelphia will come in at a figure slightly below the max, as Woj relayed on ESPN2. This lines up with a recent report from Jake Fischer of Bleacher Report.

Philadelphia has already been linked to Eric Gordon and PJ Tucker this offseason, so we'll see if the 2018 Houston Rockets are planning a reunion. Would adding Gordon and Tucker be enough to put Philadelphia over the top in the Eastern Conference?

The Sixers are also shopping the No. 23 overall pick, Matisse Thybulle and Danny Green, per Fischer.

According to ESPN’s Jonathan Givony, the Oklahoma City Thunder are aggressively trying to trade up from No. 12, with their primary targets being Purdue’s Jaden Ivey and Kentucky’s Shaedon Sharpe.

The Thunder are hoping to come out of this draft with two of the top prospects; OKC also has the No. 2 and signs seem to point to them taking Chet Holmgren.

Could you imagine Oklahoma City trotting out a core that features Shai Gilgeous-Alexander, Josh Giddey, Holmgren and either Ivey or Sharpe? That’s simply unfair.

According to Bleacher Report’s Jake Fischer, the San Antonio Spurs and Atlanta Hawks have discussed a deal that would involve swapping Dejounte Murray and John Collins. Fischer noted that the price for Murray to leave San Antonio would be “Jrue Holiday-like” in terms of the return. If that’s the case, the Spurs would likely have to part with multiple first-round picks to land the versatile guard.

The Athletic's Chris Kirschner joined BasketballNews' Twitter Spaces last night and confirmed that these talks are ongoing, but added that a deal isn't close. He has also heard that the asking price for Murray is significant.

With this coming out of nowhere, it wouldn’t be a surprise to see the Spurs be a very aggressive team during tonight's NBA Draft.

Stein reported on Wednesday that the New York Knicks are viewed as a real threat to sign Jalen Brunson, if they can clear the necessary cap space. The Knicks are trying to offload the expiring contracts (if you count their 2023-24 team option) of Alec Burks, Kemba Walker and Nerlens Noel. Wojnarowski added later in the day on ESPN2 that New York will be aggressive in clearing said space.

Stein dropped another Knicks-related note involving underrated rim protector Mitchell Robinson. According to Stein, the Knicks are expected to re-sign Robinson, which may close the door on potential draft options like Memphis’ Jalen Duren or Duke’s Mark Williams at No. 11 overall.

Yesterday, ESPN’s Brian Windhorst mentioned on NBA Today that New York has been unwilling to include No. 11 in any trade talks involving Pacers point guard Malcolm Brogdon. The availability of Brogdon continues to be a hot topic, which included Fischer reporting that league executives believe Brogdon is the Knicks' backup option after Brunson.

On ESPN's NBA Mock Draft Special on Tuesday, Wojnarowksi said that the Pacers plan to reshape their roster and move toward a rebuild under head coach Rick Carlisle. Woj added that Indiana is hopeful to add a second lottery selection since there are multiple prospects they like in that range.

The full expectation is that Brogdon will be moved soon. However, when it comes to Myles Turner's future, the Pacers may wait for better offers or hold onto him long-term. Both Brogdon and Turner have constantly popped up in trade rumors, and that likely isn't changing until there's a resolution.

Indiana deciding on a full-scale rebuild opens up a lot of roster possibilities, and it further suggests that Brogdon, Turner and maybe even Buddy Hield could be on the move. Leading up to the draft, Indiana continues to be one of the most active teams on the trade market.

Fischer mentioned on Wednesday that the following teams have shown interest in a Turner trade: the Toronto Raptors, Minnesota Timberwolves and Charlotte Hornets.

Speaking of the Timberwolves, another interesting tidbit was shared on Wednesday morning by The Athletic’s Jon Krawczynski: Minnesota has not come close on any potential trades involving D’Angelo Russell or any other players. Russell is on the final year of his contract, but his season ended with some fourth-quarter benchings in favor of Jordan McLaughlin during the playoffs.

Timberwolves president of basketball operations Tim Connelly told reporters on Wednesday that the organization is “super open” to trading the No. 19 pick. Connelly added that they would welcome a win-now piece in exchange for the top-20 selection.

Cavs open to trading back?

According to Chris Fedor of Cleveland.com, the Cleveland Cavaliers are open to trading back from No. 14 overall. This lines up with what HoopsHype's Michael Scotto reported earlier this week. Scotto added that the Minnesota Timberwolves, Memphis Grizzlies and Milwaukee Bucks have called about the No. 14 pick.

Holding the final pick in the lottery, Cleveland could fetch a solid return on the trade market. The Cavs are reportedly hoping for a future first-round pick, but they’re open to adding a win-now role player in a trade-back scenario as well.

If the Cavaliers are able to move back while also improving the top of their rotation, it would be a huge win for the up-and-coming team.

According to Fischer, the Suns have reached out to rival teams to gauge Jae Crowder's trade value. Over the last two seasons, Crowder has played a pivotal role in the Suns’ historic turnaround. However, with a looming extension for Cameron Johnson, it could make sense to clear more playing time for he and Mikal Bridges on the wing.

Phoenix has no picks tonight, but they are rumored to be interested in getting into the draft. While they have looked into buying a second-round selection, perhaps trading Crowder could get them into the first round.

If the Suns send Crowder to Philadelphia for the No. 23 pick and Danny Green’s non-guaranteed salary, would that make sense for both sides?

According to Fischer, the Wizards are open to discussing Kuzma and KCP in deals. Earlier in the week, Wojnarowski listed Washington as one of the most active teams in trade discussions.

After a strong season with the Wizards, Kuzma could provide a strong return. KCP’s expiring contract would be a strong match with Indiana for Malcolm Brogdon, which has been rumored for several days.

Closing out the notebook, here are two draft-related notes. First up, if the Portland Trail Blazers stay put at No. 7, they are reportedly fans of Dyson Daniels and Shaedon Sharpe, per The Athletic’s John Hollinger. Both Daniels or Sharpe could be real complements on the wing alongside Lillard, Grant and Simons. If Portland nails their lottery pick, they are set up to potentially rebound in 2022-23.

The New Orleans Pelicans’ top choices at No. 8 are Daniels and Arizona’s Bennedict Mathurin, per Fischer on his podcast. If neither Daniels nor Mathurin are on the board, New Orleans would be more inclined to listen on potential trade-back scenarios.

Buckle up, folks, as this is going to be a crazy day! BasketballNews will keep you updated on all the latest NBA news and rumors.