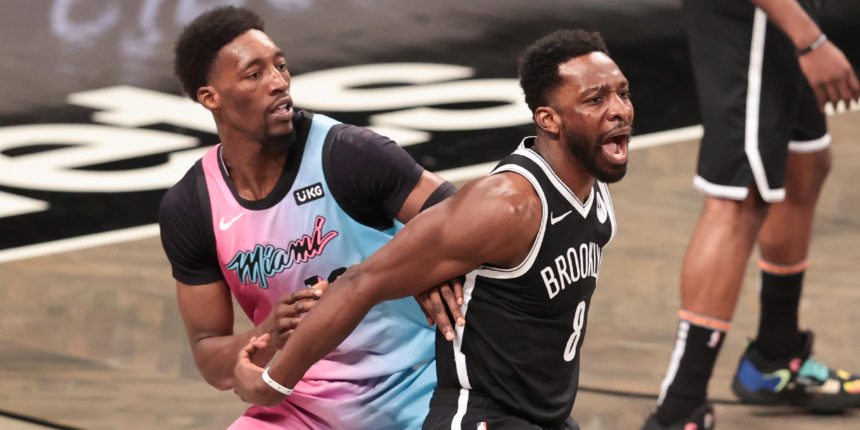 Where will Sean Marks find the Nets' next big man?

With all due respect to Reggie Perry, replacing Jarrett Allen in Brooklyn is a difficult ask. As we have seen since the Nets parted with Allen as part of the James Harden trade, they have a bit of a donut problem – a hole in the middle.

DeAndre Jordan is an accomplished NBA veteran who has been starting since Harden was traded, but he is now in his 14th NBA season, and has a lot of mileage on his wheels with 892 career games logged for the Clippers, Mavericks, Knicks and Nets.

Perry is a 20-year-old rookie who is 6-foot-8 and played power forward at Mississippi State, and asking him to be the backup center through the NBA playoffs is asking a bit too much.

In their five games since trading for Harden, the Nets have been outrebounded only twice – although one of those was a 50-29 discrepancy in a loss to the Cleveland Cavaliers. Two nights ago against the Miami Heat, Brooklyn avoided getting outrebounded by having everyone attack the boards. Bruce Brown joined Jordan with eight rebounds apiece, Harden had seven and Kyrie Irving had six.

Perry and Jeff Green each had six boards in that game, which was more than Heat center Bam Adebayo  had (five) in his career-high 42-point effort.

“If roster composition changes for the better defensively, that’s great,” Nets head coach Steve Nash had said last Friday. “But I don’t think we can rely on that because that may not be possible. You know, it’s not like they’re just falling off trees for us to pick up guys that are going to change our defense.”

There were reports Monday that Brooklyn would be interested in Cleveland’s JaVale McGee, and they could acquire him without sending back any salary by absorbing him into the Disabled Player Exception that they were granted following the season-ending injury to Spencer Dinwiddie.

But could the Cavs get more for McGee elsewhere?  That depends on whether Nets general manager Sean Marks would want to surrender a player or a second-round draft pick in a trade. The Nets’ own second-rounder is owed to Charlotte, but they have the rights to second-rounders from Indiana, Atlanta, Phoenix and Golden State between 2021 and 2025.

A league source said Brooklyn is looking at a variety of options and staying flexible, not feeling a need to commit to any specific player at the current time.

In a usual season, the Nets could look to the G League for help. But as we all know, this is an abnormal one because of the pandemic, and the G League will not begin its bubble season until Feb. 8. G League players begin reporting to the bubble at Walt Disney World on Tuesday.

Overseas, there will be options for Marks once the Chinese Basketball Association playoffs have ended, and maybe even sooner. In the Chinese Basketball Association, Donatas Motiejunas is leading the league with 15.6 boards per game with the Xinjiang Flying Tigers, but that team is currently in third place in the standings and could make a deep playoff run.

Considering Chinese teams that will not make the playoffs (and thus their players will become available in March), among the centers will be Arnett Moultrie of the Nanjing Monkey Kings, Marco Todorovic of the Tianjin Pioneers, Devin Williams of the Jiangsu Dragons, Isaac Haas of the Guangzhou Long Lions and Justin Hamilton of the Beijing Ducks.

But again, those players will not get letters of clearance to play in the NBA until their Chinese seasons are completed, and that is still several weeks away.

In the NBA, one name that could make sense is Hassan Whiteside of the Sacramento Kings. Whiteside was starting and putting up huge numbers for the Portland Trail Blazers last season before Jusuf Nurkic returned in the NBA bubble, and he has been used sparingly this season by Luke Walton backing up Richaun Holmes.

Whiteside is making a salary of $2.32 million that Brooklyn would have to match in any trade.