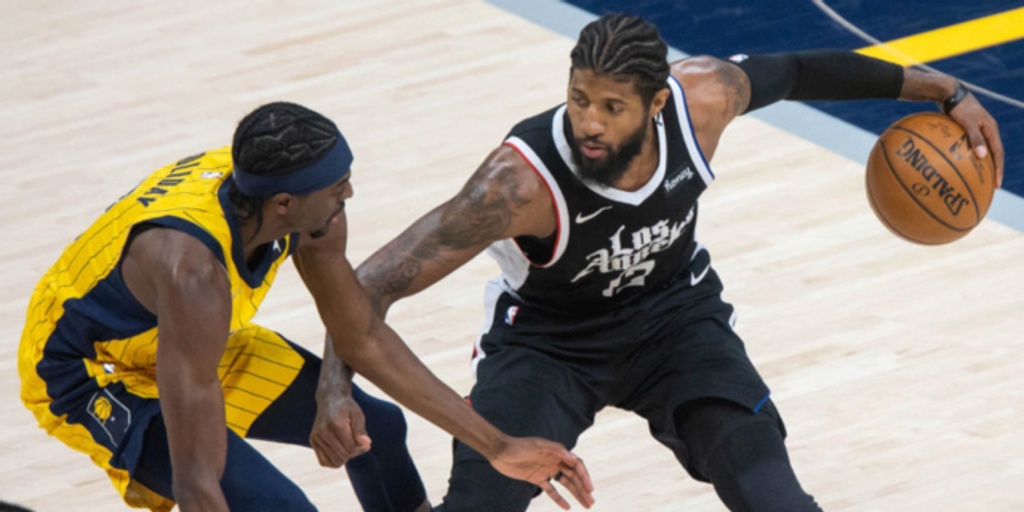 Don't look now, but the Clippers have won six in a row, and 12 of their last 14 games. They're getting a little bit of everything from everyone, though we should probably be paying more attention to Paul George's recent run.

He's tossing flames, averaging 28.3 points with a 51/54/97 shooting split. A 54 percent clip from deep on nearly seven attempts is absurd; the 5.2 free throw attempts in that stretch, as modest as that number looks on the surface, is the more important number to note.

We know what George can do as a shooter. He can kill drop coverage with pull-up triples. He's a monster off of corner pindowns or free-throw-line curls. Any semblance of space is an invitation to be picked apart with his quick trigger and high release point.

What's more encouraging is that George has tuned his attack method. The volume of his drives hasn't changed much -- breaking it down monthly, he's been floating between 12.2 and 13.1 drives per game since the turn of the year, per Second Spectrum tracking. George has been more forceful and more intentional with those looks.

The number of drives may not have risen, but his shot attempts have. He's putting up nearly seven shots on drives in April, and converting those at a 56.1 percent clip. The free throw attempts have risen in tandem with his aggressiveness.

While the Clippers have been an elite offense all year long, the lack of rim pressure has been a question mark with serious playoff implications. That's gotten better as of late -- the Clippers rank 12th in the percentage of shots at the rim (33.6) since March 17, per Cleaning The Glass -- and George has been a major reason for that.

"The reports of my death are greatly exaggerated."

The post-up ain't dead; the bar for success is just higher. The increase in weak side zoning, the added length and athleticism of digging defenders and a shift in developmental priorities for young big men have been key factors in the rate of post-ups going down across the league. That doesn't mean we don't still have practitioners.

Jonas Valanciunas is one of my favorite players to watch on the block. It's akin to a bear doing ballet -- a grizzly bear, if you will. He's a massive human, but a massive human with superb footwork and a slow-but-effective over-the-head fake that helps him get defenders off balance. The way he can dislodge dudes with his shoulder is high comedy, and a welcomed change-up from the Memphis floaterfest.

Valanciunas has been on fire as of late, averaging 22 points on 68.4 percent shooting from the floor in April. He's converted 12 of 22 shots (54.5 percent) on post-ups this month per Synergy, identical to his season average. Among 33 players that have logged at least 75 post-up possessions this season, Valanciunas ranks seventh in field goal percentage.

HE CAN'T KEEP GETTING AWAY WITH IT

Allowing McConnell to get to the baseline is a cardinal sin at this point. He's become one of the NBA's best Nashers, circling around the baseline to hunt dump-offs, kick-outs or quick-hitting turnaround jumpers.

Whether it's 14 or 15, I'm just going to assume that mark leads the NBA by a wide margin.

A question to ponder: Is there a player better at an obscure skill than McConnell is at pilfering after the inbound?

I'm open to hearing your suggestions.

Karl-Anthony Towns has been unleashed since the hiring of Chris Finch -- higher usage, more elbow touches, better numbers almost across the board. The high-post touches are key, as they allow the Wolves to maximize his scoring gravity and passing ability to unlock opportunities for others.

This is a beautiful switch-beater from the Wolves. After the pitch to Towns, D'Angelo Russell gives the illusion of screen setting. Jaden McDaniels instead ghosts the screen -- the best way to beat a switch is with a slip, folks! -- and jets to the basket. This puts Marcus Smart behind the play and causes Grant Williams to offer some help. The sink from Williams ultimately opens up a wider window for another cut, this time for Anthony Edwards.

If you're looking to find some fun in Magic games, as a fan or a neutral observer, try to track the way they generate looks for Terrence Ross. Always a gunner, he's become even more important to their offense due to his ability to bend defenses with movement.

We get some Iverson action at the beginning of the play (Ross running off the two elbow-area screens), though he cuts it short to set up a pick-and-roll...or so we think. A cross-screen underneath the basket frees Chuma Okeke (he's fun and good!) for a low-post touch. Mo Bamba then flips his screen to free Ross for a corner look.

It would've been nice if the Bamba screen was better -- a theme for him at this stage -- but it's essentially an empty corner with built-in counters depending on the way it's defended. I like the design.

The Power of Gravity

A double-stagger look for Lillard ends with an Enes Kanter layup. How?

It all boils down to the Heat being terrified of what Lillard can do with the ball in his hands. As he begins to come off the first screen, he cuts his path short to screen for Robert Covington. Against normal humans, the Heat would simply switch it. But because Lillard is the screener, Jimmy Butler outright refuses to give up the assignment to Duncan Robinson.

This kicks off the chain of events. Covington comes off the screen, forcing Bam Adebayo to leap out to prevent an open triple. Kanter slips to the rim and gets a layup because Butler is behind the play. Despite not touching the ball, the two points scored are a direct result of Lillard.

Anyway, here are some -- not all, but some! -- of the stories I’ve read this week (since April 7) that I think you should check out. Their Twitter handles will be linked under their names, so click and follow if you don’t already.

A double dip from Katie Heindl (please follow her) -- a research-heavy piece on the rise of soft-tissue injuries in the NBA this season, and a dope feature on Hawks guard Kevin Huerter.

Marco Romo gives some love to Terance Mann for becoming an important role player on a title contender.

Jackson Frank on the development of Michael Porter Jr. on both ends.

Chris Herring on Jalen Brunson operating as a great complement to Luka Doncic.