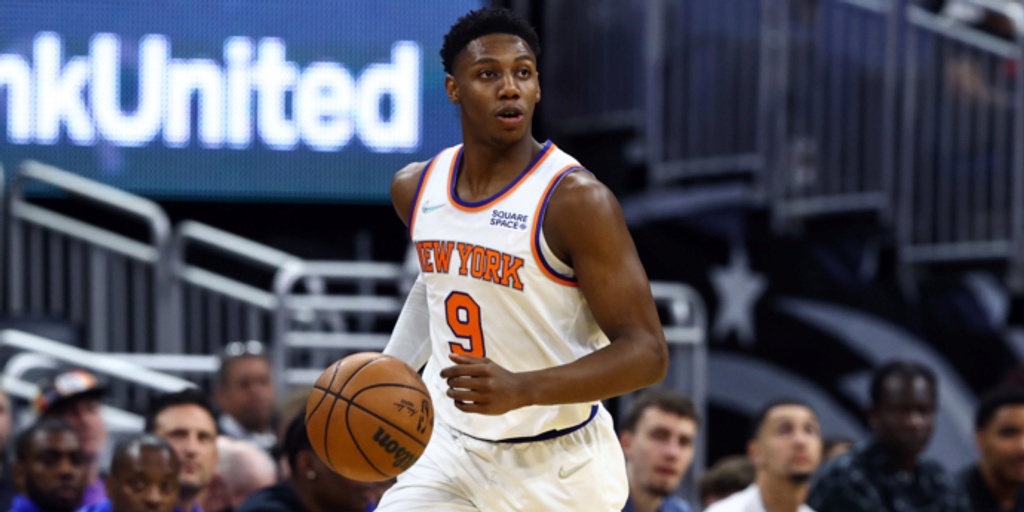 We need a bit of context to truly grasp the remarkable nature of RJ Barrett's development in the NBA.

Barrett just wrapped up his third professional season and turned 22 years old in June. He is younger than several incoming rookies, including No. 14 overall pick Ochai Agbaji and No. 31 pick Andrew Nembhard. He recently signed a four-year contract extension worth $120 million — a lot of money for sure, but nowhere near the rookie maximum.

Yet, despite these indicators that Barrett is still a very young basketball player with ample room to grow, he is already taking on some of the heaviest two-way physical demands we've seen from someone his age.

The third overall pick from 2019 averaged 13.7 adjusted drives per 75 possessions in 2021-22. Barrett attacked relentlessly, and far more than his New York Knicks teammates. Driving with the basketball is one of the most taxing moves a player can make on offense. It requires the wherewithal to handle the ball and assess the court's shifting spaces, the lower-body strength to explode by defenders and the core and upper-body strength to fend off contact and, then, shoot or pass. These bursts of energy, physicality and processing are not easy to successfully replicate over and over.

And that's just one side of the game. Barrett also graded out as a defender who faced some of the toughest opponents. The BBall Index has created a Matchup Difficulty metric to try and quantify this. Barrett earned a plus-1.66 score, meaning his defensive assignments were more challenging than 95% of the NBA — requiring an elite combination of physical tools, focus and understanding of concepts to be successful.

With a few charts (sourced from BBall Index), we can place Barrett's responsibilities in the wider frame of the league. Here's a plot of every NBA player who logged at least 1,000 minutes and their numbers in those two categories. I additionally colorized the dots with BBall Index's Defensive Role estimator to add some clarity about what might be changing on defense. Several of the league's most frequent drivers — Shai Gilgeous-Alexander and Luka Doncic, for example — had very low matchup difficulty scores on defense, and their roles were even estimated as "Low Activity." Then, you have the elite defensive stoppers in the top-left corner who barely drive the ball. Barrett, who is labeled in yellow, kind of balances in the middle.

Zooming in gives more of an appreciation for his company. The below chart cuts off at 8.0 drives per 75 possessions; it's an arbitrary choice, but a fair one, I think, that encompasses just under 100 players. It also begins vertically at a matchup difficulty rating of zero. I won't break out the ol' AP Stats textbook, but these scores are based on Z-Scores that relate to each other, meaning a "zero" is average among the NBA. With these boundaries, we get down to 55 players: Barrett stands out more clearly here as a player who drives frequently before turning around and staring down tough defensive assignments. He's in the company of household names like Jrue Holiday, Jimmy Butler and Fred VanVleet, and he's one of 10 players in this chart who was under 22 years old last season. This isn't to say he matches the impact, of course, but Barrett has a general reputation as a quality defender for his experience level.

This could be restricted even further to players who only take on very difficult matchups. If we cut the chart at 1.0 (about the 84th percentile for Matchup Difficulty), Barrett would be one of only 15 players to stay on the board — and one of only three players 21 or younger, along with Kevin Porter Jr. and Jalen Suggs.

This type of two-way role is exceptionally unusual for someone of Barrett's age and position. Take a look at the 21-and-under players sinced 2014 who have averaged at least 8 drives per 75 possessions with a Matchup Difficulty score over 1.0: 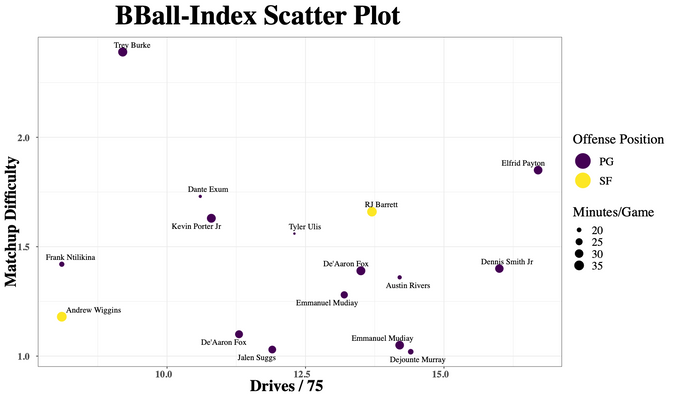 Sixteen seasons make the cut. Fourteen of those seasons were from young point guards, who often got thrown into the fire with bad teams. Second-year Andrew Wiggins is the only other wing, and he barely cleared the thresholds (and wasn't nearly as good a player).

Barrett is one of the youngest two-way catalysts in the NBA, and he's taken on the responsibility with relative success. Oh yeah — and he's playing on the biggest stage in the country.

Obviously, though, he can be better, as he referenced on Monday's live stream interview discussing his new contract.

"I'm always working on my finishing, and just being able to shoot [and] shoot off the dribble," Barrett told Monica McNutt. "Many things. Free throws — holy, we've been shooting a lot of free throws, things of that nature."

Barrett averaged 16.2 drives per game after Jan. 1, which ranked eighth across the entire league, per Second Spectrum. But he made just 41.1% of his shots off of drives, ranking third-worst among 64 players who drove to the basket at least 8 times per game. His overall at-rim clip of 55% ranked in the 15th percentile among wings, according to Cleaning the Glass.

The finishing, despite Barrett's superb and improving aggression, remains perhaps the biggest target for critics. It's an area several leading basketball minds have dissected, and a place that can turn him from a volume-based scorer into a dominant, efficient spark.

Sam Vecenie of The Athletic noted how important it is for Barrett to develop a right-hand finish. To piggyback, according to InStat Scouting, Barrett made just 36% of his at-rim attempts with his right hand vs. a still-rough-but-better 40% (on over 280 more attempts) with his left.

Mark Schindler detailed for UPROXX how improving pull-up and foul-grifting games could help Barrett keep defenders on their toes against his drives. Barrett is drawing more fouls; per Cleaning the Glass, 14.7% of his shots came with a whistle, placing in the 92nd percentile among wings.

As Schindler wrote, Barrett has enticing potential as someone who can capitalize on second-side swings and kick-outs by continuing to apply pressure as a driver. He's strong and fast with a much-improved handle and court vision that is approaching refinement. But New York rarely surrounded its rising star with the right blend of spacing and complementary aggression.

This year, those pieces might come together, starting with new acquisition Jalen Brunson.

"Jalen's great. He's really smart. He's a hard worker; he works on his game a lot," Barrett said. "He has natural leadership ability too. Just being around him, guys gravitate towards him as well, so I think him and I will work together very well — especially us being lefties, that'll be very good."

Brunson is one of the elite driving threats in the NBA. I wrote about this specifically back when he was popping off for the Dallas Mavericks in the playoffs. Brunson has proven himself as both a secondary pressure-cooker and a lead initiator, and it's easy to see how he can ease some of the load on Barrett.

The Knicks also have Immanuel Quickley, who continues to be one of my favorite young players to watch in the league — full stop. Quickley has picked up his pace as an attacker; he averaged 6.6 drives per game before the All-Star break and 10.3 afterwards. Like Brunson, he's another point guard who doubles as a quality catch-and-shoot option, and deserves to start next season.

Julius Randle can hit the gas pedal, and he's due for a happy medium between his 2020-21 breakout and last season's struggles. Obi Toppin and Jericho Sims keep defensive help in check as lob threats. Evan Fournier can still shoot it (and is still only 29?). New York has enough support for Barrett to find those extra spaces to dribble, shoot or pass when he puts the ball on the floor.

Driving and guarding tough matchups is not the only example of a demanding two-way role. But it certainly is a big one. Barrett ran the ninth-most miles (2.63) per NBA game last season, and his average speed (4.30 mph) ranked 21st of 124 players who averaged two-plus miles per game. He played 70 games after completing a full 72-game season in 2020-21; the durability in his role is impressive.

Barrett is gaining more experience, and succeeding more frequently, in a context few players receive at his age. Yes, he can markedly improve in several areas. But the man has tons of time and is surrounded by teammates who can help him be successful.

The growing pains of a 22-year-old franchise centerpiece should not overshadow the unique trajectory of his stardom.