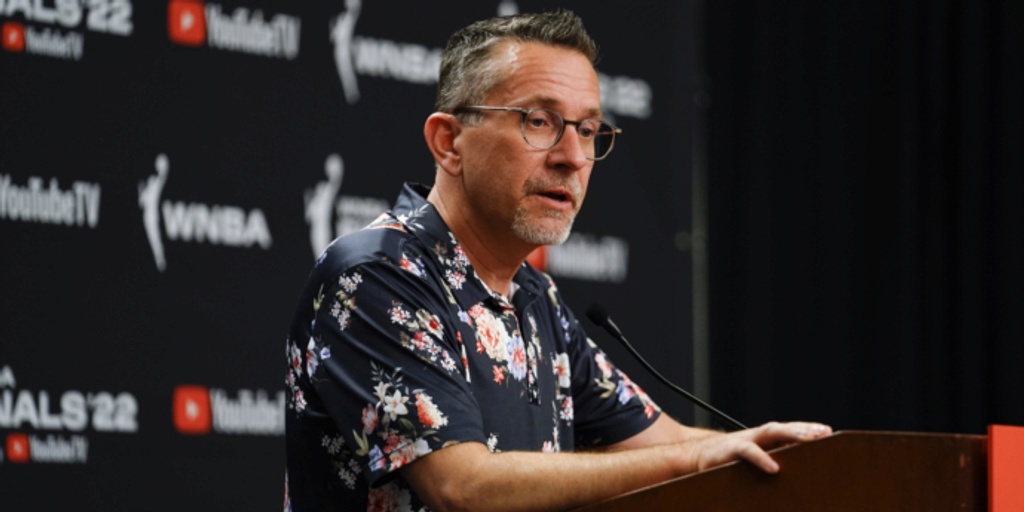 The Connecticut Sun were right there.

Following a 67-64 loss to the Las Vegas Aces on Sunday in Game 1 of the WNBA Finals, the general feeling around the team was one of hope. There was disappointment, of course — these aren't players or coaches that enjoy losing — but there was also a level of satisfaction with their game plan.

Connecticut head coach Curt Miller laid it bare in his opening statement following the game: "You know, [I'm] certainly disappointed for our locker room with the loss, knowing that we did so much that we wanted to accomplish defensively and got the game, the style of play that we were hoping for."

Miller would reiterate that he was "really pleased with holding that high-powered offense down and getting the style of play we wanted. We are encouraged, but I'm disappointed that it didn't equate to a win."

The Sun successfully brought the Aces, the second-most prolific offense in WNBA history, into their neck of the woods. Into the muck, into the mud. The Aces' mark of 67 points was a season low, and their total of eight assists was easily a season low. Connecticut was able to win the rebounding battle (38-33), double Las Vegas in paint points (40-20) and hold the Aces scoreless in transition while getting 12 points itself.

"I mean, they want to muck it up. Like, that's their defensive scheme," Gray told Basketball News when asked about her team's offensive flow.

"Second of all, I just have to do a better job of not turning the basketball over. Ten turnovers [as a team] isn't bad, but I had freaking six of them."

This is what Miller's Sun team does to people. They take the "easy" off the table and make you earn it. But because of their size advantage, they're able to expand their own margin for error. They couldn't knock down enough shots to take Game 1 — a 5-of-16 clip (31.3%) from three didn't help — but the blueprint has been clear all season.

Before Game 2 of the WNBA Finals, Basketball News was able to briefly catch up with Miller to discuss the Sun's process on both ends of the floor, as well as their last possession of Game 1.

Your defense is great, in large part due to the pressure you put on ball-handlers. You're able to disrupt things when you put two on the ball. The Aces are at their best when they're able to draw two defenders and play out of that. How do you balance sticking to what makes you great, and making sure the Aces don't have those automatic reads?

Miller: "Trying to get a team as talented as they are, out of rhythm is a challenge. You saw the first 4 to 6 minutes of the first quarter, and we couldn't cause any disruption. They were just rolling. But then you look at the last 34 minutes, and I think we did a really good job.

"You know, they run a lot of NBA actions to try to get switches and get matchups they want. It's very NBA-like. The challenge is: When they run that, can you prevent them from getting what they want and maintain the matchups and coverages that you want?

If I can transition to the offense...

A point of conversation surrounding the Sun has been the usage of Jonquel Jones. With her being as versatile as she is offensively, how do you balance using her as a spacer and opening up the floor for Alyssa Thomas and others, and getting her post touches?

Miller: "We're best when we have balance. The great part of our team — while everyone wants the ball and believe they could get a touch every possession — we're at our best when there's balance. JJ is really, really unselfish.

"At times, she could probably shoot through double teams and take difficult shots. But she passes on some of those shots, so we go from a good shot from her to a great shot from someone else. At times, it's finding JJ that balance of — you have to be selfish sometimes and demand the ball. Maybe a contested shot by her is better than a different shot from someone else.

"But yeah, the versatility in her game allows us to have some fun with Alyssa Thomas and opening up the floor and giving her some space to work with."

Last thing, if you're able to get into it: The final play call for DeWanna Bonner. From my angle, I couldn't tell if she was coming off a stagger (two angled screens) or if it was an Elevator play. Could you walk through what the play call was?

Miller: "We had a Side Elevator set up, but we had a bad angle. We executed early in that [play] to get the switch. We got a post player [Dearica Hamby] on DeWanna Bonner, and with Bonner running in space ... we had it. We had it! To illustrate, here's the live possession:

The Sun really could've had it.