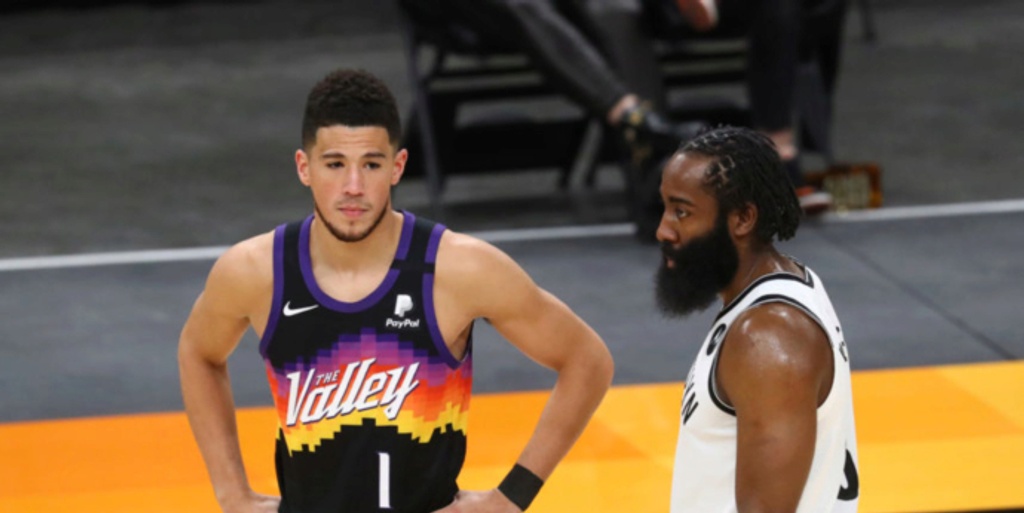 The NBA has announced its winners for the Players, Rookies, and Coaches of the Month awards for the month of February on Tuesday.

Phoenix's Devin Booker and Brooklyn's James Harden were each named as a Player of the Month for the Western and Eastern Conferences, respectively. This was the first time that Booker has been honored as the Western Conference Player of the Month in his career. In February he averaged 27.9 points and 4.5 assists per game while his Phoenix Suns went 12-3, shooting up to a tie for third place in the conference standings. As for Harden, it's the 10th time he's taken home a Player of the Month award, but he takes home this one in his first month as a player in the Eastern Conference. Harden has been a success so far for the Nets, and he averaged 25.6 points, 10.7 assists, and 8.8 rebounds while Brooklyn went 9-4 during the month. Both Harden and Booker were also named as All-Star reserves during February.

The Rookie of the Month awards went to repeat winners in February, as Charlotte's LaMelo Ball and Sacramento's Tyrese Haliburton both took home the Eastern and Western Conference honors, respectively. Both players also won the honor for the first month (classified as December/January) of the season as well. Ball has been stellar lately, as he averaged 20.1 points, 6.7 assists, and 6.2 rebounds for the Hornets in February. Haliburton has likewise been a brightspot for the Kings, averaging 16.2 points and 5.3 assists per game.

As for the Coach of the Month awards, those were handed out to Utah's Quin Snyder in the Western Conference and Brooklyn's Steve Nash in the Eastern Conference. The Jazz have been the NBA's hottest team, going 12-2 in the month of February as they currently sit atop the Western Conference and hold the NBA's best record at 27-8 heading into play on Tuesday night. As for Nash, he led the Nets to a 9-4 record despite not having All-Star Kevin Durant for much of the month due to the NBA's Health and Safety Protocol and a hamstring injury.