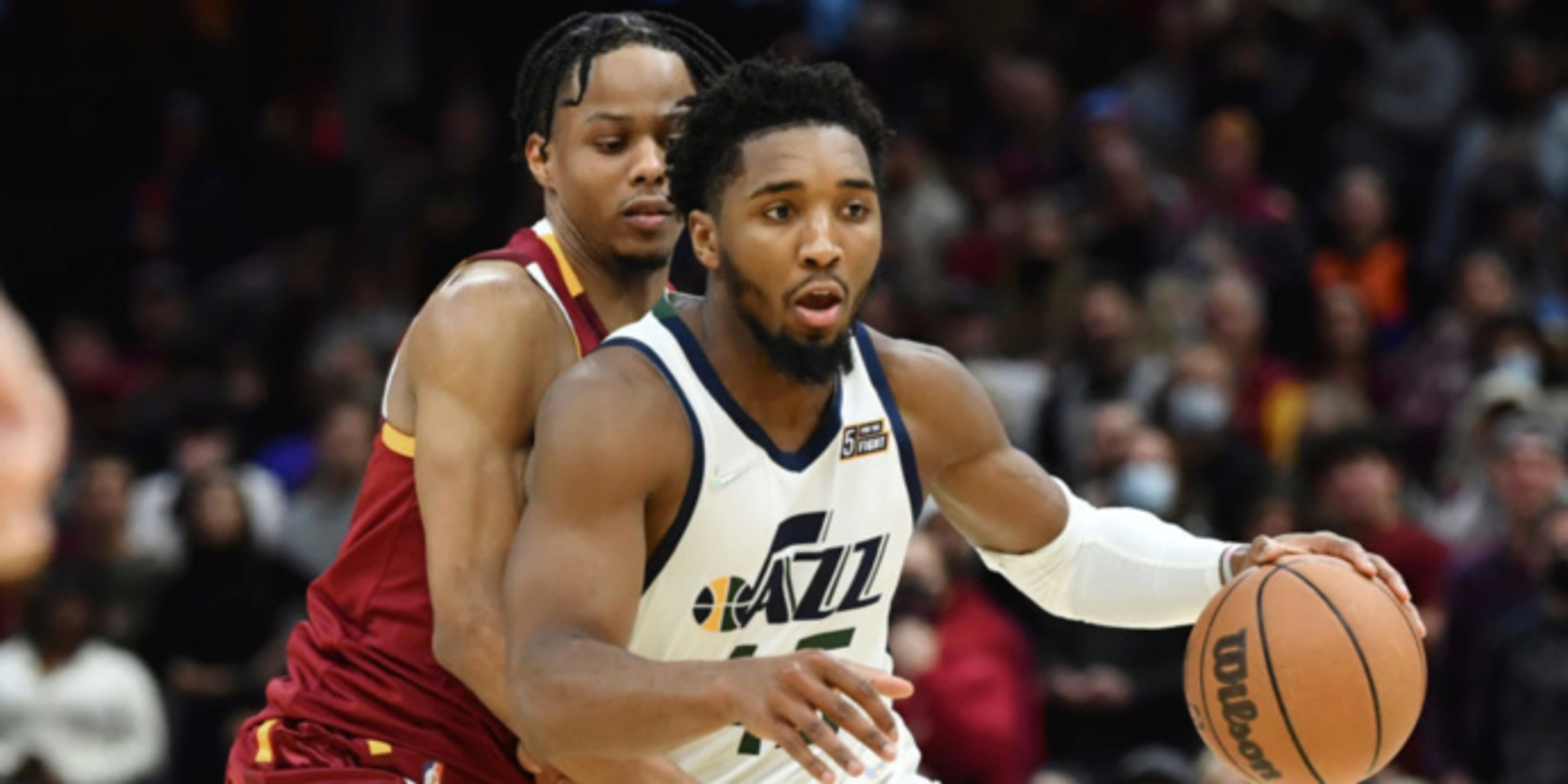 The same two names remain at the top of this week's Basketball News NBA Power Rankings, but there is a bit of a shakeup in the back half of the top-10, as Cleveland and Memphis continue to win.

Stephen Curry couldn't break Ray Allen's all-time three-point record Monday night in Indiana, but the Warriors were able to walk away with a 102-100 victory. Steph has a chance to pass Allen on Tuesday night in the world's most famous arena, Madison Square Garden, against the team that was one spot away from drafting him: the New York Knicks.

The Suns, playing without Deandre Ayton (non-COVID illness) and Devin Booker (left hamstring strain), were beaten badly by the Clippers on Monday night. The Suns still haven't lost consecutive games since before Halloween.

The Jazz, winners of seven consecutive contests — including four straight on the road — possess the league's longest active winning streak. Now, Utah returns home, where the team will commence a string of six straight home games beginning Wednesday. It's longest homestand this season for the Jazz.

Kevin Durant poured in an NBA season-high 51 points in the Nets' victory over the Detroit Pistons on Sunday. The NBA's leading scorer, KD is averaging 32.9 points over his last seven games. But it's also worth noting he is averaging over 40 minutes per game during this current stretch — truly remarkable considering he is just two years removed from a torn Achilles.

Khris Middleton limped to the locker room in the third quarter of Monday's loss to the Boston Celtics and could not return. After the game, Bucks head coach Mike Budenholzer said that Middleton suffered a hyperextended left knee, but stated that "initially there are positive indications" about the injury. However, the team will have a better idea of the severity of the hyperextension after further examination.

The NBA announced Monday that the Chicago Bulls' next two games (Tuesday's matchup with the Pistons and Thursday's game vs. the Toronto Raptors) will be postponed due to the coronavirus outbreak within the locker room. Zach LaVine, DeMar DeRozan, Troy Brown Jr., Coby White, Javonte Green, Matt Thomas, Derrick Jones Jr., Ayo Dosunmu, Alize Johnson and Stanley Johnson are all currently in the league's health and safety protocols. These are the first two games postponed this season. Unfortunately, they may not be last.

Despite seeming to fly under the radar, the Grizzlies are one of the NBA's hottest teams, having won 8 of their last 9 games. This 8-1 surge is especially remarkable when you consider the Grizz are doing it without Ja Morant, who suffered a left knee injury in late November. Plenty of credit goes to Tyus Jones, who has been starting in place of Morant. Over his last seven games, Jones is averaging 11.9 points, 4.3 rebounds, 6.7 assists and 1.7 steals. He has dished out 47 dimes during this stretch while committing just eight turnovers.

Kevin Love scored all 23 of his points in the second half of Monday's win over the Miami Heat to help lead the surging Cavs to their fourth consecutive victory. Remarkably, the Cavs are now five games above .500 without LeBron James on their roster for the first time since December of 2000, when they were 15-10. Yes, incredibly, it's the first time this century!

"You don't get this often."

No lip service when Kevin Love talks about *these* #Cavs. He's saying this team has something "bigger than ourselves" and "truly celebrate each other." @basketbllnews pic.twitter.com/MJIf43fdLW

The Heat started their four-game road trip with a dud Monday night, falling to the Cavs. Miami has three road games left to close out the week, but after playing in Philly on Wednesday, they play the two worst teams in the conference (Orlando on Friday and Detroit on Sunday).

The Clips smashed the Suns on Monday night, despite playing without Paul George (right elbow sprain) and Nicolas Batum (ankle). Marcus Morris Sr. led the way for L.A., racking up 24 points on 10 of 16 shooting and ripping down a season-high 11 rebounds, two triples and one assist. We'll see if PG-13 is cleared to play Wednesday vs. the Jazz.

The Sixers were forced to play without Seth Curry (right shoulder) and center Joel Embiid (rib soreness), and got hammered by the Grizzlies, 126-91. Memphis led by as much as 36 points in the final frame. "This is a burn-it film. Throw it away and move on to the next game," Philly head coach Doc Rivers said after the contest. Philly will look to bounce back Wednesday when they host the Heat.

Good news for the Hornets, as LaMelo Ball, Jalen McDaniels and Mason Plumlee have all been cleared to return from health and safety protocols. The three players have been assigned to the Greensboro Swarm for conditioning purposes. Charlotte's next game is Wednesday vs. the San Antonio Spurs.

The slumping Wizards have lost 5 of their last 6 games. Their only win during this current stretch was against the lowly Pistons in overtime. Washington hasn't won a game in regulation since Dec. 1, and things won't get any easier for the Wiz in the near future. Monday's loss in Denver was the first game of a grueling six-game road trip that includes stops in Utah, Phoenix and Brooklyn.

Over in the NFL, 42-year-old Tom Brady has a chance to become the oldest MVP ever in any pro sport in North America. Not to be outdone, LeBron James — who will celebrate his 37th birthday later this month — is averaging 29.8 points, 8.0 assists, 7.3 rebounds and 2.9 made three-pointers over his last eight games, while logging more than 39 minutes per contest.

Jayson Tatum poured in 42 points Monday in Boston's victory over Milwaukee. Tatum was joined by his fellow Celtic star, Jaylen Brown, who returned to action after missing five games with a right hamstring injury and chipped in 19 points for Boston.

Nikola Jokic was ejected from Monday's win over the Wizards after being hit with two technical fouls, but not before he tallied 28 points, 19 rebounds, 9 assists and 3 steals in 31 minutes. Over Denver's last six games, Jokic is averaging a mind-boggling 28.8 points (on 60% shooting), 13.8 rebounds and 9.7 assists in just 33.3 minutes per contest.

Kristaps Porzingis was dominant in Dallas' victory over the Hornets Monday. Playing without Luka Doncic, who is expected to miss multiple games due to left ankle soreness, KP shouldered the load vs. Charlotte, tallying 24 points, 13 rebounds and 5 blocks. The Mavs host LeBron and the Lakers on Wednesday.

Despite a 41-point, 9-assist performance from Trae Young, the Hawks blew a 19-point second-half lead Monday night in a bitterly disappointing home loss to the Houston Rockets. Atlanta has 4 four of its last 5 games and has lost five straight at home.

After a disappointing and inconsistent start to the season, Chris Boucher is starting to turn it around for Toronto. Over the Raps past four games, Boucher is averaging 14.0 points (while shooting 56.8%) to go along with 6.5 rebounds and 1.0 blocks in just 22 minutes a night.

The Timberwolves welcomed back D'Angelo Russell to the lineup Sunday night in Portland after the point guard had missed three straight games due to a right ankle injury, and ended their five-game losing skid by beating the Portland Trail Blazers. Minnesota travels to Denver on Wednesday and then returns home to take on the Lakers.

Big double-double for Domantas Sabonis in the @Pacers W 💪

Monday, the NBA announced Domantas Sabonis as the Eastern Conference Player of the Week after averaging a team-high 25.0 points (on 75% shooting!) and 10.3 rebounds per game, to go along with 6.0 assists per game, as the Pacers went 3-0.

The Knicks were forced to play Sunday vs. Milwaukee without RJ Barrett and Obi Toppin (who both missed the game because they are in the league's health and safety protocols), and Julius Randle and Evan Fournier combined for just 14 points. Unsurprisingly, the Knicks fell to the defending champs. It was New York's third straight defeat. The silver lining for New York was Quentin Grimes' performance in his first career start. Grimes poured in 27 points and knocked down seven three-pointers, the most ever by a Knicks rookie.

Dejounte Murray recorded his fourth triple-double of the season in Sunday's victory over the Pels. Murray has been playing extremely well over the past month, averaging 18.0 points, 9.0 rebounds, 8.8 assists, and 1.9 steals.

Damian Lillard (lower abdominal tendinopathy) returned to action Sunday night and tallied 24 points, 11 rebounds and 6 assists, but it wasn't enough to get the Blazers back on track. Portland has now lost five games in a row and 8 of their 9 nine. And things don't get any easier for Portland this week, as they host the Suns on Tuesday night and take on the Grizzlies this Wednesday on the back-end of a back-to-back.

After having their seven-game win streak snapped last week, the Rockets got back in the win column Monday in Atlanta. Houston is 8-2 over their last 10 games, which is tied for the best record in the league over that stretch.

The Kings went 0-3 in their recently-completed three-game road trip. Sacramento coach Alvin Gentry told reporters that his players held a closed-door meeting after Monday's embarrassing blowout loss to the Raptors.

Luguentz Dort, who has been one of the bright spots during a disappointing OKC season, sprained his left ankle in Sunday's loss to the Mavericks. Over the Thunder's previous 15 games, Dort was averaging 20.2 points, 4.1 rebounds and 3.1 made treys per contest.

Just when it seemed the Pels' 2021-22 season couldn't get any more depressing, it was reported on Saturday that Zion Williamson "continues to experience soreness in his surgically-repaired right foot and is likely to be shut down from basketball activities for the time being," and that Williamson's bone "has not healed the way the team expected and he will take some time off before proceeding." It appears there is now a possibility that Zion doesn't log a single minute all season.

The Magic lost each of the five games they played on their recently completed five-game road trip, but Cole Anthony refuses to slow down. Over the three games Orlando played last week, Anthony averaged a whopping 25.7 points, 5.3 rebounds, 5.0 assists and 5.0 made three-pointers while shooting 53.6% from downtown.

It was revealed over the weekend that Jerami Grant suffered torn ligaments in his right thumb and will be out indefinitely. However, according to Shams Charania of The Athletic, Grant is "one of the most sought-after players in a potential trade, with the Lakers and Trail Blazers among the teams pursuing the Pistons versatile forward." Shams adds that Grant's injury "is not expected to impact his trade market, as "dozens of teams call the Detroit front office about Grant each week, and sources said the team is open to a possible deal." Our own Evan Sidery looked at possible destinations for Grant on Monday night.