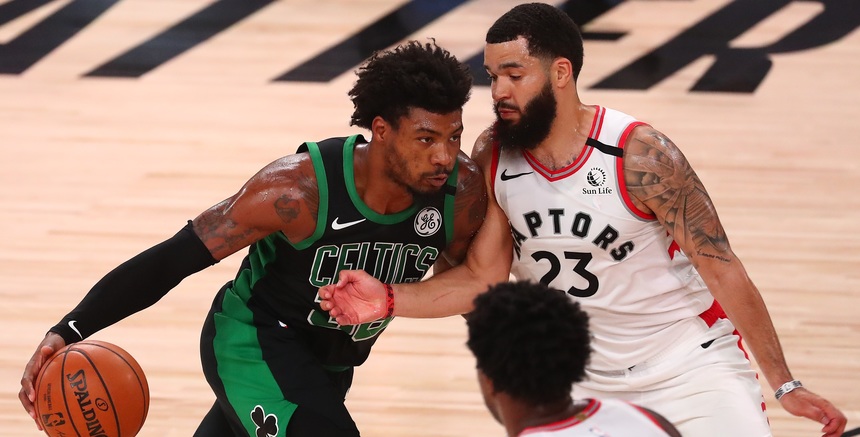 On Friday night, the Boston Celtics defeated the Toronto Raptors in Game 7, 92-87. Now, Boston will advance to the Eastern Conference Finals where they will take on the Miami Heat.

This series was extremely competitive and Game 7 came down to the final minute as well. Check out the top highlights from this outstanding game:

Game 1 between Miami and Boston is on Tuesday night.

It took every bit of seven games, but Jayson Tatum and the Boston Celtics are headed to the Eastern Conference finals.

And they dethroned the NBA champions to get there.

Tatum scored 29 points, Jaylen Brown had 21 and the Celtics topped the Toronto Raptors 92-87 on Friday night in Game 7 of the East semifinal series.

Marcus Smart scored 16 points and Kemba Walker added 14 for third-seeded Boston. The Celtics will face the fifth-seeded Miami Heat in the East finals.

Fred VanVleet scored 20 points for Toronto, which got 16 from Kyle Lowry, 14 from Serge Ibaka, 13 from Pascal Siakam and 11 from Norman Powell. The Raptors were bidding to become the seventh franchise in NBA history to win four consecutive Game 7's.

Boston scored the first seven points of the fourth, taking an eight-point lead. The Celtics never trailed in the final quarter, though it was close all the way to the end.

Powell had a chance to tie it on a drive with just under a minute left, his layup erased by Smart with a block that preserved an 89-87 lead. Lowry fouled out on the next possession, a call the Raptors argued and challenged to no avail. Grant Williams missed both free throws, but Powell fouled Tatum going for the rebound.

Tatum made one of two, the lead was three and all Boston needed was one more stop.

The Celtics got just that; VanVleet was well short on a 3-point try, Kemba Walker sealed it with free throws with 7.9 seconds left, and Toronto’s reign was about to end.

It was exactly one year ago Friday when four Celtics — Walker, Smart, Brown and Tatum — were part of the USA Basketball team in China that fell apart in the fourth quarter of a Basketball World Cup quarterfinal against France, a loss that kept the Americans out of the Final Four of that tournament.

Not this time. Not this year.

Next week, there will be four NBA teams left standing. The Celtics will be one of them.

The chess match started from tip-off.

The Raptors started in a box-and-one on Walker, so the Celtics quickly subbed out Daniel Theis for Robert Williams early to get some more athleticism on the floor — and Boston quickly put together what became a 13-0 run on the way to an early 19-7 edge.

Toronto made the next adjustment, trotting out a lineup to end the first quarter that the Celtics hadn’t seen yet and promptly going on a 10-0 run. The Raptors eventually led by as many as seven; Boston then went on a 15-2 spurt to reclaim the lead and the Celtics ended up taking a 50-46 lead into the break.

The back-and-forth continued in the third. Boston pushed the lead to nine, Toronto scored the next eight, eventually took the lead before the Celtics claimed it back.

Celtics: Boston became the first team in NBA history to win four “road” games in one playoff series. ... Gordon Hayward (sprained right ankle) was on the floor getting shots up before the game. He hasn’t played since Game 1 of the opening-round series against Philadelphia. The Celtics had said he would need four weeks before recovering; Tuesday is the four-week mark.

Raptors: Toronto was eliminated 456 days after winning the preceding season’s title, obviously the longest such run for a team that didn’t win consecutive championships. ... The Raptors are scheduled to fly home Saturday afternoon.

This will be the first time neither the No. 1 nor No. 2 seed in the East will make the conference finals since the NBA went to the 16-team playoff format in 1984; this one will feature No. 3 Boston and No. 5 Miami.

The last time something like this happened in the East was 1969, when No. 4 Boston beat No. 3 New York in what was then the Eastern Division finals.