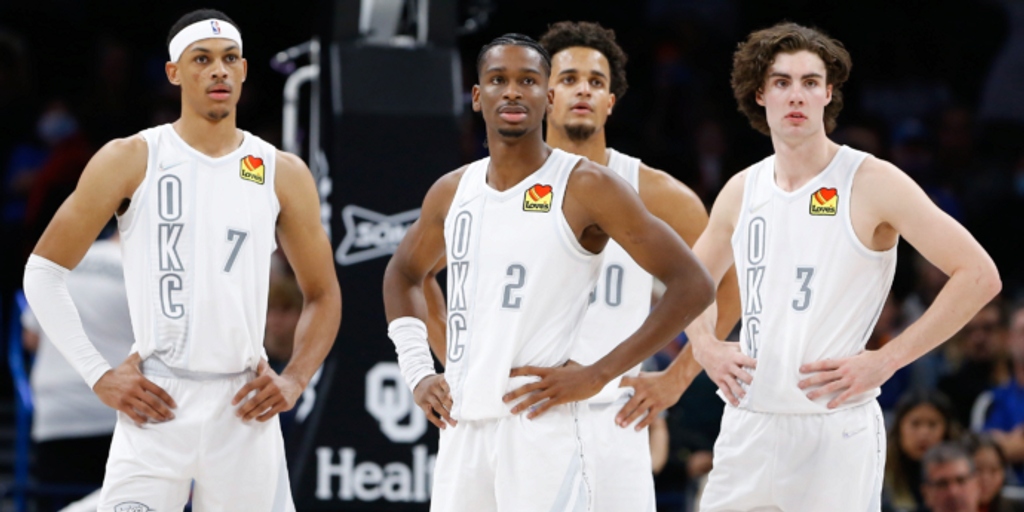 How can the Thunder and Shai Gilgeous-Alexander balance their needs?

Shai Gilgeous-Alexander is not a high-flying leaper like Ja Morant, a ball-handling wizard like Stephen Curry or a court-mapping surgeon like Luka Doncic. Instead, one of the NBA's premier driving threats is somewhere in the middle of his peers.

According to NBA tracking data provided by Second Spectrum, Gilgeous-Alexander led the NBA with 23.9 drives per game last season. It's the highest per-game driving rate in the NBA's player tracking history dating back to 2013-14. If Gilgeous-Alexander met the minimum games played qualifier in 2020-21, he would have led the league again with a whopping 25.2 drives per game.

The 24-year-old does it with an understated blend of sharp angles, long arms, crafty contortion and aerial acrobatics, stymying defenders by creating openings where they don't seem to exist. (Our Nekias Duncan broke down his unorthodox driving game in further detail earlier this spring.)

Gilgeous-Alexander is the lone member of the youth-movement Oklahoma City Thunder to truly arrive at stardom. He put up a career-high 24.5 points, 5.9 assists and 5.0 rebounds per game last season, and popped off after the All-Star break to the tune of 30.4 points, 7.3 assists and 5.8 rebounds (with a 63.4% True Shooting clip) across 13 games. SGA dropped those numbers while shouldering some of the heaviest creation burdens in the entire league.

In short, Gilgeous-Alexander is responsible for generating a ridiculous amount of offense in Oklahoma City. The Thunder had the second-worst Offensive Rating in the league last season, though they wielded a defense that looked promising at times. OKC's 43.5% Effective Field Goal percentage on "assisted" shots (taking less than two seconds to shoot) was dead last, per PBP Stats.

SGA has one of the lowest potential-assist conversion rates across the NBA. Theoretically, this could stem from several causes. Maybe Gilgeous-Alexander is throwing tons of bad passes, or his pass selection involves more difficult shot locations, or his teammates are poor collective shooters, or, it's simply bad luck. I lean toward the latter two given OKC's team-wide struggles.

At age 24, Gilgeous-Alexander is still in the growth phase of his pro career, but also notably older, more experienced and more proven than most of his teammates. The Thunder (most likely) aren't flipping the switch to "win now" quite yet, and should be content to let the young guys ride through mistakes as the draft picks continue to flow in.

But what does that mean for Gilgeous-Alexander and his development? We just saw the San Antonio Spurs trade Dejounte Murray, another talented breakout star guard leading a prospect-laden squad, to the Atlanta Hawks. Is Gilgeous-Alexander destined for a similar exit?

I don't think so. However, both the player and the team must strike a balance to foster everyone's growth.

Gilgeous-Alexander is a phenomenal catch-and-shoot player, having cleared 41% on catch-and-shoot threes each year in Oklahoma City. Yet, his volume — already pretty low — dipped to under one attempt per game last season.

We never got to see Giddey hit a spring stride; he missed every game after Feb. 24 due to a hip injury. Giddey landed on the All-Rookie Second Team last season, but still took the classic rookie point guard lumps.

Giddey ranked 10th among all players with 1.6 bad-pass turnovers per game (per PBP Stats), and his 17.3% overall turnover rate was third among all players who logged at least 800 minutes (per Cleaning the Glass). He also shot 44.1% on drives to the basket, the fourth-lowest among 61 players who averaged eight or more drives per game.

The Aussie point guard relies on his court vision, size and semi-natural touch to find driving lanes and make shots. He doesn't have a quick first step, upper-body strength or contortion ability to make many off-balance shots at this stage. When Giddey doesn't get that initial blow-by, he struggles at times to create another lane for himself with a defender in front of him. That should change in due time, and, before his injury, Giddey did show some increased aggression and a willingness to play through contact.

Giddey also functioned well driving off the catch, where he should continue to play frequently as Gilgeous-Alexander dominates the ball. The 19-year-old's off-ball awareness lines up with his on-ball vision, and he also attacks quickly and can keep defenders from regaining their footing after a closeout.

If SGA can use his gravity to open up these types of changes for Giddey, the latter will find easier chances for himself and, thus, pull some of the focus away from SGA. Of course, I glossed entirely over Giddey's passing as well, which will keep defenses on their toes as long as he's playing basketball.

Jackson Frank brilliantly dissected Tre Mann's game towards the end of last season. His piece covers the necessary growth steps for Mann to become a consistent pull-up scorer and passer. I'll let Jackson's piece speak for itself, but here's an observation he made that applies in this context:

For many scoring-inclined prospects or young guys, a hurdle that often exists is the inability to create open or comfortable looks when transitioning from their pre-NBA context to the league. Whether it’s athletic shortcomings, atypical shooting mechanics or something else, the capacity to consistently find clean shots prevents them from burgeoning into high-level scorers.

With Mann, that’s not a problem because he’s routinely producing open, replicable shots for himself. He’s not hitting a ton of them thus far, but the process is encouraging. Shot-making is a staple of developmental curves, even if it’s usually just implied rather than stated analysis. He views offensive decision-making through a lens of distinguished creativity."

Mann might be the only player like this currently on the Thunder roster — aside from maybe SGA himself. I'm excited to watch Tre's development next season.

Luguentz Dort and rookie lottery pick Jalen Williams should get in on some of the self-creation action next season, and maybe we'll see a bit from Aleksej Pokusevski, Chet Holmgren and Ousmane Dieng. However, Giddey and Mann are the primary drivers (literally and metaphorically) behind Gilgeous-Alexander and will lead the support.

Gilgeous-Alexander will still carry a sky-high usage rate though. To maximize his effectiveness as a playmaker, others need to step up and hit shots they simply did not make last season.

According to the NBA's tracking data, nearly 52% of SGA's passes last season went to four players: Giddey, Dort, Darius Bazley and Jeremiah Robinson-Earl. Bazley was the only one of the four to shoot over 37% from the field on those passes. None of them cleared 30% from beyond the arc.

As a team, Oklahoma City converted a paltry 32.6% of its catch-and-shoot threes, by far the worst mark in the NBA. The Thunder attempted the most "wide open" threes (no defender within 6 feet) of any NBA team last season and shot the second-worst clip in the league at 35.1%. And on top of that, they were also dead last in efficiency within 5 feet from the basket (58.3%). Yuck.

Giddey and Dort quite simply must improve as off-ball shooters. For Giddey, adding a viable catch-and-shoot three-ball will only make things easier for him when he attacks a closeout; right now, defenses can relax when he's spacing the floor. Dort, meanwhile, launched 7.7 triples per game last season, but converted only 33.2% of them.

Robinson-Earl is an interesting case. Barely a stretch forward at Villanova, he took 47.0% of his shots from behind the arc as a second-round rookie. Robinson-Earl made 35.2% of his threes, which is pretty solid at this stage and a very positive launch pad for his future.

Bazley has not arrived as a consistent shot-maker since going No. 23 overall in the 2019 NBA Draft. He brings value on the defensive end, but has poor shooting splits no matter the context. About 44% of Bazley's shots came at the rim (83rd percentile, per Cleaning the Glass), but he made them at just a 58% rate (20th percentile).

And now, in addition to that quartet, OKC has three new lottery picks to add to the mix. Holmgren and Williams, in particular, could help space the floor right away.

Holmgren balled out at his two Summer League showcases in Salt Lake City and Las Vegas. We saw a bit of him in pick-and-pop-type actions, and he seemed undeterred in freeing himself from the screen defender and setting himself quickly to shoot. Holmgren has been an elite perimeter shooter and rim-finisher since high school; expect that to translate very quickly to the NBA. Imagine defenses having to constantly monitor Holmgren's space on the court when he's also in an action with Gilgeous-Alexander.

Williams has been billed for his versatility as a playmaking option, and he also spaced the floor well at Santa Clara. The 6-foot-6 wing made 20 of 41 catch-and-shoot looks as a junior, per InStat Scouting. He knows how to subtly shift into passing lanes and confidently rise up with consistency. Even before discussing Williams' on-ball skills, he at least has a stable floor as a relocating wing who can be another outlet for SGA, Giddey, Mann and others.

Of course, Williams and Holmgren are still only rookies, and they won't be surefire successes in just one year. This circles back to the broader challenge for OKC: How do you continue the youth movement (not using the T-word yet) with a scoring guard capable of putting up an All-Star season in 2022-23?

This is where Gilgeous-Alexander must simply trust the process. He assuredly has room to improve on the defensive end, and his pull-up efficiency dropped off last season after stellar numbers in 2020-21. SGA is talented enough to take over possessions and get his own buckets, but that isn't always in the best interest of the team's development. He'll have to be patient and continue being a supportive teammate as the others catch up.

The 2022-23 Thunder season will ultimately be a trust exercise between one star and one organization. Oklahoma City is putting the pieces around Shai Gilgeous-Alexander that he needs to ultimately thrive. We'll see how much time it takes for the rotation to finally coalesce.