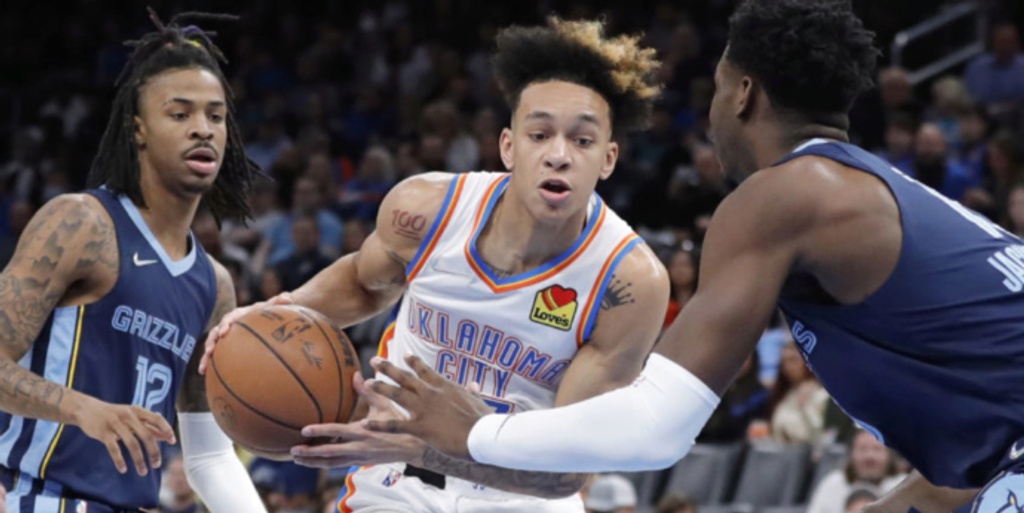 During any rebuild, the general theme should often be structural experimentation. Provide young players a role, while empowering them to experiment within that role. Establish expectations for how they can thrive, but don’t be overly rigid or domineering in the exact play-style or execution. Freedom, within reason, is the slogan.

For Oklahoma City Thunder guard Tre Mann, all of that is an apt, broad synopsis of his rookie season. He’s started 19 of the past 20 games and all year, he’s enjoyed a role encouraging him to entertain a whole bunch of ideas. Many aren’t currently prosperous, but a future where they are isn’t too difficult to identify.

Right now, Mann isn’t a very good NBA player, yet much of what he’s showcasing hints at a not-too-distant reality where he is quite good. Most rookies aren’t good. His struggles are palatable because the kernels of intrigue continue to swell.

Dating back years, Mann’s adroit ball-handling talents have popped off the screen. Through five months in the NBA, those handling chops have probably been his most functional skill. The entire kitchen sink of tricks is seemingly in his arsenal — hesitations, crossovers, in-and-outs, snatch-back dribbles — and he leverages all of them to forge advantages.

Lower-body flexibility and evasive deceleration amplify the threat of his ball-handling to keep defenders off-kilter. As the season’s progressed, he’s growing more decisive and self-assured in these moves — less thinking ahead of every decision and more acting on the fly as he sees fit. He’s already authored a smattering of highlight-reel buckets, and it’s not complicated to see him torching defenses like this for years:

The ball-handling, flexibility and deceleration are all critical in his ability to compensate for lackluster burst and strength. According to Cleaning The Glass, just 19% of his shots occur at the rim (31st percentile), where he’s shooting 49% (19th percentile). He’s not unwilling to play through contact or embrace physicality, but his poor core strength gives rim protectors the clear edge and invites on-ball defenders to disrupt or crowd his handle.

Addressing that physical deficiency could be incredibly beneficial, helping him to fend off handsy assignments and emerge from the cellar of finishing and rim pressure groupings. Fortunately, dribble-drive prowess isn’t the bedrock of Mann’s scoring allure. His shooting profile is quite encouraging, even if immediate results don’t highlight that.

He’s connecting on 37% of his spot-up threes and looks reasonably adept as a movement shooter, given his footwork and balance. Leaning into that catch-and-shoot volume is important. He’s prone to bypassing stationary triples in favor of drives, but interior scoring is fairly tricky these days (41% on twos).

In fact, he’s taken more pull-up threes than catch-and-shoot threes this season, despite generally playing alongside a lead creator. Letting it fly off the catch more often would be a boon to his efficiency and Oklahoma City’s offense.

None of this is to suggest off-the-bounce stuff is forbidden with him. Mann’s pull-up game is rather promising. Among 14 rookies to attempt at least 100 pull-up jumpers this season, his 47.1% effective field goal percentage ranks second behind Cam Thomas (48%).

His step-back three is swiftly developing into a reliable, hallmark weapon and he’s shooting 36.8% (21-of-57) on it this season. The space he generates, while maintaining balance, is absolutely menacing. His ankles can endure some serious torque.

For many scoring-inclined prospects or young guys, a hurdle that often exists is the inability to create open or comfortable looks when transitioning from their pre-NBA context to the league. Whether it’s athletic shortcomings, atypical shooting mechanics or something else, the capacity to consistently find clean shots prevents them from burgeoning into high-level scorers.

With Mann, that’s not a problem because he’s routinely producing open, replicable shots for himself. He’s not hitting a ton of them thus far, but the process is encouraging. Shot-making is a staple of developmental curves, even if it’s usually just implied rather than stated analysis. He views offensive decision-making through a lens of distinguished creativity.

If there’s open space to occupy, he touts the ingenuity, handling and flexibility to inhabit it. A lot of what he sees and how he moves feels inherent as opposed to acquired.

A trap that can be the mystique of pull-up shooting is the absence of ancillary skills around it. If you’re a good pull-up shooter but underwhelming in an assortment of other skills like passing and advantage creation, demanding significant usage to broadcast the impact of that shooting is much more onerous.

Mann has the advantage creation with his slippery handle and is a much better passer than his assist rate indicates. His best passing trait is reads to the interior, but Oklahoma City’s crop of big men are not credible play-finishers. I’d be curious to see what his inside-out passing looks like on a team with better shooting, though that’s also an area for improvement.

Yet given his dexterity, innovation as a dribbler and the manner in which he interacts with space, he might have some latent playmaking upside that would broaden the domain of his passing toolbelt. And regardless, it’s not as though he’s totally inept. He’s exhibited an enticing knack to thread reads into small windows and occasionally manipulate help defenders with his eyes or body angles. The base in Year 1 is substantial.

His ideas are also ahead of his execution. He’ll see an opening, but not really have a path to capitalize on it. As the scope of that issue dwindles and he potentially adds core strength to better navigate physicality, he should be excellent at weaving through defenders and delivering dimes.

All of this is to say that I’m not really worried about him being a unitasker offensively who almost exclusively derives value from pull-ups and fails to contribute elsewhere. He’s going to manufacture paint touches and be a tenable facilitator. Offenses should be able to entrust him with sizable usage.

Don’t let the gloom of Mann’s numbers today cast long-term doubt or concern. The outline of a versatile, impactful secondary creator is surfacing. In due time, refinement will come and the entirety of his services will blossom. Foretelling it merely requires a look beyond the box score.