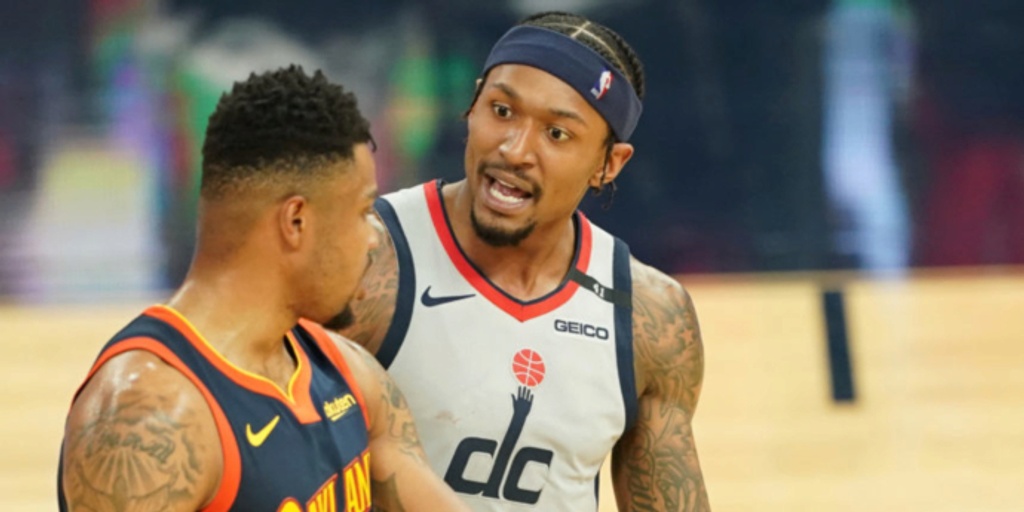 With the slightest stirring of the pot by answering a question about his teammate Stephen Curry's chances to win the scoring title, Kent Bazemore opened Pandora's box.

"49 points in 29 minutes, that's unreal," Bazemore said prior to the Golden State Warriors' win Monday night over the Utah Jazz. "And we've got guys hurting hamstrings trying to keep up...y'all gotta do some research on that (laughs)."

For those who are confused: pic.twitter.com/ND6SQUnftd

The comment was a surefire, indirectly-direct shot at Washington Wizards superstar scoring dynamo Bradley Beal, who at the expense of scoring 50 points in a win at Indiana, strained his hamstring and will have missed at least two games as a result of the injury.

Sidelined by the setback and not amused by Bazemore's playful jab, Beal responded loudly on Twitter.

It started at 10 p.m. ET, with a direct mention of Bazemore's handle: "I don't do the subliminals !!!!!!!" A half-hour later, you could feel the annoyance the All-Star had with Golden State's swingman.

"You don’t know me or s*** about me bruh!!! You don’t know why I go out there and play and it damn sure ain’t for another man’s approval!!! You a straight LAME!!! But it don’t surprise me coming from you, thats what’s yo type do!!

"It’s funny you say that because ya mans admittedly checked my numbers before the game, but IM CHASING!!! Shut yo ass up!"

I stay in my lane!! Focus on BRAD. Idc what another man doing in this league. I’m concerned about me and MY GUYS over here!! Keep that goofy shit over there @24Bazemore !!

Of course, if you come at Beal in any way, shape or form, his wife, Kamiah Adams-Beal, won't hold back from sharing her thoughts.

While Beal and Kamiah were destroying him on Twitter, Bazemore was on the court for the Warriors.

When the 31-year-old caught wind of what had gone on as he was away from his phone, a chuckling, head-shaking Bazemore retorted in his own defense, pointing to his backing of Curry.

"I guess you can't joke anymore, but whatever" Bazemore said. "I don't know man. I feel like I'm a pretty lighthearted guy. I stay in my own lane. I don't say things to ruffle feathers, but hey man, if you want to know where my loyalty is, it's to SC-30. I mean, anybody out there chasing him, it's going to be tough.

"Whatever, it kinda got out of hand. I didn't check my phone all day until after the game, so...it's kinda blowing up. But I don't get involved in that crap, man. I'm gonna go home, love my wife, watch some 'Peaky Blinders' and go to bed. I got work to do [Tuesday]."

“I guess you can’t joke anymore. … If you want to know where my loyalty is, it’s to SC30. Anyone out there chasing him, it’s gonna be tough.” pic.twitter.com/OClNVkAwwL

Probed further if he would reach out to Beal to clarify his words, Bazemore said there's nothing to explain.

"I was laughingly, jokingly, half-heartedly [saying] it," Bazemore stated with flailing arms in disbelief. "I said I hope he does it [chasing Curry]. [Beal] is already out, and I didn't wish anything bad on him. It's just a comment.

"It's the kind of world we're living in right now -- a little bit sensitive, little sore-palmy out. Whatever man, roll with the punches, keep your head down, keep going. It'll pass, probably [Tuesday] when I wake up, and everything will be the same. I ain't got time for all that Twitter trash."

It doesn't appear that the issue has died down amongst NBA social media circles, though. It may just be gaining traction.

Beal appeared this morning on ESPN's First Take to address the matter publicly.

"I didn't like that. I didn't like that last part of the comment," Beal said Tuesday morning of Bazemore. "The first half about what Steph was doing, I'm with you. 49 [points] in 29 minutes...I think everybody in here can agree that's remarkable and truly amazing, so nobody's arguing that. But I didn't mention you. My hamstrings have nothing to do with why I go out there and play the game.

Bradley Beal is not a fan of Kent Bazemore taking a shot at his hamstring injury.

"For me to injure my hamstring and then you kind of make a joke about it, I don't take that too fondly. … Just keep your situation over there. … Don’t make fun of something that’s not funny." pic.twitter.com/XispTfAnpL

"For me to injure my hamstring and then you kind of make a joke about it, I don't take that too fondly, honestly...[In] my first four years, I was always labeled an injury-prone guy. I was always labeled as somebody who couldn't stay on the floor. So I take pride in my body, I take pride in being on the floor and being available for my team and giving my team the best chance to win. My main focus is getting us to the playoffs, and that's all I'm focused on. That's was all. I was just trying to get my point across [with the tweets]: Just keep your situation over there, let's just keep it [about] hoops. Don’t make fun of something that’s not funny."

Beal currently trails Curry by a half-point in the scoring race. Here's to him getting healthy sooner than later and being able to make a final push to do it.