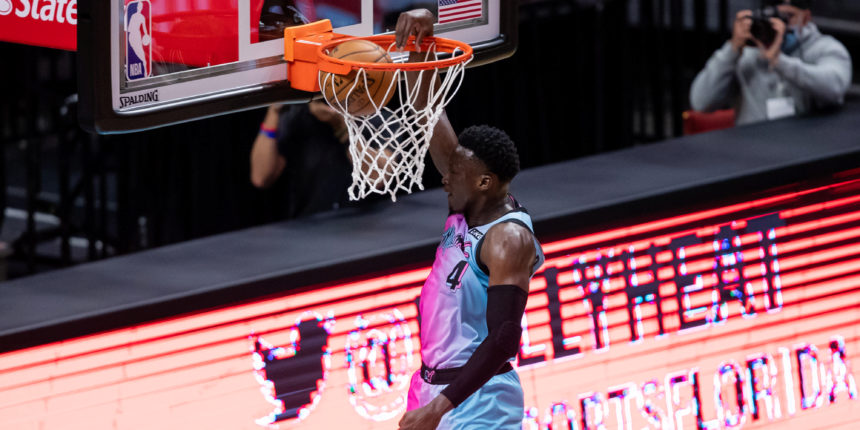 At last, Oladipo finally gets his chance to play with Heat

Victor Oladipo got swept out of the first round of the playoffs last season by Miami, and when that series concluded he had no doubt the Heat would end up in the NBA Finals.

And now, he’s got a chance to help them make this season’s playoff push.

Oladipo has been an offseason Miami resident, and now, he’s finally an in-season one as well. He started in his Heat debut Thursday night, helping Miami get over the .500 mark with a 116-109 win over the Golden State Warriors.

“He’s a veteran guy, he’s played in good programs on good teams, so he knows how to fit in,” Heat coach Erik Spoelstra said. “I think defensively, it’s extremely natural, the fit. And offensively, he gives us that downhill attack, another guy that can make plays, another guy that can put pressure on opposing defenses in the paint.”

It’s a fit that has been a long time coming.

Oladipo is close with Miami legend Dwayne Wade — Oladipo played at Indiana for Tom Crean, Wade’s coach at Marquette — and that’s just one of many hints that this pairing was inevitable. Oladipo trains in Miami, his name somehow always seems to get linked to the Heat in trade or free-agent talks, and above all else he sees himself as a fit for the Heat.

The buzzword they use in Miami is “culture.” Spoelstra often says it’s not for everybody. Oladipo has craved being a part of it.

“I come from high-cultural basketball: DeMatha Catholic High School, to Indiana University, and now being on the Heat,” Oladipo said. “It’s a culture. It’s a way of life and it’s playing for something bigger than yourself. It’s sacrifice, it’s winning at the ultimate level. That’s what I’m used to. That’s what I flourish in.

That, and he’s already had a taste of that culture from the workouts he used to share with Wade. The three-time NBA champion with the Heat thought nothing of sharing secrets and advice with Oladipo, who soaked up every word.

Oladipo came to Miami at the trade deadline last week, the Heat adding him — a two-time All-Star, a 21-point-per-game scorer this season and someone only three years removed from All-NBA status — from Houston in exchange for Kelly Olynyk, Avery Bradley and a pick swap in 2022.

“It gives them another presence defensively, gives them another scoring option,” Golden State guard Stephen Curry said. “It’s a good pickup for a good team. Obviously, they’re the defending Eastern Conference champs and they got better and I’m sure he’ll enjoy his time here playing with the guys he gets to play with.”

Oladipo didn’t enjoy playing against them last year, when he and the Indiana Pacers endured that first-round sweep.

But even then, he knew the potential. And now that he’s in Miami, he’s eager to see if another deep Heat postseason run can happen.

“I felt how they clicked, what they were doing out there, I felt it,” Oladipo said. “I felt something special there. So, to be a part of this group now, it’s truly a blessing.”

James Harden (hamstring) suffers setback, could be out until playoffs
8h