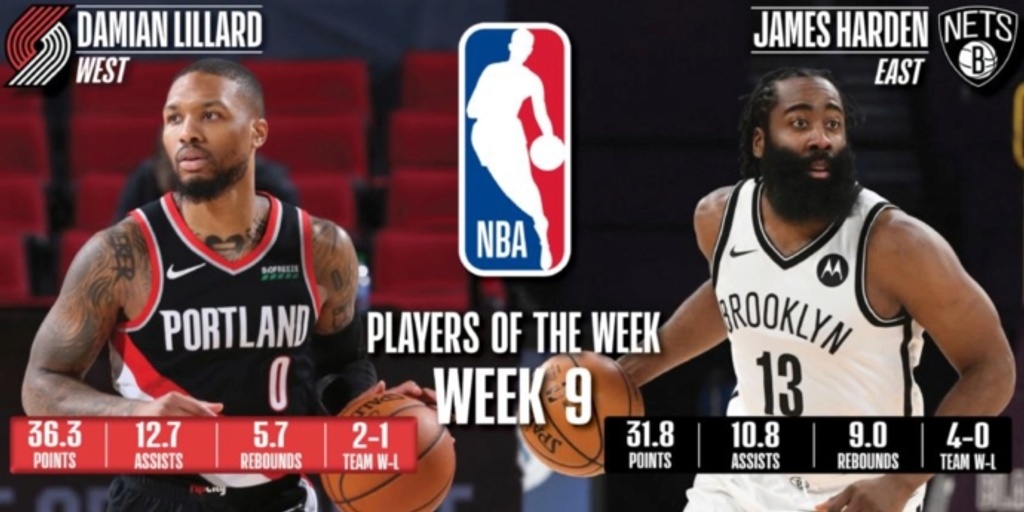 The NBA announced its Player of the Week recipients for the week of Feb. 15 through Feb. 21 on Monday afternoon, and the winners are household names.

Damian Lillard took home Western Conference honors for the 11th time in his career, a Portland Trail Blazers franchise record according to team reporter Casey Holdahl. Rumblings of MVP talk have been stirring about as Lillard continues to put the Blazers on his back in high-stake moments, leading the team as his right-hand man CJ McCollum and starting center Jusuf Nurkic are on the mend.

The All-Star guard shoo-in averaged 36.3 points, 12.7 assists and 5.7 rebounds over his last three games. Despite Portland's six-game winning streak being snapped at the hands of the now-streaking Washington Wizards on Saturday, the team is in fifth place in the West.

Since delegating each other's roles, the Brooklyn Nets have been on a tear, which has resulted in James Harden representing the Eastern Conference's award this week. The Beard has developed chemistry quickly with de facto shooting guard Kyrie Irving, and the production is loud and furious. Harden put up 31.8 points, 10.8 assists and 9 rebounds per game over his last four, all of which were wins.

Perhaps the scariest part about that stretch is that Brooklyn swept a rigorous West Coast road trip in the process of its own dominance, taking out the likes of top teams such as the Phoenix Suns, Los Angeles Lakers and LA Clippers in the process...all without Kevin Durant in tow.