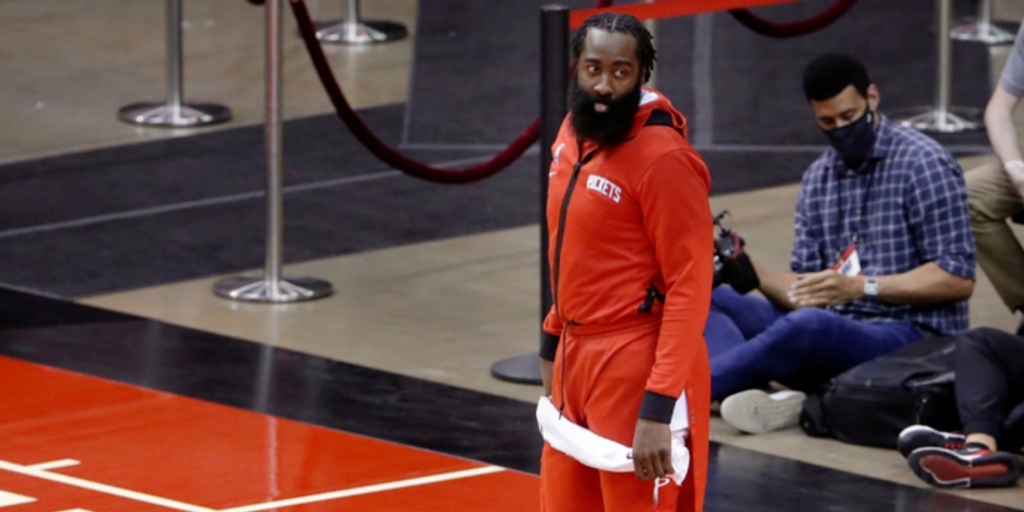 With just a few days of practice and one preseason game under his belt this year, James Harden is in "catch-up mode."

The Beard finally broke his silence on Wednesday, speaking briefly on a number of topics everybody has been curious about since reportedly requesting a trade out of Houston.

Reporters attempted to ask the former NBA MVP about his displeasure with the Rockets. He didn't budge. When questioned of his travels to Las Vegas and Atlanta while training camp was going on in Houston, Harden said he was working with his personal trainers to prepare for the upcoming season.

Since arriving to camp on Dec. 8 and having actually begun participating Monday, Harden has really noticed the changes all around the team. There's a new head coach in Stephen Silas, somebody who the All-Star guard believes has done a good job of communicating to put the structure of the team together. The two haven't gotten the chance to sit down with one another yet for a real one-on-one talk, and the same goes for new Rockets general manager Rafael Stone.

"We haven't had a conversation," Harden blankly stated when asked if he had trust with Stone like he did with previous executive Daryl Morey.

On a positive note, Harden was just happy to play in a game setting for the first time since the Bubble. He made his preseason debut against the San Antonio Spurs, scoring 12 points and diming out four assists.

"I hadn't really had an opportunity to play 5-on-5," Harden said. "Individual workouts, weightlifting, individual basketball training is great. But as every NBA player can agree, there's nothing like 5-on-5 training and the physicality and making reads and things like that. So yesterday for my first time being out there, I felt good and it was exciting.

"As far as principles and things offensively, defensively that Coach Silas has implemented already, I'm kinda behind a little bit -- which it isn't extremely hard for me, but I'm still behind. So I gotta catch up in the sense of that. But just going out there playing basketball and getting a feel for the game is easy."

He can feel John Wall and DeMarcus Cousins' passion and motivation for their respective new opportunities. He sees the excitement. It showed last night.

As for his own business, Harden hasn't gotten the sense of being a distraction to the team since he reported to Houston for camp.

"it's nothing that's been said about it. Everybody in the locker room, coaching staff have been focused on ramping up and preparing for the season. That's all that matters.

"...Today was good. Yesterday felt really good being out there...I can only focus on right now, and for me, the best James Harden is making sure I'm in shape."