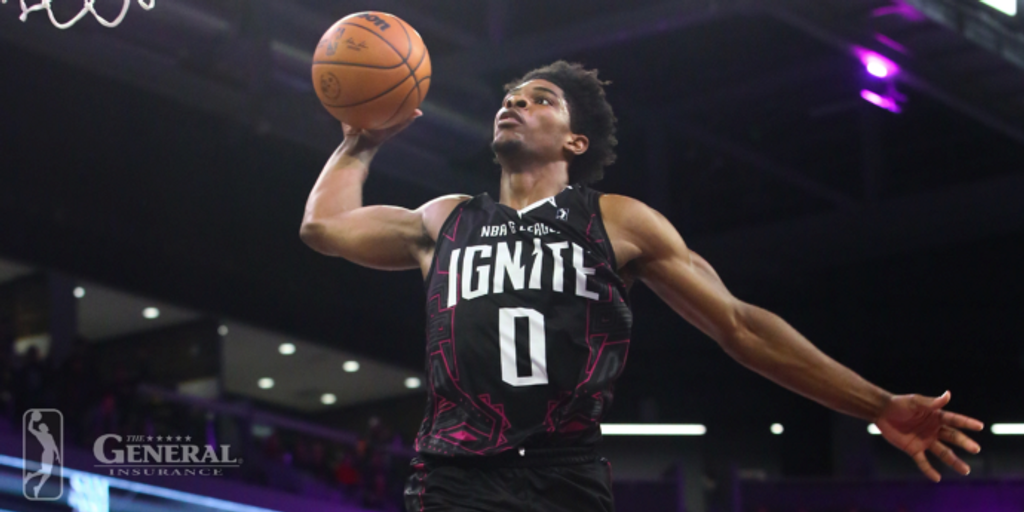 In recent years, the NBA G League has grown in popularity. Teams are utilizing the benefits it provides, players are taking advantage of the opportunity it presents and fans are tuning in to see talents who will eventually be gracing the big stage in the Association.

Due to the increasing demand of more coverage around the league itself and the top-prospect-laden Ignite program, the G League has aligned with The General Insurance to produce an eight-part docuseries called "The Break."

Two shows in since premiering last month, "The Break" will drop new episodes roughly every three weeks and conclude in April. The project features rising Ignite star Scoot Henderson, 2020-21 G League Rookie of the Year Mac McClung and longtime veteran and two-time NBA champion Norris Cole. In these episodes, you're taken both behind the scenes and on the court with exclusive footage that illustrates these players'  respective paths to the NBA.

To learn more about the series, the process behind it and more, Basketball News discussed "The Break" with G League Head of Partnerships George Wilson.

The amount of attention that was on Scoot Henderson and Victor Wembanyama this fall before the season began was historic. Was that the basis for the idea to start the show? If not, what was?

George Wilson: "We decided to create this docuseries with The General so we could bring our fans closer to the game by following our players as they strive to realize their goal of making it to the NBA.

"But, the attention surrounding Scoot and Victor — the presumptive top two picks in the 2023 NBA Draft — is certainly undeniable, and they served as the perfect starting point for this series in the first episode. Beyond Scoot and Victor, the basis in developing this series was to foster deeper connections between our fans and the players around the league. The G League is filled with incredible talent, improving year after year, with almost half of NBA players on opening night rosters having played in the G League. So we are glad this docuseries could further shine a light on their journeys."

Could you give some background as to why you chose Scoot Henderson, Mac McClung and Norris Cole to be featured on the show throughout the eight-part series in particular?

Wilson: "Scoot, Mac and Norris are all playing in the G League, but each is on a different path to the next level in the NBA. They really represent the diversity in the league, and that it is a place for players at different stages of their careers to achieve their dreams. Whether it’s through a likely top pick in the 2023 NBA Draft in Scoot Henderson, the 2021-22 Kia NBA G League Rookie of the Year in Mac McClung or a two-time NBA Champion in Norris Cole, we sought to effectively showcase that this league doesn’t have one linear path. The NBA G League is filled with hundreds of players who have such compelling stories, all looking to achieve a common goal, and we’re glad our fans can be a part of their journeys through this docuseries."

What were each of those three players' reactions when you told them they'd be a part of this series? Was there any input on their end idea-wise?

Wilson: "The players were very excited to be featured in the series and bring our fans along the way throughout the season. They have input throughout, from start to finish. Before each episode, we work with them as they offer any suggestions. For example, earlier this season, Mac’s family came to a game and nearly 30 of his family members and friends wore “Mac” T-shirts in the crowd, so when Mac gave us a heads up, we wanted to be sure to capture that as part of the episode. Our job in collaboration with the team at Blue Cup Productions is to ensure that we’re authentic in the way in which we feature our players and personalities. So their input and ideas are critical to this project’s overall success."

Why is it important for the G League to share the inside track to these players/teams off the court?

Wilson: "We continue to hear from our fans that they are seeking increased access to our players and teams. This docuseries allows us to meet our fans where they are, offering them continued compelling content to engage with our league and players. A player’s path through the G League can often be overlooked, so it was important through our collaboration with The General to showcase these players’ incredible journeys and the amount of work they put in throughout the season to achieve their goals. The league and its players also continue to garner added attention each season, so we are glad this docuseries met the demand we saw from our fans in wanting increased content."

To that point, do you feel like this docuseries will help illustrate the G League's growing popularity? Also, why do you think so many people have taken notice of it in these recent seasons?

Wilson: "Our hope is that the docuseries showcases the league’s growing popularity and the tremendous talent filled in this league. The G League’s growth, particularly over the past few years, has truly been remarkable. As mentioned, nearly half of the players on NBA opening night rosters played in the G League. Ten years ago, that percentage sat at roughly 19%. That also extends to coaches, with six NBA head coaches having spent time on G League benches, and more than 75 NBA assistant coaches were assistant or head coaches in the G League.

"The G League has also helped the NBA infrastructure grow, and we have always been an effective testing ground for NBA rules and procedures. The Coach’s Challenge and the 14-second reset on offensive rebounds were initially used in our league and are now a staple of every NBA game. This past week, we employed Final Target Scores at the 2022 AT&T NBA G League Winter Showcase, and the data from those finishes is extremely valuable in helping potentially enhance the game experience for fans and players. We’ve also been using Final Target Scores throughout the regular season, as every G League game that goes into overtime ends on a target score.

"Certainly, we’ve seen a significant amount of attention recently surrounding our NBA G League Ignite team with the number of talented players from that team now in the NBA. Additionally, the Capitanes’ first season in Mexico City marks an important milestone for the G League and the NBA in our ongoing commitment to growing the game across Latin America.

"We’re looking forward to ongoing momentum throughout the rest of the season and beyond, with additional players landing on NBA rosters, and our league continuing to serve as a hub for innovation."

Why did partnering with The General make sense for this particular project?

Wilson: "The General was a perfect fit and collaborator for this project, with its brand positioning focused on serving as an empathetic and flexible insurance company that is committed to putting its customers first and giving them a break when they need it most. This docuseries spotlights the players in the G League who are working for the break they deserve, which aligns with the series title – 'The Break presented by The General.'  From the beginning of our marketing partnership, The General has been passionate about spotlighting the athletes who push themselves to succeed, and we are proud to help bring that to life, helping provide our players with the attention they deserve through this docuseries."

What is the process like in putting together the episodes and the length of the editing process?

Wilson: "The filming and editing process is a very lengthy and detailed one, considering the amount of footage we capture. The audio producer for this series also creates custom music and sound for each episode to set the mood for each scene, almost creating more of a movie-like atmosphere. There’s an incredible amount of detail and care behind each frame of each episode, which is a credit to our talented team — in particular the director in Taylor Sharp, the editor and shooter in Holland Gallagher, as well as the audio producer in Russell Perna."

Looking ahead, what is your goal for this project? Is this a series you could see coming back next season?

Wilson: "We are looking forward to continuing to engage our fans with this docuseries and the additional episodes that will run through April. The fan response and engagement thus far has truly been incredible and we are excited for what we have planned for the rest of the season, and from there, we’ll see what’s in store for ahead."