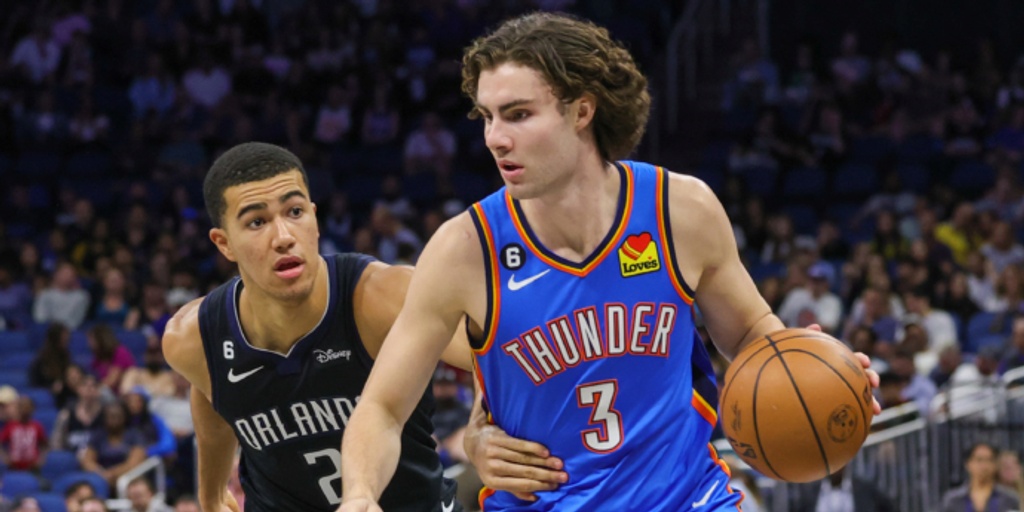 We should be paying attention to what's happening in Oklahoma City.

I mean beyond the "they own 4,837 picks over the next five years" jokes. A little deeper than the "Shai Gilgeous-Alexander has been a top-12 player this year" take, though it's certainly worth pointing out the fifth-year guard is averaging 31-5-6 on wild efficiency (61.4 TS) and improved defense.

Whether you're looking at NBA.com or Cleaning The Glass (they filter out garbage time), the Thunder are, once again, mere tenths-of-a-point away from laying claim to a top-10 defense — without a true rim protector.

The offense, while underwhelming statistically (21st in ORTG), has real structure despite a general lack of shooting. It's not easy to generate quality looks with only one rotation player shooting above league-average from three (35.7%) on at least three attempts (Isaiah Joe, 44.4% on 3.9 attempts).

We've crossed over into a new calendar year, and the Thunder are only two games outside of the final play-in spot. There are good things happening here.

On the topic of good things happening, it's worth noting the growth we're seeing from Josh Giddey.

He showcased the outlines of an interesting-yet-flawed player last season. A 6-foot-8 playmaking wing who may already be a top-six skip passer in the league — and undoubtedly one of the best inbound passers we've had come through in a minute, as niche as that sounds — with limited burst and a shaky jumper to boot.

(A fun fact on the skip pass front: per Second Spectrum, only Luka Doncic tossed more skip passes per 100 possessions than Giddey did last season. They rank first and second again so far this year.)

The concern around Giddey was fair: as elite of a court-seer as he is, how much will it matter if he 1) can't puncture defenses to create passing windows and 2) shoot well enough to make defenses press up in the first place?

It's encouraging, then, that we're at least getting signs of those questions being answered.

Zooming out, GIddey has improved most of his box-score numbers from his rookie campaign — and has done so in fewer minutes.

There's been real intention from Giddey to get all the way downhill. His drives per game are actually down from last season — 11.9 in his rookie campaign, 11.3 this year — but there's been more exploration when he attacks. After attempting 4.6 shots off of drives last season, that number is up to 5.6 this year. He passed on nearly half (49.7%) of his drives last year; that's down to 38.5% this season.

From the film, two things pop for me. First, the handle is a little tighter — though you still wouldn't confuse him for an And-1 legend. Early nail help doesn't thwart him as easily as it did last season, which has allowed some of those early kick-outs or strips to turn into deeper drives.

Beyond that, the added strength — and the way he's channeling that strength — has led to more fruitful attacks. Though Giddey is a tall ball-handler, he almost always attempts to gain lower ground on his defender. If he's able to get a hint of leverage, he often uses his shoulder to create space inside. The video below features makes and misses, but it should highlight how Giddey is attempting to win on drives.

Last season, the Thunder generated 0.89 points per possession (PPP) on trips featuring a Giddey drive. That ranked a not-nice 69th out of 70 players to drive at least 500 times. You couldn't really use the "he's kicking to non-shooters" excuse for the low effieciency.

We've seen signs of growth this season, with Thunder possessions featuring a Giddey drive generating 0.93 PPP. That's 65th out of 73 players with at least 250 drives at this point — still not good, but trending up.

The encouraging thing is you can attribute the low passing numbers to the shooting, where Giddey has somehow gotten worse luck than last year. Lu Dort and Tre Mann, Giddey's most frequent pass-to options, have shot a combined 22-of-79 (27.8%) from three off of passes from Giddey. That's way down from last season's 56-of-138 (40.6%) clip.

It isn't perfect, of course. Giddey is shooting much better from three, but he still hasn't hit the threshold where defenses will change how he's guarded. The newfound aggression still hasn't materialized at the free-throw line. After averaging a paltry 1.5 free-throw attempts last season, he's at [checks notes] 1.5 this season. He's taken 10 over his last five games, with seven of those coming against the Hornets.

But Giddey is taking steps to solve his woes as a scorer. The newfound aggression hasn't solved everything yet, but the fact that there's aggression to applaud is the key right now.