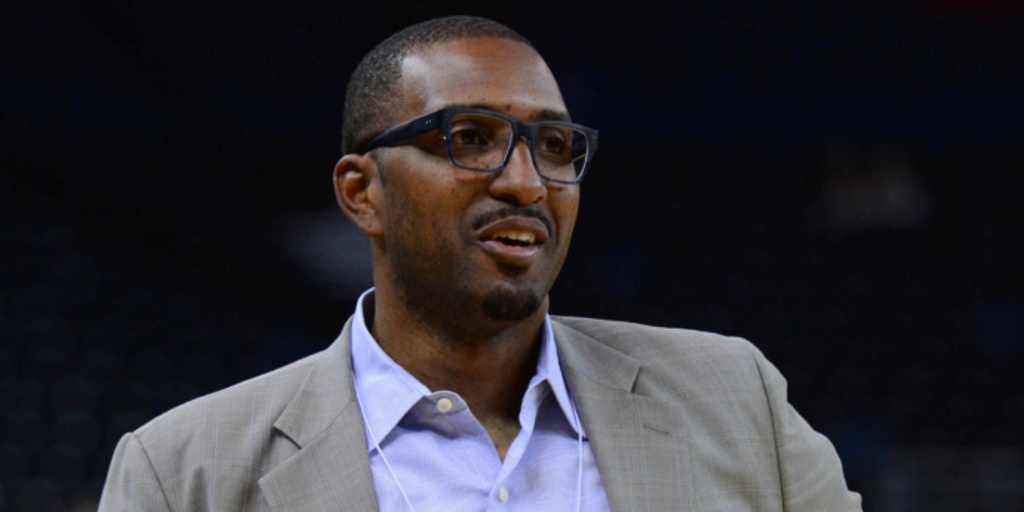 Following a 12-year NBA career, Shareef Abdur-Rahim retired from basketball on September 22, 2008. The former All-Star, Olympic gold medalist and No. 3 overall pick averaged 18.1 points and 7.5 rebounds over the course of 836 NBA games.

After his playing days, Abdur-Rahim spent five years as an assistant coach and assistant general manager with the Sacramento Kings, then served as the general manager of the NBA G League’s Reno Bighorns. From there, he spent two years working in the NBA league office.

All of these jobs helped prepare him for his current role: president of the NBA G League. Over the last four years, the 46-year-old has helped the G League grow – from the launch of the G League Ignite to the league’s expansion into Mexico with the addition of the Mexico City Capitanes (the first G League team outside of the United States and Canada).

Abdur-Rahim opened up to Basketball News about the G League’s growth, the league’s decision to acquire the Capitanes, what his job entails and much more.

The G League acquired the Mexico City Capitanes from the Liga Nacional de Baloncesto Profesional. What went into the decision to add the Capitanes to the G League?

“Then, from a G League perspective, we are flexible and positioned in a way where we can add a team. The process of doing that isn’t as extensive as it is [in the NBA] – even though it’s been a lot of work. We can add a team and have a permanent residency in Mexico City in a way that maybe right now the NBA can’t. It just made a lot of sense and, so far, it’s been going really well. We’re really proud of the opportunity we have with Capitanes."

As you mentioned, tonight will be the 31st NBA game in Mexico City, and today marks the 30th anniversary of the NBA’s first-ever game there. How have the local fans responded to the Capitanes and has the G League become more popular in Mexico?

Abdur-Rahim: “Everything points to it being positive. It’s early, so it’s hard to say the total impact and the numbers and that sort of thing. But you think of having 50 games broadcast in Mexico [and the impact that has]. Attendance has been strong. Merchandise of the Capitanes is selling well and setting records in the G League, setting a new tone for what teams can do with merchandise. Last year, when they weren’t in Mexico City, you had fans traveling to the United States to support the team. Not to mention, the size of the market and everything we can do there. It’s early, but all of the early indicators are extremely positive and point to there being a lot of excitement and support around the team.”

(Editor’s Note: The Capitanes’ home debut drew a crowd of 7,391 fans, which is the largest home-opener crowd in the G League since 2019.) 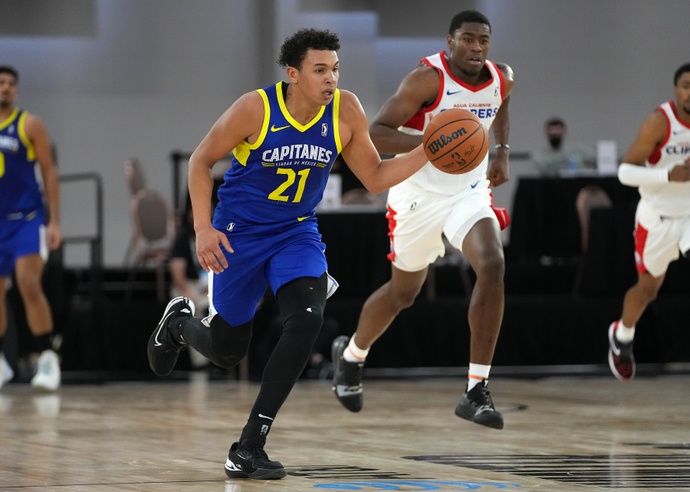 Does the G League hope to continue expanding and adding more international teams in the near future?

The G League is known for getting creative and trying new things, especially in recent years – from creating the G League Ignite, to acquiring the Capitanes, to experimenting with different rules. Are there any other creative ideas you guys are actively considering?

Abdur-Rahim: “This year, all of our overtime games have the final target score – the first team to 7 is the winner. That’s just innovation and trying things and experimenting with rules; that’s kinda the lifeblood and DNA of the G League. It’s something that we always want to look at and try to do. We want to be a little bit different. That’s always a part of what we do, and we’ll keep doing that. Historically, a lot of that [experimenting] has been based on basketball rules, but we want to continue to push the envelope from a business and fan-engagement standpoint as well.”

You were named the president of the NBA G League in 2018, and the league has seemingly made huge strides over the last four years. From when you took over to now, what are your thoughts on the G League’s growth and how far it has come?

Abdur-Rahim: “I’m excited about it, but I think we’re still just scratching the surface as far as what we can be. I’m just looking forward to us continuing to grow, continuing to try new things and continuing to be bigger and stronger as a basketball league, but also an overall business.”

The G League Ignite have attracted top prospects and helped them become top picks in the NBA Draft. What are your thoughts on the Ignite and the success they’ve had?

You played in the NBA for more than a decade, and then you worked as an NBA assistant coach, an NBA assistant GM and a G League GM before becoming president of the G League. How did your time as a player, coach and executive help prepare you for your current role in the G League?

Abdur-Rahim: “I think those jobs all prepared me in different ways for this role and kinda giving me context about the G League. They definitely prepared me, man. And they positioned me and set me up to learn and grow. Some of my skills and the information I have come from my past, and then there was a lot that was left for me to learn and get up-to-speed with, and that’s what I’ve tried to focus on and do.”

Can you share what a typical day is like for you and what your job as NBA G League president entails?

Abdur-Rahim: “A typical day ranges from speaking to our G League team presidents and owners about how we continue to grow the G League and grow our game, to visiting markets and those sort of things, to meeting with our business partners – be it someone like The General Insurance, who is a new partner, or someone like ESPN, who is a more established partner. I think of myself like the chief advocate of the G League – telling our story, communicating the vision and sharing the prospects of our league.

“And then there is the stuff that’s fun like watching basketball, talking about basketball. [Having conversations like], ‘What’s the future of basketball?’ Thinking of how we can continue to make the league better for our players. Our players are unionized now, so there’s now an element of my day where I’m co-existing with and working in partnership with the players’ union. It’s all of that. There are some standard meetings and stuff that we do, but every day has a level of variety and I enjoy that.”

Do you have goals going forward – either individually or for the G League as a whole?

Abdur-Rahim: “Yeah, I think we kind of go through a [goal-setting] process as a league, and my goals are all pretty much connected to our league. For one, we want to continue to be the best place in the world to develop and prepare for the NBA. I know people hear that and think of players, but it’s really for all people at this point – coaches, officials, business people, operations people, media, everything. We want to continue to establish that pipeline even more. We think we have something really exciting and special with the G League when we look at how the talent in the league is evolving and our connection to the NBA, so we want to continue to sell that story and build our audience. I think that telling our story and sharing that message [is important] along with continuing to build up our teams. The success at our team level and, locally, engaging with communities and having 30 strong teams is important, so we want to continue to do that. And we want to keep trying new things. Try to do things in a way that distinguishes the G League in its own way, so it is its own brand. That’s what we want to do.”

I feel like there used to be a stigma that came with playing in the G League, especially if you were a top pick or a veteran player. Now, there are so many players with G League experience and it feels like that stigma is gone, which is great. Why do you think that is?

Abdur-Rahim: “Well, I think it’s two things. For one, I think players have seen so many examples of players who have had success – guys like Jeremy Lin, Seth Curry, Khris Middleton and all of our alumni. There are stories every year of players who start in some form in the G League and then elevate, so we’ve become a real option for players and not something that’s looked down upon. And then I think the integration with the NBA – with so many NBA teams owning G League teams and being connected to their G League team and truly integrating and seeing value in their G League team – has just improved the experience. Without a doubt, NBA teams know and understand the talent in the G League and have continued to invest in the G League, so the experience for players continues to get better, the coaching continues to get better and the opportunities for players continue to get better. As a league, we continue to try to improve the quality of life and the opportunity and the platform [for players] – from the number of teams, to the number of nationally televised games, to adding international games, to having higher salaries, to having more opportunities to get called up or signed to the NBA. All of that has just changed the idea of the G League and we want to continue to build on that.

“This is a really exciting time for the G League. We have 30 teams for the first time – the 28 teams that are connected to NBA teams and then the two independent teams that have their own focuses and purposes – the international team in Mexico and the [Ignite] for young players. If you look at the young talent across our league, I think it’s really a changing dynamic of our league where it’s not just the players who have been overlooked anymore; now, we have these young, exciting players that NBA teams have assigned. We’ve had 14 first-round picks get assigned [this season], from Washington’s Johnny Davis to Charlotte’s Mark Williams. In the past, lottery picks weren’t really assigned to the G League, [but that’s changing]. You also have the younger players who are sort of in-between like Sharife Cooper, Mac McClung – really good players who are just on the cusp – to experienced players like Jahlil Okafor, Norris Cole who are waiting to see what their next opportunity will be. I think it’s just a really exciting time for our league and we want to continue to elevate it and tell our story.”

You’ve been very successful since retiring. What advice would you give to active players who are approaching retirement?

Abdur-Rahim: “If possible, I think it starts earlier than retirement. People tell you this forever, but just know that your time as a player will end, so try to be curious and try to learn as much as you can and don’t just limit yourself to just what you do on the court. There’s so much that’s going on around the game, so try to be curious about that and build relationships. And then, take your time to really find where your path is and what things you want to contribute beyond just being on the court. I think those are some of the really important things. Start early if you can. Be curious and learn as much as you can. Always value relationships – the same people I dealt with as a player are a lot of times the same people that I’m dealing with in my role now. It is a transition, but be open to continue learning and don’t be afraid of it.”