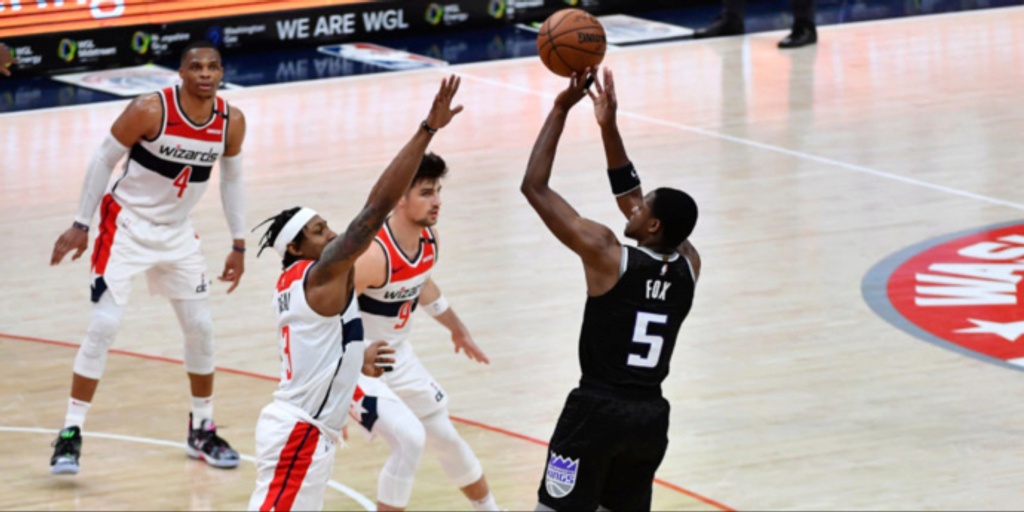 De'Aaron Fox scored 28 points and hit a jumper over Bradley Beal with 0.7 seconds remaining to give the Sacramento Kings a 121-119 victory over the Washington Wizards on Wednesday night.

Harrison Barnes and Richaun Holmes each added 18 points for Sacramento, which got its first win in the third of a six-game East Coast trip. The Kings have gone 4-4 since a nine-game slide that spanned most of February.

De'Aaron Fox rises and WINS it for the @SacramentoKings❗️ pic.twitter.com/l1S4n7s9Tr

“It was one of those moments where it could’ve gone either way,” said Kings coach Luke Walton, who started three players age 23 or younger, including the 23-year-old Fox. “That’s why I say, it’s so good for these guys to be in these type of games.”

Russell Westbrook had 26 points, 14 rebounds and 10 assists — his 12th triple-double of the season — for the Wizards, who have lost five straight since the All-Star break, the last four of those at home.

Alex Len had 13 points and 12 rebounds for Washington.

Both the Wizards and Kings entered Wednesday in 13th in their respective conferences, three places back of the last playoff berth.

“I’ll say the same thing I said the first half of the year: Nobody’s going to feel sorry for us,” Beal said.

The Kings led by nine points after the third quarter and maintained their advantage for most of the fourth before a personal 6-0 run by Westbrook. His driving layup tied the game at 119 with 22.6 seconds left.

After a Sacramento timeout, Fox took the inbounds pass and ran down the clock before he dribbled left and sank a 19-foot jumper over Beal's outstretched arm.

“First thought is always to get to the basket, and he tucked on that,” said Fox, who scored the Kings' last nine points. “You can’t get to the basket every time. So when I dribbled back, I was ready to shoot the ball.”

Kings pick up their first win of the 6-game road trip, struggle in the 4th quarter but De'Aaron Fox's heroics lift Sacramento over the Wizards. Hear from Fox, Tyrese Haliburton & Luke Walton.

Said Beal: “The only thing I probably could’ve done is maybe cut off his left hand, force him right. But he had it going the last 10 possessions.”

Washington called timeout to try and set up a miracle winning shot with less than a second to play, but Westbrook threw away the inbounds.

Kings: Walton said the team is “evaluating treatment plans” for Marvin Bagley III (hand fracture). Bagley was forced out of Monday's loss to Charlotte with the injury. ... Rookie Tyrese Haliburton scored 17 points starting in place of Bagley. ... Holmes fouled out with 1:40 left. ... C Hassan Whiteside (health and safety protocols) and F Robert Woodward II (hamstring strain) were active, although Woodward did not play.

Wizards: Fell to 3-8 in the first of back-to-back games. ... G Raul Neto (bruised ribs) played after coach Scott Brooks said he would be a game-time decision. ... After making 15 consecutive starts, C Moritz Wagner has been active but unused in the last three games.

While Westbrook was sensational late, he twice missed dunks off the back of the rim, the latter coming with 3:30 to play as Washington tried to close Sacramento's slim lead.

Sacramento's improved play has coincided with more consistency from Fox. The third-year pro has at least 20 points in 10 straight games.

“I'm just continuing to play, man. That's pretty much all it is,” he said.