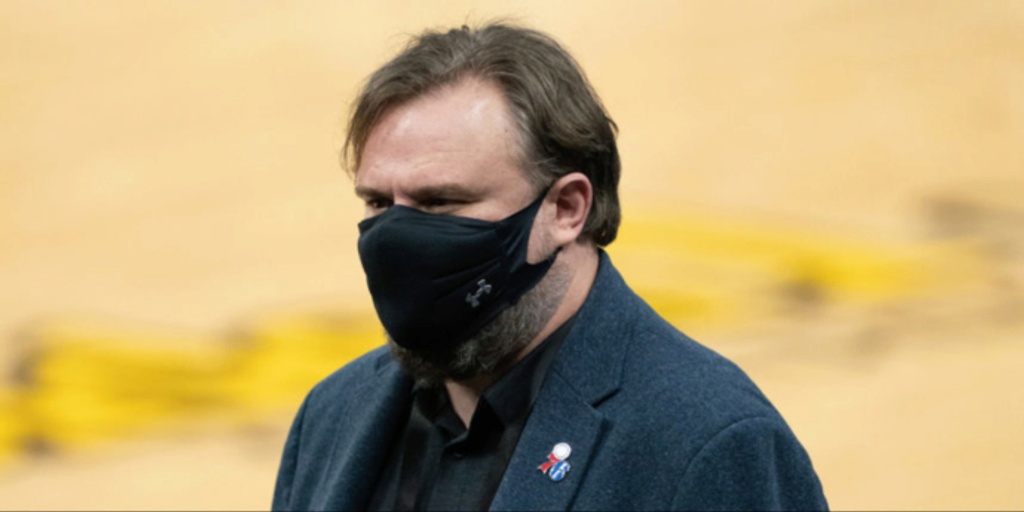 Like any top NBA executive this time of the season, Daryl Morey is trying to better his roster. Sure, NBA Top Shot — sort of a collectible highlight reel — is in its infancy, but Morey is all in on the frenzy stirred by digital dunks and nonfungible fast breaks.

“I just grabbed all the Sixers,” Morey said. “Well, I don’t have all of them because they’re hard to get. But I’ve got Joel (Embiid), I’ve got Ben (Simmons), I’ve got Tobias (Harris), I’ve got (Tyrese) Maxey, I’ve got (Matisse) Thybulle.

“Some of the players need to complain and say, ‘Where are my highlights?’”

So Morey juggles answering questions over Zoom about his first season running the Philadelphia 76ers with a Top Shot search on his laptop for clips of their starting shooting guard.

He can revel that the real one on the court has been about as good as it gets in the NBA. The Sixers (26-12) have the best record in the Eastern Conference headed into Sunday’s game against San Antonio, the first one in Philly with fans since the coronavirus pandemic began. Morey says he can’t wait to see and hear what the fans are all about.

His Instagram Q&As are part of his appeal that connects him with fans and makes them feel like they’re together in the championship chase.

“Younger fans want to feel like they’re part of something,” Morey told The Associated Press in an interview this week.

Morey is here after 14 seasons running the Houston Rockets to make the Sixers feel like they’re part of something they’ve largely missed out on since 1983 — the championship conversation. Yes, that’s the 48-year-old Morey fist-bumping general manager Elton Brand after big buckets and lingering in his row with the front-office team long after the final horn, but he oversees a team largely in place when he was named president of basketball operations in November.

Simmons and Embiid, an MVP candidate, are the All-Star cornerstones and Harris is having a career year under Doc Rivers. Rivers, who coached the Boston Celtics to the 2008 NBA championship, in his first season in Philly has maximized the talent on a team swept out of the first round of the playoffs last season.

“He really knows his stuff and does it as good or better than anything I would do if I dove in,” Morey said. “It allows me to just focus on my job, which is try and get better players for him.”

The NBA trade deadline is March 25 and that means rumors and fantasy deals are at the forefront in Philly — the Sixers were in the mix for James Harden before he was traded to Brooklyn — and Morey said he’s not necessarily pursuing a blockbuster to shake up the lineup.

“We have a great group, a great chemistry, they’re playing at a high level, they play even better against very good teams,” Morey said. “That’s something fragile and we need to respect it. Long story short, everyone expecting some big thing, I would ask them to be excited about who we have more than what’s possible.”

The path toward a top seed in the East — already more rugged in the second half, starting with a six-game road trip later this month — cratered when Embiid went down Friday night with a bone bruise on his left knee. Embiid has 29.9 points and 11.5 rebounds in 31 games and blossomed into the rarified air of true NBA elite players.

Simmons is a regular triple-double threat and Harris went from overpriced scapegoat to legitimate All-Star candidate averaging a career-best 20.2 points. Curry, a 44% career 3-point shooter, is just off that clip at 43%. The Sixers are 14th in the NBA in 3-point percentage but only 28th in total attempts. On Morey's watch, Houston averaged 45.3 3-pointers per game last season, tops in the league.

“Well, we happen to have the best inside players in the NBA,” Morey said. “I don’t care how we win, just that we win. I would say our offense does need to be better. You want to be at least top 10. If you ask me, how are we going to make our offense better, it wouldn’t be by shooting 3s. Joel, Tobias and Ben all are top 10 in terms of being able to score 10 feet and in, so I don’t know why you’d do anything much else. The other guys we have are good at spacing. But Ben, Joel and Tobias are so good inside, we don’t need it.”

Morey and Rivers are both experienced at handling superstar players with supersized egos, and making sure one basketball can satiate three scorers hasn’t become an issue — if it becomes an issue — quite yet.

“I’ve found people are generally who they are by that age,” Morey said. “But I would say one source of tension that can come up that we are past, is that until everybody gets paid, I think there can be tension. All our main three guys are all paid, and hopefully feel well paid. They should. We’re past where a lot of tension can come from that.”

Morey insists he still can’t believe he’s in this position and that he meant it when he said upon leaving the Rockets that he was taking a year off to spend time with his family. He joked he has texts from his two adult children wondering if they still loved him after he took the Sixers job.

“I feel like I want to grab my wife so she can tell you,” he said, laughing.

His wife recently joined him in Philadelphia — and his home is furnished now after a post showing his bachelor pad in January with just a folding chair and TV.

“I didn’t think anyone would say, ‘OK, we’ll add someone 10 days before the draft,’” Morey said.

Once the Sixers called, Morey got right to work. He undid two of the 2019 major moves on draft night when he traded free-agent bust Al Horford to Oklahoma City and sent Josh Richardson to the Dallas Mavericks as part of a deal for Curry.

Landing Curry in a trade seems like a breeze compared with trying to find him in Top Shot. Morey’s excitement flickers out after he thought he had a lead on a highlight.

“Ah, that’s the issue, he’s still on another team,” Morey said. “I don’t want that. I want Sixers. I want the best Curry on the Sixers.”

Morey is almost an open book compared with his recent predecessors such as Bryan Colangelo or Sam Hinkie, who worked with Morey in Houston and was the mastermind behind Philadelphia’s rebuild known as The Process.

His protegee got the championship ball rolling orchestrating the moves that landed them Simmons and Embiid. Morey’s steadfast belief that the NBA is a superstar-driven league has him — talking to the AP before Embiid's injury — convinced he can finish the job he failed to achieve in Houston and win the championship.

“I definitely think we can win the title,” Morey said. “Obviously challenging, but for sure, good enough.”