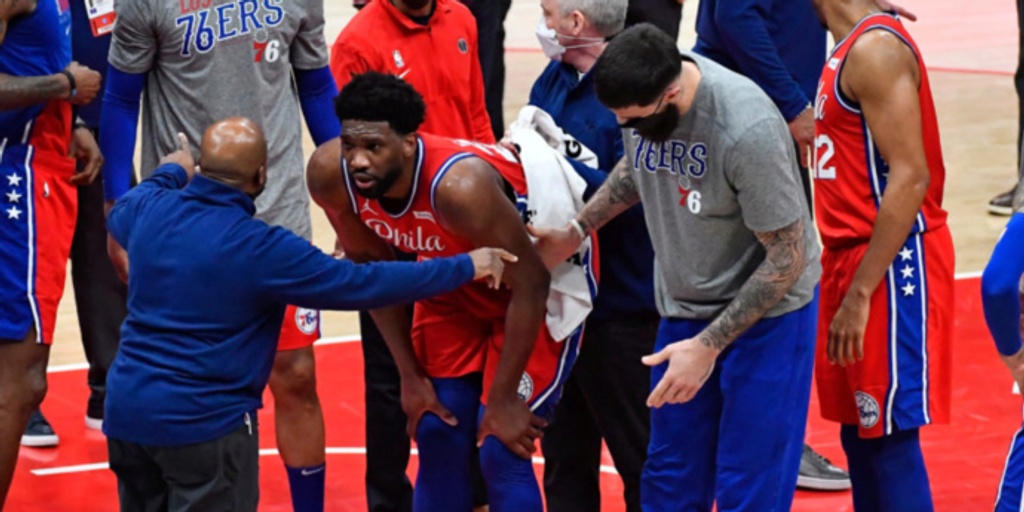 Joel Embiid is not the NBA MVP favorite anymore. He is not even second. That spot now belongs to Nikola Jokic.

The All-Star center for the Philadelphia now sits in third place after injuring his left knee -- the team is calling it a bone bruise. The Sixers said he will be re-evaluated in two weeks, and multiple media outlets said he could be back in three weeks.

DraftKings, the No. 2 sports gambling site in the legalized U.S. marketplace, took down its MVP odds overnight and then put them back up at midday Saturday. LeBron James is back to being the favorite at 3/2 (+150), and Jokic of the Denver Nuggets is second at 2-1.

Embiid is +426 at DraftKings and +600 at FanDuel, where spokesman Kevin Hennesey said he has the book’s single biggest liability all season in the MVP market.

DraftKings had its own sentiment.

“The news could have been worse,” said Johnny Avello, head oddsmaker at DraftKings. “The guy was putting up MVP numbers every single night, but LeBron was right behind him, and money continues to flow in on LeBron. Also, three weeks could turn into something more, whereas there are no unknowns with the other two guys (James and Jokic)."

Philadelphia has a one-game lead over the Brooklyn Nets as the top team in the Eastern Conference heading into Saturday night’s games, as Doc Rivers and Co. have won four in a row. In fact, the top four teams in the conference – the Sixers, Nets, Bucks and Heat – have all begun to string together winning streaks.

The Nets have 3/1 odds and the Sixers are 12/1 to win the championship, a sign that gamblers are putting their team bets on Brooklyn even though Embiid has been drawing a large percentage of the MVP money.

“LeBron James is now the favorite at +150 in the MVP market at the FanDuel Sportsbook. Embiid’s recent injury news has moved Jokic (+230) and James ahead of the 76ers' big man. Embiid has been a customer favorite all year," FanDuel's Hennesy said. "He opened the season at +3600 and Embiid’s impressive season has seen his MVP odds go below +550 and garner 20% of all bets in the MVP market. The MVP race is going to be interesting to watch."

The news also comes as gamblers are turning their attention to the NCAA Tournament in Indianapolis, where most of America will get its first extended look as projected No. 1 draft pick Cade Cunningham and Oklahoma State. The Cowboys have reached the semifinals of the Big 12 Tournament and will be on ESPN tonight against Texas.

But back to the subject matter -- the Embiid injury looked quite serious when it happened, and a stretcher was brought onto the court before Embiid walked off under his own power.

Despite the sportsbooks pretty much making it look like a three-man race, NBA writers typically do not make up their minds about an award this early in the season. They did last year with Giannis Antetokounmpo, but that was under different circumstances because the Bucks had a 53-12 record when the season was halted due to the pandemic. Nine times out of 10, maybe more, the award is up for grabs at the midway point of the season.

This season, James Harden of the Brooklyn Nets is a viable candidate, as is Devin Booker of the Phoenix Suns, who took a five-game winning streak into Saturday night’s game against Indiana and have won 17 of their last 20. Like Harden in Brooklyn, Booker faces the prospect of a teammate (Chris Paul) getting equal credit for his team’s success.

But this award is going to be won over the second half of the season, and Booker is currently 150-1 at DraftKings. That is not a misprint.