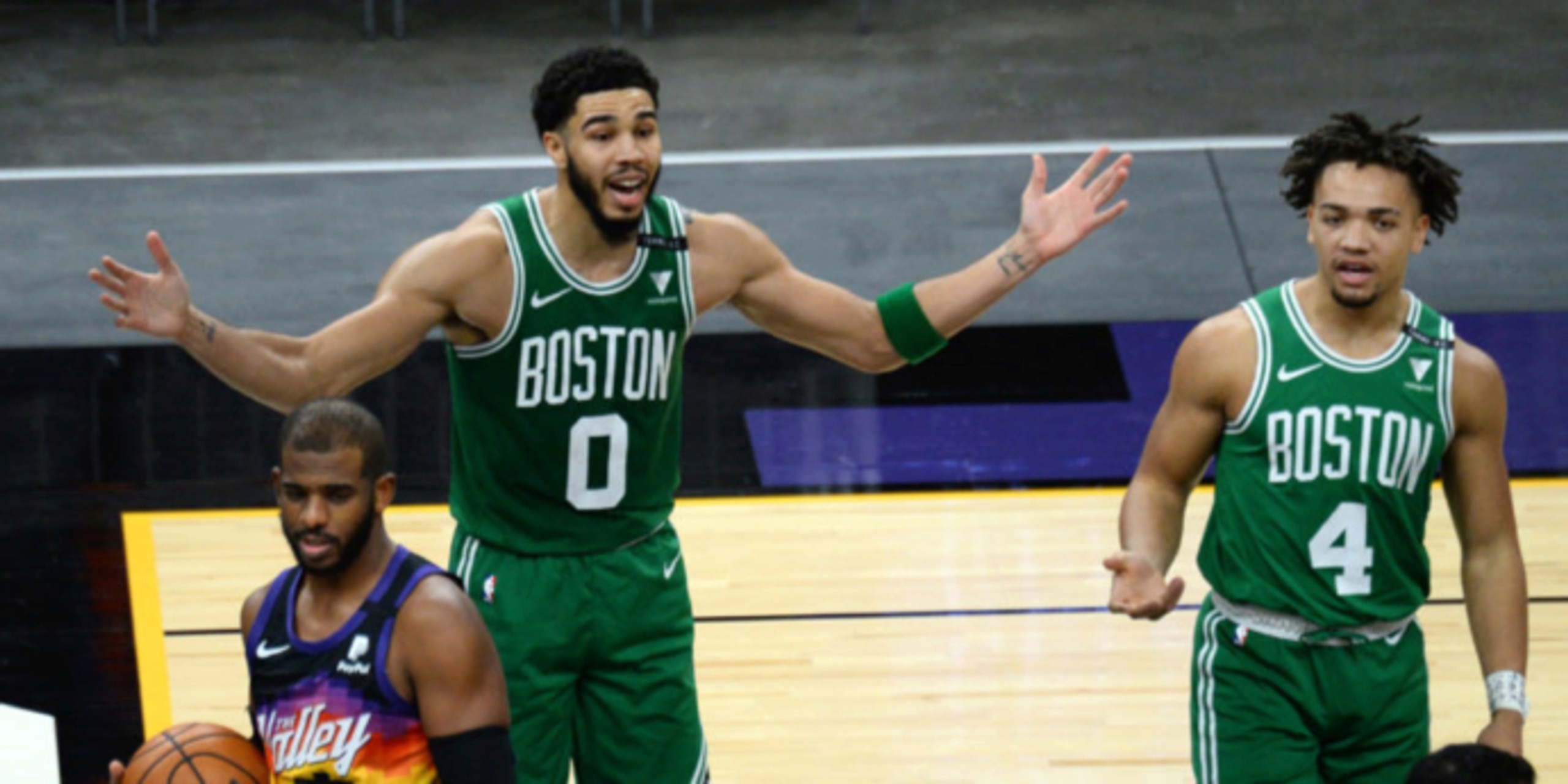 There are 18 days until the NBA All-Star break, which was supposed to be a break with no All-Star festivities. But then that plan changed, much to the dismay of many of the league’s top superstars.

The Utah Jazz look unstoppable, sort of like the Milwaukee Bucks did at this time a year ago, and there is not a whole lot of defense being played as teams slog their way through the mid-winter schedule and make adjustments on the fly (whether because of coronavirus issues or injuries or slumps).

Every night brings major surprises, some of them positive – as fans of the Detroit Pistons could tell you. Until recently, they were the worst team in the East; now, they are making us NBA hardcores take notice of the likes of Saddiq Bey and Mason Plumlee.

The week begins with news that Kevin Durant and Anthony Davis will both be back on the shelf; Durant with a hamstring issue and Davis with an Achilles. Neither injury is particularly serious, and let’s all remember that what happens in February often has very little impact in May and June when things ramp up.

1. What on earth is wrong with the Boston Celtics? They got toasted by the Washington Wizards, the worst team in the East, on Sunday afternoon to make it four losses in their past five games. Prior to that, they lost to the Detroit Pistons and they are now 13-13. It looks like they miss Gordon Hayward more than we anticipated, and there is no underestimating how important Marcus Smart is to that team. Payton Pritchard has earned Brad Stevens’ trust, but what about rookie Aaron Nesmith, the No. 14 overall pick in the draft? He did log 29 minutes of garbage time on Sunday, which is a step in the right direction... or he was being showcased.

2. Why are so many superstars speaking out about having to play in an All-Star game? Well, they were told at the outset of the season that they were going to have a one-week break, and then that promise was broken. NBA contracts include language that obligates players to participate in All-Star activities if invited, so three Saturdays from now a bunch of players will be flying into Atlanta, locking themselves in their hotel rooms and getting ready for the annual Sunday night show. Let’s just hope the fourth quarter is competitive, like it normally is.

3. When can we expect the Utah Jazz to lose a game? On Thursday, we were wondering whether it would come in a span of the next eight days, because the schedule was getting tough for them. But they beat the Milwaukee Bucks by 14 and the Miami Heat by 18. Tonight, it is Joel Embiid and the Philadelphia 76ers trying to end the Jazz’s hot streak, and then Utah plays back-to-back games against the Clippers at the Staples Center on Wednesday and Friday. If Paul George (right foot) and Kawhi Leonard (left leg contusion) are both healthy by then, we will have a litmus test.

4. Will the New York Knicks or Brooklyn Nets trade for a big man? Brooklyn has had a donut problem (a hole in the middle) since Jarrett Allen was traded in the James Harden deal, and Noah Vonleh and Norvel Pelle do not look like long-term solutions. The Cleveland Cavaliers are sitting Andre Drummond until they can find a trade partner, and JaVale McGee is expendable as well. The same goes for Hassan Whiteside in Sacramento. The Nets may not have the assets to trade for any of them unless they surrender Joe Harris, so they’ll likely wait to see who is bought out. Meanwhile, Knicks coach Tom Thibodeau told reporters that he is OK with moving Julius Randle over to center while Mitchell Robinson recovers from a broken hand (and they also have Nerlens Noel). The Knicks have won four of their last six games, but will have to contend with Clint Capela and Nikola Vucevic in their next two games, after which Leon Rose, Thibs and Worldwide Wes may need to come up with a plan to find a new center.

5. What is wrong with the Milwaukee Bucks? They lost to the Oklahoma City Thunder last night and have been surrendering more than 123 points a night in their current three-game losing streak. A year ago, on Feb. 15, they were 46-8 and Giannis Antetokounmpo had pretty much wrapped up the MVP award. But this season, they have been running hot and cold like a leaky faucet (the three recent losses were preceded by five-straight wins, which followed consecutive losses, which followed consecutive wins). They’ll need better, more consistent production from Brook Lopez, who scored 6 points last night against Al Horford. His scoring has dropped from 12.0 points per game to 10.8, and his assists are down from 1.5 to 0.6. His next double-figure rebounding game will be just his third of the season. It is worth noting that Milwaukee is trying to get their new pieces acclimated, which hasn’t helped.

6. Which teams figure to be active at the trade deadline? I would say the New Orleans Pelicans are the team to watch. If the supporting cast around Zion Williamson and Brandon Ingram continue to underperform, they will look for hungrier players along with extra draft picks to add to the ones they got from Milwaukee in the Jrue Holiday-Eric Bledsoe deal. New Orleans has lost its last three games -- not playing a lick of defense against Chicago, Dallas and Detroit -- and 11-15 is not where they wanted to be, especially with Zion shooting an unfathomable 65.5 percent from the field this month (he was 14-for-15 against the Mavs on Friday). Boston, New York and Brooklyn have already been mentioned, and major underachievers (Miami, Dallas, Toronto) are always looking to tinker in order to bolster their roster for a playoff push.

7. What makes this season very different from last year’s campaign? Aside from the coronavirus disruptions, the rule change that will allow for 20 of the 30 teams to qualify for the playoffs (including the play-in tournament) has disincentivized players from competing at their highest level during the regular season. One Eastern Conference coach (who spoke on the condition of anonymity) said it has been one of the worst rules changes ever enacted. We’ll see if he feels the same way if his team finishes ninth or 10th and has a chance to play meaningful postseason games rather than beginning preparations for the draft extra early.

8. Why are the Phoenix Suns sitting in fourth place in the Western Conference? The addition of Chris Paul is the biggest reason, and they are 6-0 thus far on a seven-game homestand that ends Tuesday night against a Brooklyn team that will be without Kevin Durant. They’ve won nine of 10, and at a certain point, Mikal Bridges has to enter the Most Improved Player conversation (he is 100-1 at DraftKingsSportsbook, where Chris Paul is 500-1 to be MVP).

9. Who is the Coach of the Year? One would assume that Quin Snyder (Jazz) and Doc Rivers (Sixers) would be the frontrunners, but get this: None of the major sportsbooks operating in the legalized U.S. sports gambling market have Coach of the Year odds listed. This award typically goes to the coach whose team has overachieved the most, and everyone expected the Sixers and Jazz to be good. So Monty Williams in Phoenix, Thibodeau in New York, Terry Stotts in Portland (he lost C.J. McCollum and Jusuf Nurkic) and James Borrego in Charlotte may be in the mix.

10. Who will be the No. 1 pick in the 2021 NBA Draft? Cade Cunningham of Oklahoma State is the flavor of the moment, followed by Jalen Green of the G-League Ignite, a team that just began playing bubbleball last week. Scouts are being hampered by their inability to get inside gyms, watch prospects closely and observe things such as body language, pre-game habits, interactions with teammates, etc. Because of that, this summer’s draft is going to be more of a crapshoot than usual, and the team with the most first-round picks is Oklahoma City with three. Houston and New York have two apiece.

11. What is the best game to watch over the remainder of the first half of the season? Many teams are starting to allow fans back into the arenas, but we will probably not see a full house until next season, which removes the crowd factor for the most part (shout out to Courtside Karen), which would normally make certain matchups more enticing. If Kevin Durant and Anthony Davis are back by Thursday, Nets-Lakers on TNT is a candidate. We have Jazz-Clippers on Wednesday and Friday, followed by a Heat-Lakers NBA Finals rematch on Saturday (ABC) and Nets-Clippers the following night. Fans will be allowed at Madison Square Garden on Feb. 23 when Steph Curry faces the Knicks, but the winner in this category is Lakers at Jazz on Friday, Feb. 24.

12. Who will win the Rasheed Wallace Award (a.k.a. Hothead of the Year)? Dwight Howard of the Sixers and Russell Westbrook of the Wizards are tied for the league lead in technical fouls with eight apiece. Among coaches, Nick Nurse of Toronto leads with five.

13. What record might fall? Jose Calderon holds the record for the highest free-throw percentage (98.1 percent in 2008-09 for Toronto). Entering Monday’s games, Suns guard Chris Paul is 68-for-70 (97.1 percent) and Nets guard Kyrie Irving is 77-for-81 (95.1 percent). If either has a few games of perfection from 15 feet away, perhaps Calderon’s record will be in jeopardy.

14. Anzejs Pasecniks of the Washington Wizards was released a month ago after appearing in one game. In five minutes of playing time, he committed six turnovers to go along with two personal fouls, one assist and one offensive rebound. Ish Smith converted the bucket off the Latvian kid’s assist. That’s a rough outing.

15. Monte Morris of the Denver Nuggets leads the NBA in assist-to-turnover ratio at 5.5 (among qualified players) and Pat Connaughton of the Milwaukee Bucks is at 5.7. Among players who log major minutes, DeMar DeRozan of San Antonio is at 4.20. In the steals-to-turnover ratio category, Matisse Thybulle is head and shoulders above everyone at 5.0. Among players who log major minutes, the league leader in steals is Jrue Holiday of Milwaukee with 1.91 per game.

17. The league’s oldest player, Udonis Haslem of Miami, wears uniform No. 40… matching his age. The youngest player, Oklahoma City’s Aleksej Pokusevski, the No. 17 overall pick in the 2020 draft, is 19 years old and has 19 blocked shots.

18. What’s the season-low for offensive rebounds in a game? One. The Philadelphia 76ers were the team to grab a single offensive rebound against Washington on Jan. 6, when the Sixers scored 141 points. Danny Green grabbed the lone offensive board.