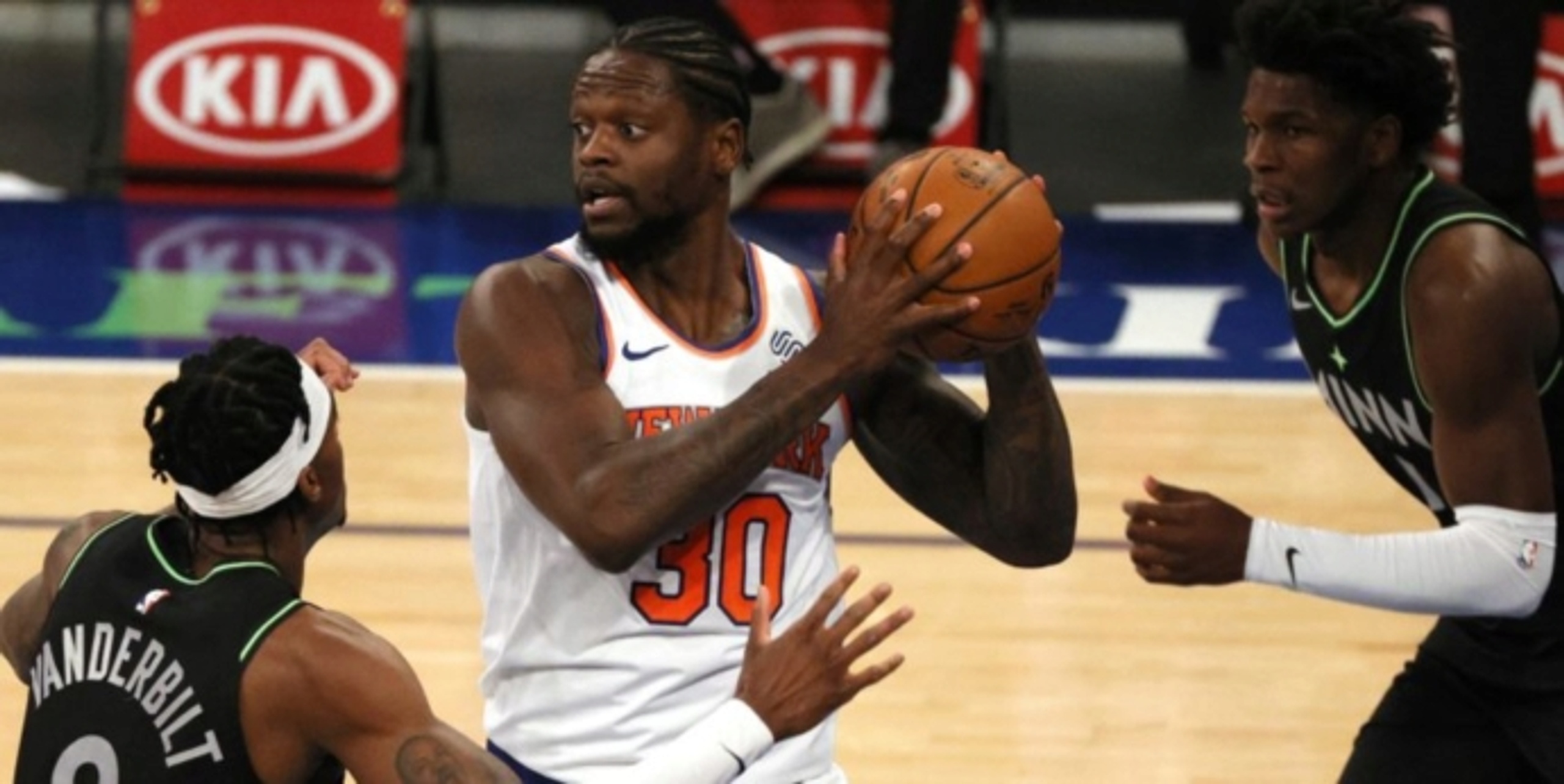 On Julius Randle, his rise in New York and the audacity of hope

The legend, as he'd done for the duration of his 20-year career, commanded all eyes.

As Kobe Bryant prepared to host Kevin Durant, Russell Westbrook and the Oklahoma City Thunder at home for the last time in the final season of his storybook career, all eyes were on him.

Throngs of media followed him in and around the bowels of Staples Center. In and out of the trainer’s room, back-and-forth from the locker room, with bandages on his ankle and a tightly-wrapped icepack on his ailing right shoulder, an at-peace Bryant exchanged pleasantries.

Meanwhile, on the floor, before the television cameras started rolling and before fans began streaming into the building, Julius Randle was quietly and meticulously plying his trade.

Working in the background while the television cameras and news reporters were focused elsewhere has become Randle's personal story. Squeezed between the margins over the first six years -- by Kobe, LeBron James, Anthony Davis and even Zion Williamson -- in New York, Randle has captured the full imagination of a franchise he hopes to call his own.

Bridesmaid no longer, with an enclave of supporters on the bench and within the organization, Randle is finally playing like someone who’s found what he’s been searching for since he was drafted in 2014: purpose.

All-Star or not, the Knicks would be wise to consider the improbable; perhaps he is indeed capable of helping to carry the franchise forward.

Selected by the Los Angeles Lakers seventh overall in the 2014 NBA Draft, Randle was one of a group of young players believed to be the nexus between the era of Bryant’s championship-contending squads and a future generation of greats.

Perhaps an omen of what was to come for him in purple and gold, Randle’s rookie season lasted just 13 minutes. In a meaningless play in a blowout loss to the Houston Rockets -- in the first game of the season, nonetheless -- Randle broke his right tibia. His freshman year ended before it even began.

While battling the likes of Roy Hibbert, Brandon Bass, Larry Nance Jr. and Luol Deng for minutes, Randle steadily improved, but when LeBron James took his talents to Los Angeles, he realized the opportunity to spread his wings wouldn’t be found playing court jester. After requesting the Lakers renounce his rights, Randle sought the opportunity to soar with the Pelicans in New Orleans. After less than one season, though, any thoughts of a long-term partnership with Anthony Davis were dashed. Ironically, Davis wanted to form his own partnership with LeBron.

Coming off of a career-year in New Orleans, Randle seemed destined to assume the vacated front court in New Orleans, but an improbable lottery victory meant he would have to compete with Zion Williamson for minutes and repetitions. Not ideal.

Know this: the majority of NBA players are competitive junkies who spend their formative years succeeding on the basketball court. Their hope, mostly, is to have their names mentioned among other greats. At various junctures, a player has to consider whether they’re happy with their situation, their career and their legacy. They can either settle with where they are or pursue more elsewhere.

Randle was not unique when his time came, but when the roads diverged for him, he chose the one that led to New York. The former Wildcat made the decision that many before him didn’t; he opted to try to fulfill his mighty potential under the bright lights and intense scrutiny of Gotham City.

When the Knicks signed Randle to a three-year, $62 million deal in July 2019, the rationale behind the decision was easy to accept. He was a 24-year-old big man who was coming off of the most productive season of his young career with per-game averages of 21.4 points, 8.7 rebounds and 3.1 assists. His ascension was especially noteworthy considering his opportunities, to that point, had been limited. He was never given the minutes, repetitions or trust of a cornerstone. In both Los Angeles and New Orleans, he was believed to be a supporting player, at best.

To the Knicks’ benefit, that belief may have been incorrect.

Producing wins and leading a young team on his broad shoulders, there’s one truth that can already be drawn from Randle’s production in New York; he’s not exactly the kind of player that smart NBA teams would be quick to trade -- he’s the type that would be built around.

With the Knicks’ front office reportedly fixated on playoff contention this season, the decision-makers have been proactive in ascertaining the availability of impact players including Buddy Hield, Victor Oladipo and Bradley Beal. But word to the wise: it’s been 10 years to the day that the Knicks traded their farm for Carmelo Anthony.

Although Anthony was the most talented player dealt in the 2011 trade that saw he and Chauncey Billups land in New York, the sum of the pieces sent out by New York, it could be argued, were more than the product of Anthony's tenure. In other words, reasonable minds may come to different conclusions when determining whether the trade was worth it. And therein lies the lesson.

Basketball isn’t a game played on paper, and success in the NBA isn’t simply about putting a collection of players together who can get buckets. To a large extent, a player's individual success hinges on their ability to develop trust in their coaching staff and front office and their ability to find a sense of fulfillment in their work.

Before considering whether Randle should be peddled to help the team acquire a player whose perceived value is higher, team president Leon Rose and general manager Scott Perry should think long and hard about how a young and impressionable team would handle seeing Randle’s strong play rewarded by a trade.

When players begin seeing the NBA as merely being a business, it’s often detrimental to their ability to invest in the success of their team. Doing so often requires not only sacrifice, but a belief in something bigger than themselves. When players see other players they’ve grown fond of rewarded by being traded against their will, it sends an unmistakable message that, at the end of the day, everyone needs to look out for themselves.

In terms of culture and team-building, the most important thing that a front office can provide a collection of young players is a sense of direction and a feeling of belonging. If the plan changes every season, or if new players are continually cycled in and out of the locker room, it only takes so long before the message is received by the players: New York isn’t your destination, it’s only your connection point. Inflate your numbers here as best you can to get yourself another payday when your time is up.

It’s the attitude that was developed by a fair amount of players who have come and gone because, as stated by Carmelo Anthony himself, there was a new team every year.

Learn from the past or be doomed to repeat it. You can only sail so far on a rudderless ship.

It’s been just 30 games since Julius Randle began playing for Tom Thibodeau. And after seven years, the 26-year-old is finally playing like someone who’s not only found his calling, but someone who’s capable of helping to lead a franchise out of the doldrums.

Perhaps in New York, Randle can finish what he began in Los Angeles and New Orleans.

To this point, after six years of searching, in New York, he’s earned the opportunity to find out. It's been 10 years since the Knicks acquired Carmelo Anthony. It doesn't take a rocket scientist to realize that, in it all, lessons abound.