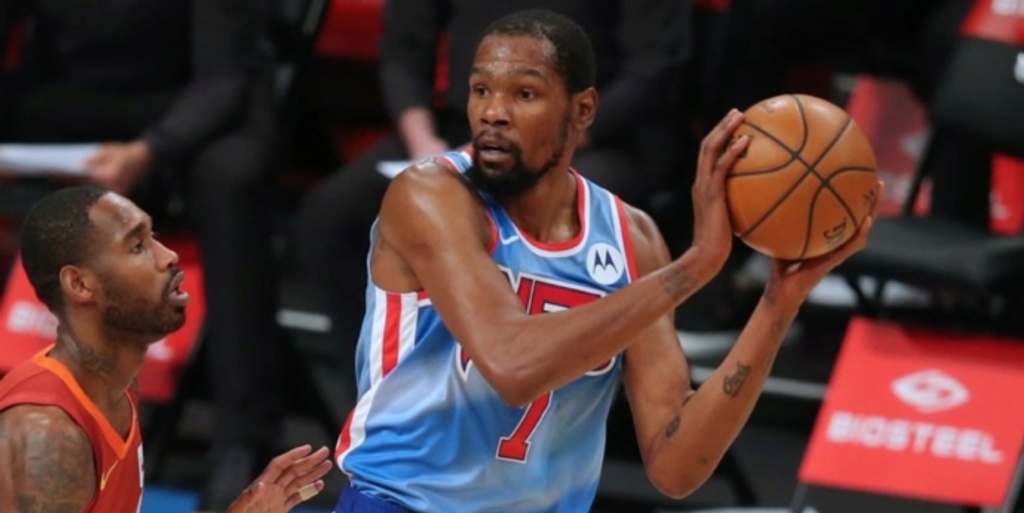 Not long ago, a ruptured Achilles was considered a death sentence for an NBA player’s career.

There was a long list of players who were never the same following their Achilles injury: Elton Brand, Kobe Bryant, Mehmet Okur, Chauncey Billups, Brandon Jennings, Christian Laettner, Jonas Jerebko, Anderson Varejao and so on.

Dominique Wilkins was the lone example of a player who returned and continued producing at a superstar level (as he averaged 29.9 points, 6.8 rebounds, 3.2 assists and 1.0 steal per game).

That’s why the basketball world was devastated when Kevin Durant ruptured his Achilles on basketball’s biggest stage during the 2019 NBA Finals. Durant is one of the greatest scorers in NBA history and nobody wanted to see his name added to the list above.

Fortunately, Durant hasn’t missed a beat since returning from his Achilles injury. Somehow, in his first nine games back, he looks like the exact same player. The 32-year-old is averaging 30.7 points, 6.9 rebounds, 5.7 assists, 2.9 threes, 1.0 block and .9 steal (while shooting a ridiculous 54.8 percent from the field, 48.3 percent from three and 86.7 percent from the free-throw line).

He's posting career-highs in assists per game, threes per game, field goal percentage, three-point percentage, True Shooting Percentage and assist percentage. His 30.7 points would be the second-highest mark of his career (which says something considering he's a four-time scoring champ). And he’s doing this while getting acclimated on the Brooklyn Nets and adjusting to new coaches and teammates.

“Just trying to be the best I can each possession and each rep,” Durant said recently. “I've been always trying to take that approach as a pro, and then you got guys around you who have that same approach and love for the game. It's making me better and hopefully rubbing off on my teammates as well. ”

Many fans take Durant's greatness for granted since he has consistently posted jaw-dropping numbers for over a decade and he makes the game look incredibly easy, but it's important to note that we're witnessing something special right now.

If Durant is performing this well out of the gate, how will he look once he shakes off the rust and gets used to his new situation?

“He continues to find his rhythm,” Nets head coach Steve Nash said. “He looks great and he’s going to continue to feel more and more comfortable.”

Nash is confident that Durant can return to his MVP form, but he has repeatedly said that Durant should give himself 15-to-20 games before judging himself and expecting to be back at 100 percent. And after nine games, Nash is revising that timetable a bit,

“It’s a pleasure to coach him; he’s so talented and loves the game,” Nash said. “Part of the process of him coming back to playing is that it’s not going to be smooth off the bat. I said early on [that it’ll take] 15-to-20 games and I think that’s even... maybe I need to be more conservative with that number, just because it’s such a lot thrown at him [during] the climb he’s had back here.”

When Wilkins came back from his ruptured Achilles, he said the first few games were the toughest.

“The thing you keep thinking about is, ‘What if I tear this thing again? What if I hear that pop?’ You think those sort of things, but you must get those things out of your head,” Wilkins told me in 2019. “You can’t even think about that stuff. The moment I realized I was back to being myself came during our training camp. I hit the ground really hard, and I immediately grabbed my ankle. But I didn’t feel any pain. That’s when I said, ‘You know what? If this thing is going to pop or tear, it’s happening on my terms. I’m going all out.’ I just had to think like that to get that [fear] out of my head.

“We played two really great teams in a back-to-back when I first returned (the Knicks and Bulls). I had two great games, which did wonders for my confidence. I knew, at that point, ‘Hey, I’m back in rare form.’ That’s when I realized, ‘Only you know how tough you are. Nobody else knows.’ That confidence and toughness helped me get over my fear of hurting myself again.”

Durant’s monster numbers have to be good for his confidence, and the fact that he’s already playing in back-to-backs suggests that he’s pain-free and blocking out that fear of re-injury.

Also, Wilkins told me that he stayed motivated by listening to his doubters.

"I just used it as fuel to prove everyone wrong. I worked twice-a-day, every day, for nine months. I was working hard. My inspiration came from all of those negative articles that talked about how old I was and how difficult it would be to return. I kept all of those articles and I put them on my bathroom mirror, so that I’d have to see them every day. That was my inspiration.”

As if the Nets weren't already under the microscope, all eyes will be on them going forward now that they’ve assembled a Big Three of Durant, James Harden and Kyrie Irving.

The Nets face the Orlando Magic tonight at 6 p.m. ET and while Irving is out, Harden may make his Brooklyn debut.