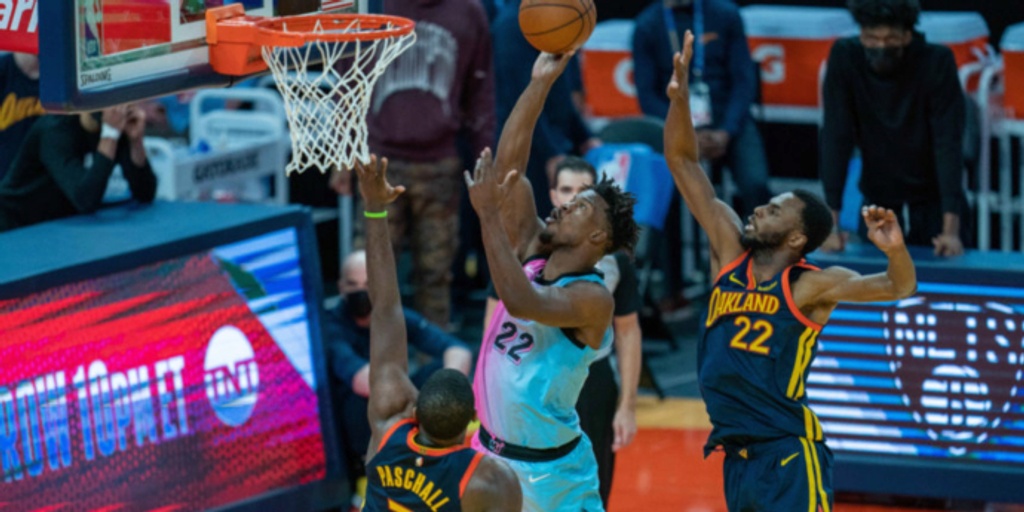 Jimmy Butler is taking over at the right time

It's been hard to make sense of the Miami Heat this season.

The offense hasn't been as machine-like as it was last year. There's been a dip team-wide in shooting efficiency. Rim pressure has been inconsistent; the lack of availability has only accentuated that issue.

The defense is scrambling more by design. There's an added emphasis on pressure -- traps, full-court presses, aggressive fronting in the post -- though the high-risk nature of their scheme puts a strain on everyone.

This isn't the team that lit up the bubble. Between COVID, injuries, midseason transactions and opposing teams updating their scouting reports, the Heat have constantly been in flux.

It's fair to say the Heat have struggled to walk those tightropes consistently. That dynamic has kept them out of the East's upper echelon; yet, the can-they-get-it-together nature of their outlook also makes them an unappealing matchup option for teams in that upper echelon.

They may be starting to find that groove. They've won nine of their last 12 games dating back to April 18. The offense is humming at a top-three rate during this stretch; the defense has slipped, though an elite clip during third quarters (103.8, top-four) is a nice sigh of relief for the fan base.

It should come as no surprise that Jimmy Butler is balling during Miami's hottest stretch of the season. Frankly, he's been part of everything good for Miami. They're 31-19 (.620 win percentage) in games Butler has appeared in, and 6-12 in the games he's missed.

An MVP case may be a bit much -- we shouldn't overthink the Nikola Jokic thing -- but it's important not to lose sight of how good Butler has been, and how well the Heat have played with him.

He ranks just outside the top-10 in drives per game (15.9), and possesses one of the highest foul-drawn rates among volume drivers. His 8.1 average free throw attempts per game ranks No. 5 in the NBA; only five players draw more fouls on two-pointers than Butler.

Butler does a tremendous job of getting his defenders off balance. While he doesn't possess some ankle-breaking dribbling package, he's able to shift the feet of his man from the triple-threat position. Ball fakes, jabs, and rip-throughs all aid Butler in his quest for paint touches.

Once he gets downhill, Butler consistently dislodges defenders with elbows and shoulder nudges; his ability to gain inside leverage with his body, then power through defenders is a skill rivaled by few players in the league.

That consistent rim pressure opens the floor for everyone else. He's able to spray it out to corner shooters with simple kicks or jump-passes.

Watch how Butler attacks the ICE coverage deployed by the Celtics here. The pacing is what matters; Butler probes a bit with the first dribble, then snakes inside of Jayson Tatum on the second. He's reading Kemba Walker on the weak side, waiting on him to tag Bam Adebayo on the roll. Once Walker makes contact with Adebayo, Butler flings a dart to Ariza.

Butler goes to his should-be-patented shimmy-and-go to get Tatum off balance. Peep how low he gets on his second dribble to get under Tatum's chest and create an advantage for himself. Not only does Butler get to his spot with a favorable angle, he also compounds the advantage with an up-fake to get Luke Kornet in the air. From there, he's able to hit Dewayne Dedmon in the dunker spot for a lay-up.

It's amazing that Butler has been able to put up this sort of production -- 21.6 points (career-high 60.6 TS%) and a career-high 7.2 assists -- without a threatening three-point shot. A bounce-back season from mid-range covers some of the gap; his 41.7% clip on middies isn't an elite mark, but it's 10 percentage points higher than it was last season.

With the type of production Butler provides as a driver -- both as a finisher and passer -- he doesn't have to be an elite pull-up guy. All he needs to be is timely and competent. He's been that this season. When he's firing on all cylinders -- as he has been during this recent stretch -- there really isn't much you can do with him if you're an opposing defense.

I have a take.

Allow him to hover around the free-throw line, and he'll junk up everything you want to do. Timely digs on drives; playing between two when there's a trap elsewhere; calculated gambles against unsuspecting post-up threats. Nobody's safe when Butler is around.

The dynamic with Butler and Adebayo is an interesting one. They wreck worlds together, with the Heat defending at a top-five rate when they share the floor. Running actions against those two are rarely fruitful endeavors.

Adebayo rightfully is praised for his defensive versatility. Having a 5 that can not only hold his own against perimeter players, but can legitimately force stops against them is insanely valuable. What gets a little overlooked is the strain that places on the smaller players on the court.

If a big (Adebayo) is on a small, logic dictates that a small is on a big somewhere. Butler's able to hold his own against centers. He's a strong dude, but he's also a smart dude; he consistently positions himself in a way that: 1) Makes entry passes tough to make and 2) It's difficult for larger players to get comfortable.

Butler isn't a shot-blocker, but his combination of strength, positioning and hand speed makes big-on-small post-ups less automatic than they should be.

Of course, Butler remains a strong perimeter defender. We're treated to less of the bleep-it-he's-mine-for-40-minutes assignments by virtue of Miami's switching principles. That doesn't mean he can't fight over screens and make life difficult for top-tier initiators.

The priorities have shifted, not just for Butler in Miami, but for what it means to be an elite defender. The fact that Butler is able to toggle between being a free safety, punching up on the block and funneling elite scorers into a swarm of arms is why he's one of the most impactful defenders in the sport.

To that point: the Heat's defense is roughly five points stingier with Butler on the floor, per PBP Stats.

When you think of who the Heat are, or what they've struggled to consistently be this season, what comes to mind?

A grind-it-out group with a focus on meticulous decision-making. Aggressiveness, versatility, toughness.

The team is shaped in his image, down to the culture-filled comments in the postgame presser. It should come as no surprise that, as Butler has been more available, the team is looking more like who they want to be.

And that team isn't just one that nobody wants to play; that's a team that could beat just about anyone four times.