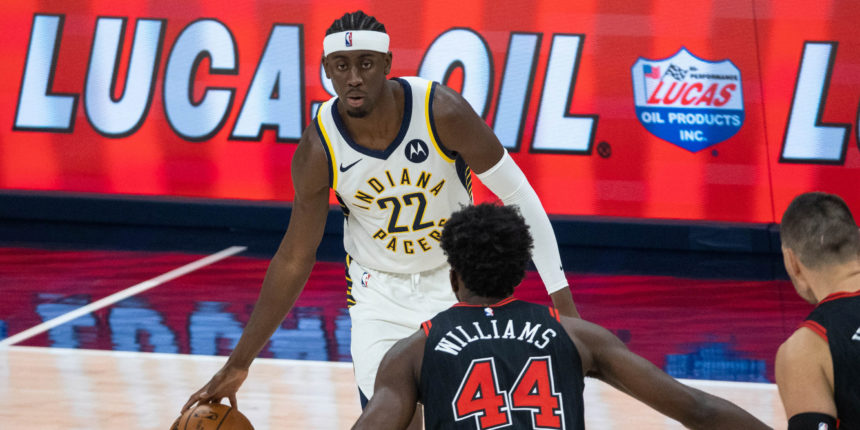 Pacers’ Caris LeVert has not lost a single step after surgery

With so many NBA players suffering injuries at the hands of the unforgiving basketball gods, it’s high time we bring up the heartwarming return of one player who had an unclear future as recent as January.

After missing two months of action following surgery to treat renal cell carcinoma of his left kidney, Caris LeVert has been back on the court for the past month with his new Indiana Pacers team, and is starting to look like his usual self.

Thus far in April, LeVert is averaging 21.6 points, 5.3 rebounds and 5.0 assists in over 34 minutes per game. On nearly 17 attempts a contest, he’s making 49.1% of his tries. Though he’s been struggling from long distance (an area of his game that is still developing), we’ve seen no signs of hesitation from the 26-year-old wing off the dribble. He’s getting to the line more and more, as evidenced by his 11-for-13 night at the charity stripe Tuesday against the Los Angeles Clippers.

LeVert is feasting as a pick-and-roll ball-handler that gets to the cup. According to InStat, on layups in those situations, he is scoring 1.88 points per possession over the past six games. Oftentimes, the big (Domantas Sabonis, Myles Turner, Goga Bitadze) is setting a pick in the high post, which frees LeVert to make a hesitation move and dribble before accelerating at an angle inside for the easy two.

As a passer, he’s already established a rapport with both Sabonis and Malcolm Brogdon in the two-man game. Per NBA.com, he’s recorded 21 and 11 assists to each, respectively, and has been on the receiving end of 19 and 13 helpers from those two, to boot.

In isolation situations, he’s more than held his own as well. In that same six-game span, LeVert is averaging 1.09 points per possession on isos, a significantly higher number than his 0.81 on the season. Studying the film, when LeVert starts with the ball out on the perimeter, he is able to execute some sensational moves to get to his spots (crossovers, behind-the-backs, between-the-legs -- you name it). When he sees a mismatch, he’s getting past guys using his speed and length. If there’s a wing similar to his size guarding him, LeVert is using a soft-dribble-and-pull method from deep, which has had mixed results -- but when he gets to the short turnaround in that 10-foot-or-less area, that’s when he causes real problems. Just ask the Memphis Grizzlies, whom LeVert put away with a floater in that range just three nights ago.

Pacers get a huge offensive rebound and Caris LeVert capitalizes. Pacers up 3 with 31 seconds to go: pic.twitter.com/ykNrRlW6hk

Defensively, he’s playing solid on the ball and staying in front of (and with) his assignments. Pairing him with Edmond Sumner and/or Jeremy Lamb has resulted in Indiana’s best efforts on that side of the floor. Justin Holiday has played well with LeVert, too, as far as the perimeter wing combinations on the team go.

While this is admittedly a rather small sample size to go off of, this isn't the first time we have seen LeVert produce at a high level and show who he can be. He had some dazzling performances with the Brooklyn Nets. He’s got All-Star potential as a scoring, playmaking swingman in this league. The Pacers are clearly benefiting, having won four of their last six with a three-game winning streak sandwiched in.

Given what he went through, the fact that we’re even talking about LeVert playing the game at all is a blessing.

The performances that have followed are just the cherry on top.