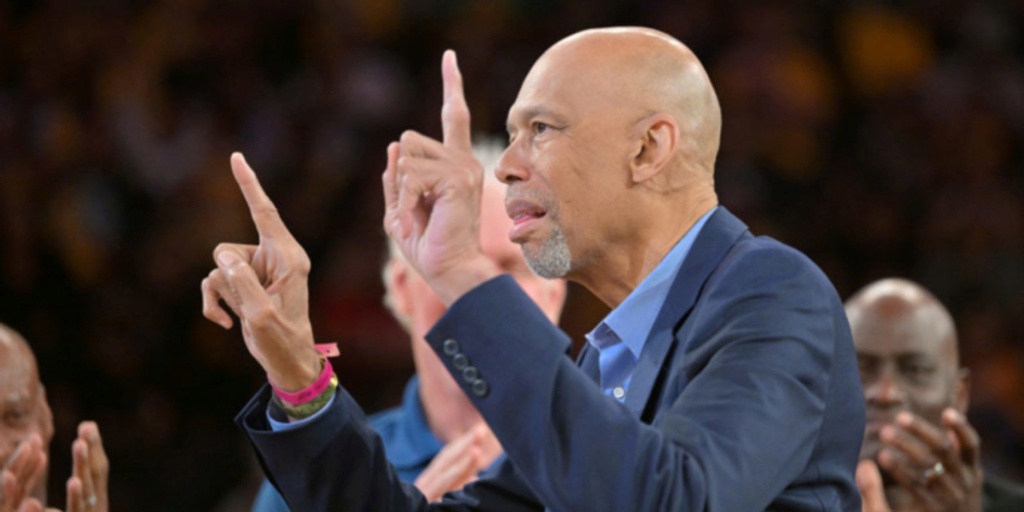 On June 29, 2021, the NBA announced that Carmelo Anthony was the inaugural recipient of the Kareem Abdul-Jabbar Social Justice Champion award. Anthony was selected in recognition of his years of mentorship for young NBA players, his activism through the Carmelo Anthony Foundation and his most recent partnership with Chris Paul and Dwyane Wade to create the Social Change Fund.

Last month, the NBA formally unveiled the Kareem Abdul-Jabbar Trophy at Crypto.com Arena in Los Angeles. NBA Deputy Commissioner Mark Tatum was on the scene to present the new trophy to Anthony and recognize Kareem’s mission to fight for social justice.

“We created the Kareem Abdul-Jabbar Social Champion award last season in recognition of Kareem’s leadership, his unwavering commitment to equality and his life-long pursuit of social justice,” Tatum said. “Kareem is one of the greatest players in NBA history, if not the greatest player in NBA history, but he’s also one of our greatest trailblazers, not just on the court but more importantly off the court. He set the standard for generations of athletes — not just basketball players, but athletes — who have dedicated their lives to using their voice to advocate for meaningful change to uplift marginalized people.”

Abdul-Jabbar also spoke at the event, noting how proud he is that the NBA has made social justice
activism a core part of the league’s identity.

“There aren’t many sports organizations that would make social justice not just a priority, but a mission,” Abdul-Jabbar said. “That’s why I am so proud to have been part of the NBA for so much of my life. They have proven themselves to be dedicated to providing the highest level of athletic competition, while also pledging to provide the highest level of social commitment.”

When BasketballNews.com asked about the criteria for winning the Kareem Abdul-Jabbar Social Justice Champion award, he thought for a moment.

Abdul-Jabbar has advocated for social change during periods of heightened political unrest, such as the  Civil Rights Movement and over the last few years with the protests against excessive force from law enforcement against members of the Black community.

“We can’t just arbitrarily remove people’s avenues that they have when they protest,” Abdul-Jabbar told BasketballNews.com. “It’s not a thing that’s going to be here all the time, where we’re protesting. But sometimes you have to stop and consider what’s going down, that there needs to be a change with what’s going down.”

Tatum spoke about how the NBA evaluates and determines the winner of the Kareem Abdul-Jabbar Social Justice Champion award.

“One of the things that we look at is a player’s commitment, how long they’ve been doing it,
what are the results,” Tatum told BasketballNews.com. “Have they been able to really put
resources behind it and deliver results in the areas that they are focused on here?"

"It's because of how long he’s been doing it, his commitment to it, his passion for it," Tatum said. "He's been successful in areas of voting access, criminal justice reform and representation in government. Because of the results that he’s shown for it through his organization, he became the inaugural winner of the award.”

Abdul-Jabbar acknowledged that pushing for social justice and change can be difficult. When asked about the political climate over the last few years and how that can come into conflict with the business of the NBA (such as when the Milwaukee Bucks refused to take the floor during the 2020 NBA Playoffs after charges were not brought against the officer who shot Jacob Blake), Tatum reiterated the NBA’s firm stance on pushing for social progress and supporting its players.

“We have a long history as a league, the league and our players, of standing up for social justice and fighting for equality,” Tatum said. “And we always support our players when they speak out about things that are important to them. So in that particular case, as we saw, we supported our players and we listened to them. It really is a partnership where we figured out the best way forward and the best approach. Obviously, there were a lot of things that came out of that in terms of fighting for voting, and I know the Milwaukee Bucks, for example, were on with the legislature of not only the city government but state government as well to try to enact change in these areas.

"Again, it’s a partnership between the players and us. We always support their right to say what they want to say and to work on the things they want to work on because it’s consistent with our values.”

The NBA is expected to announce this year's finalists for the Kareem Abdul-Jabbar Social Justice Champion award at some point during the 2022 NBA Playoffs.