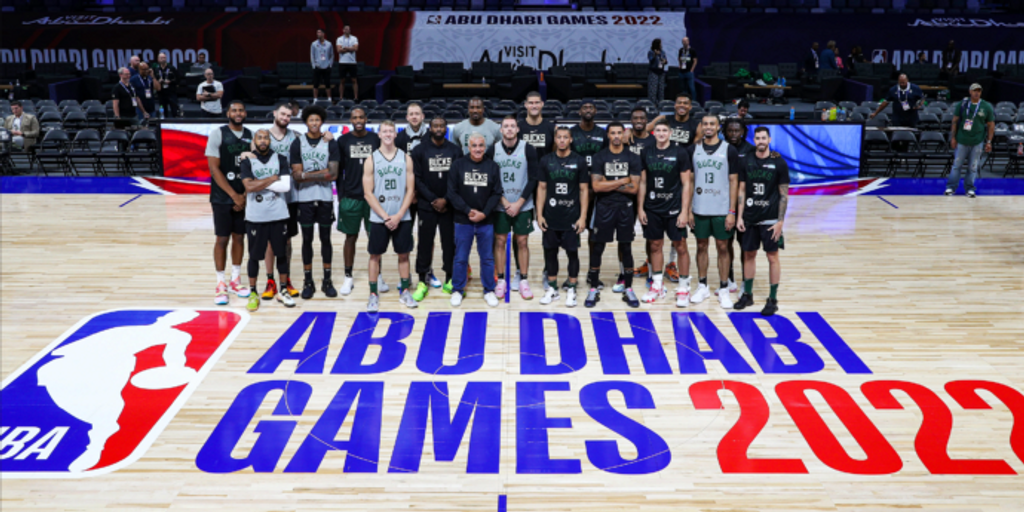 Last week, continuing its international tour around the globe, the NBA finished its first visit to the United Arab Emirates and the Arabian Gulf for the 2022 Abu Dhabi Games. Participating in the event were the Atlanta Hawks and Milwaukee Bucks, with star performances highlighting the competition at Etihad Arena on Yas Island. The Hawks came out on top in both games, with 123-113 and 118-109 victories.

Despite it being preseason, Atlanta and Milwaukee allowed their regular rotations to play and put on a show. New Hawks addition Dejounte Murray dazzled in his preseason debut with a 25-point, 9-assist, 8-rebound outing, while former MVP Giannis Antetokounmpo answered with 19 points and 7 boards in Game 1. Two nights later, Trae Young dropped 31 points and 6 assists on a sizzling 11-for-15 from the field, including a 7-for-9 mark from beyond the arc in the first half of Game 2.

ice Trae went CRYOGENIC in the first half at #NBAinAbuDhabi:

However, aside from what happened on the court, the real story is that the NBA continues to reach further into different countries as basketball grows more and more in popularity.

To learn more about the inaugural Abu Dhabi Games and the league's efforts to expand its audience worldwide, BasketballNews.com spoke with the NBA's vice president of global strategy and innovation Samantha Engelhardt.

First off, how nice is it for the league to be back on a global schedule following the pandemic? Logistically, how difficult was that to handle/schedule, and then, get back to a routine of working things out again?

Samantha Engelhardt: "We’re excited that we were able to resume playing Global Games for the first time in more than two years. Playing games overseas is an important part of our year-round efforts to engage our passionate international fans and grow the game around the world. Planning for these games and the surrounding events is a highly collaborative process across league and team employees, partners and our regional offices.

"In both Japan and Abu Dhabi, we hosted four sold-out games, interactive fan events, NBA Cares community outreach initiatives and youth development programming that reached thousands of people. We’re very pleased with the reception from fans in both markets and look forward to continuing that positive momentum at our regular-season games in Mexico City and Paris."

What has been the key to building a worldwide fan base over all these years?

Engelhardt: "There are a number of factors. This season marks 30 years since the "Dream Team" captivated a global audience with their performance at the Olympics in Barcelona. It’s remarkable to see how that team inspired generations of fans and players around the world. We’re fortunate that in the years since, so many players from outside the U.S. have made an impact in the NBA and WNBA.

"As far as our efforts, we have a three-pronged strategy to help grow the game of basketball globally: Grassroots basketball development (creating opportunities for boys and girls to play the game), making NBA basketball more accessible to international fans on the devices and platforms they use most, and, as in the case of Global Games, bringing the NBA experience to fans around the world through live games, interactive fan events and authentic merchandise."

Why is this matter important to the league? And how much has the international influx of talent in the NBA furthered this objective to reach fans outside of the USA?

Engelhardt: "Our mission is to inspire and connect people everywhere through the power of basketball. Ninety-nine percent of NBA fans will never enter an NBA arena, and they consume our game entirely through some form of technology. It’s very important that we do everything we can to reach and engage those fans with the content and experiences they want, which is why we just launched a reimagined NBA App that does exactly that.

"And the level of international talent in the league has been critical to basketball and the NBA’s continued growth around the world. This will be the ninth consecutive season we’ve had at least 100 international players in the league. And it’s not just the quantity, but the quality. International players are having as significant an impact on the NBA as they ever have. Two international players — Serbia’s Nikola Jokić and Greece’s Giannis Antetokounmpo — have won the last four MVP awards. All of these players drive interest and inspire people in their home countries and beyond."

Giannis on playing basketball around the globe 🌍 pic.twitter.com/8y67f5Bvlf

Seeing the response before and during the games in Abu Dhabi — the first time the league has gone there — it was deafening. How did the opportunity to go there come about?

Engelhardt: "Bringing live NBA games to different regions is a vital part of our efforts to grow basketball around the world. Following the games in Abu Dhabi, we’ve now played in virtually every region of the world.

"As far as Abu Dhabi specifically, it’s a city with extensive experience hosting world-class sporting events, and we see an opportunity to expand the NBA’s presence in a region with a growing number of basketball fans. And our games there are built on the NBA’s decades-long history to grow basketball in the UAE and across the Middle East through live games distribution and grassroots development. We believe bringing games and the surrounding community events to Abu Dhabi will serve as a catalyst for basketball’s continued growth throughout the region."

To follow up on that, how did the NBA react to the response from those in attendance? Do you feel you'll be back there again next season?

Engelhardt: "The response from the fans in Abu Dhabi was really special, particularly for our first games in the market. In addition to two sold-out games, our NBA District fan event welcomed thousands of people throughout the week of the games, our basketball development programming reached more than 2,000 boys, girls, coaches and basketball stakeholders from across the region, and we opened a new NBA Store at Yas Mall that will serve as a year-round destination for fans based locally and visiting from abroad. The results were really encouraging.

"Our Arabic-language Instagram account (@NBAArabic) more than doubled their collective followers during the week of the games, and our social content around the games delivered more than 95 million views. We’re pleased with the success of the week’s activities and believe these games will continue as a fixture in our calendar."

How did the teams' players, coaches and executives feel about the trip? Anybody who has the travel bug has to enjoy exploring new places.

Engelhardt: "Both teams had a great experience; we’ve received nothing but positive feedback from everyone involved. It was many of their first time in Abu Dhabi and the broader region, and in addition to exploring a new place and culture, they were able to bond as a team heading into the season. I think for them, to see Bucks and Hawks jerseys in the stands at Etihad Arena was another reminder that there are NBA fans all over the world."

appreciate you, Abu Dhabi!#NBAinAbuDhabi is live on NBA TV and the NBA App.

Trae Young, Giannis Antetokounmpo and Dejounte Murray are marquee names that don't always suit up for long in the preseason. The fact that the legitimate rotations of these teams played competitively despite being an exhibition certainly was a bonus for those fans to see the "real thing" as well. Would you agree?

Engelhardt: "Absolutely. It was great to see Trae, Giannis and Dejounte come out and put on some amazing performances for the fans, who came from 59 different countries to see them. Not only them, but I thought all of the players’ efforts led to two competitive games that were exciting for the fans. I think both teams appreciated the opportunity to be part of history, and their play on the court reflected that."

So you've been to Japan and Abu Dhabi, and will go to Mexico City and Paris as well in the next few months during the regular season. What places are next?

Engelhardt: We look at several factors when evaluating where to play Global Games. It's the availability and capacity of arenas; cities and countries that have an affinity for, or have a growing interest in basketball; and destinations that interest our teams and players. We don’t have any news to share at the moment, but there are a number of markets both where we’ve played before and where we haven’t played before that we’d love to bring live games to."

A simple question: What is the NBA's end game and end goal as a league when it comes to globalizing basketball? It seems like these efforts will continue getting stronger with each season/year.

Engelhardt: "The goal is to continue to grow the game and our fan base around the world. NBA games reach fans in more than 200 countries and territories, and nearly 70% of our social media followers are from outside the U.S. We know that the future of sports will be defined by technology’s ability to bring the game directly to fans on their preferred device — which is especially true about reaching fans outside of North America. So we have to continue to do everything we can to reach and engage our passionate and growing international fanbase.

"That’s why things like the re-imagined NBA App are so important. Our fans expect a personalized, customizable, seamless user experience across every touchpoint they have with our leagues. We have ambitious goals for our international growth efforts and are excited about the enormous opportunities ahead for basketball and the NBA globally."