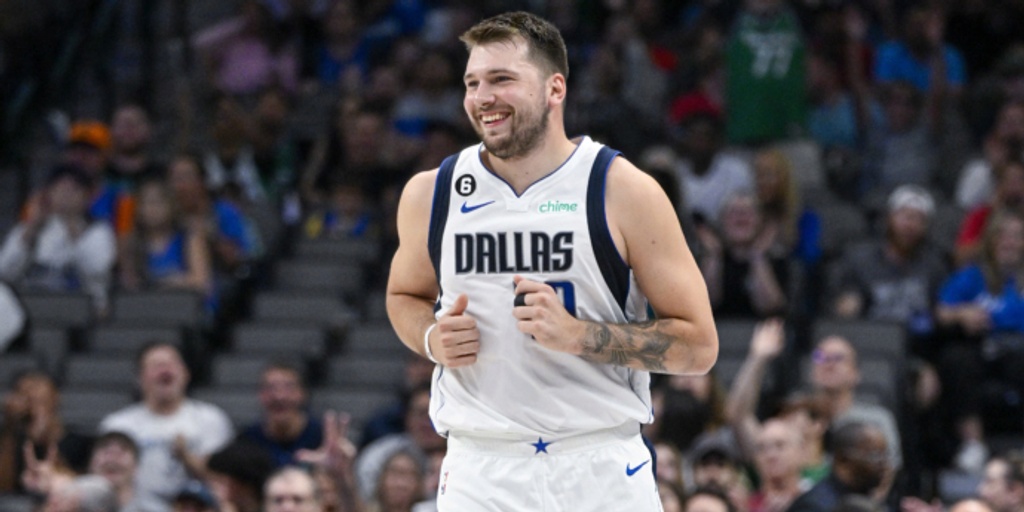 DALLAS (AP) — Luka Doncic has a new sidekick — but not a co-star — as the Dallas Mavericks try to build on their first deep playoff run in a decade.

Spencer Dinwiddie, a midseason trade acquisition before the Mavs reached the Western Conference finals, joins the starting lineup after Jalen Brunson chose to run his own show with the New York Knicks.

The return of healthy stars should be a boost for several West contenders, and defending champ Golden State still has Stephen Curry and company after beating Dallas in five games in the conference finals.

The Mavs are sticking with their formula of Doncic and a host of complementary pieces to go with the defensive-minded approach of coach Jason Kidd, who changed that culture quickly in his first season.

Doncic said there were “no expectations” — just the same goal.

“Always the goal is the same for me, for the team,” the three-time All-Star said. “We’re trying to win the championship. That’s the only goal we have. That’s what we’re going to work for.”

The biggest offseason move for second-year general manager Nico Harrison was a trade with Houston for Christian Wood. Turns out that was just the start of revamping the frontcourt.

The plan for Wood to start changed when free agent center JaVale McGee agreed to a second stint with the Mavs. The three-time champ (two with the Warriors, one with the Lakers) spent last season with top-seeded Phoenix, which was blown out by the Mavs at home in Game 7 in the second round. Dallas opens this season at the Suns on Oct. 19.

At media day before the start of training camp, Wood said that was the first he had heard of who was starting. Nor did he seem too concerned about it.

“I'm motivated either way, off the bench or starting,” said Wood, a one-time journeyman who blossomed into a 20-point scorer with the Rockets before they wanted to clear the way for younger draft picks.

Brunson played a huge role in Dallas' first-round victory over Utah when Doncic missed the first three games. During the regular season, Dinwiddie showed he could be a scorer with Doncic out.

Dinwiddie is going into his first full season with the Mavs and is almost two years removed from surgery for a partially torn ACL. Tim Hardaway Jr. returns after missing most of last season with a broken foot.

“I think what made last year’s team so special was the chemistry it had and how the sum of its parts became better than any individual talent,” Dinwiddie said. “We should be better on paper, but it comes down to how we mesh as a group.”

Doncic is the FanDuel SportsBook preseason betting favorite for MVP going into his fifth season — and first with the $215 million, five-year rookie supermax extension he signed in the summer of 2021.

The 23-year-old Slovenian has become an international star while also leading his national team. Slovenia reached the semifinals of its first-ever Olympics in Tokyo in 2021 before an upset in the quarterfinals of EuroBasket this summer.

The past four MVP awards have gone to two other Europeans: Denver's Nikola Jokic (Serbia) the past two years and Giannis Antetokounmpo (Greece) the two before that.

“To be an MVP of his league, not a lot of people can say,” said Doncic, who was third in the NBA in scoring and fifth in assists last season. “It's a long progress. Hopefully one day I can win it.”

The Mavericks traded into the second round of the draft this past summer to get G League Ignite player Jaden Hardy, who projected as a potential lottery pick after a one-and-done college career before bypassing that route.

Playing time might be an issue in a deep backcourt that also includes Josh Green, who had the fourth-year option on his rookie contract picked up Tuesday, and Frank Ntilikina. But Dallas will have an interesting option if Hardy shows an early ability to score.

“He's got a little wiggle to his game,” Dinwiddie said. “He had a couple of days where he was getting some buckets.”

Dwight Powell probably will have to get used to coming off the bench again after starting a career-high 71 games last season and playing all 82. Maxi Kleber has a $33 million, three-year extension to take into his sixth season, all with Dallas.