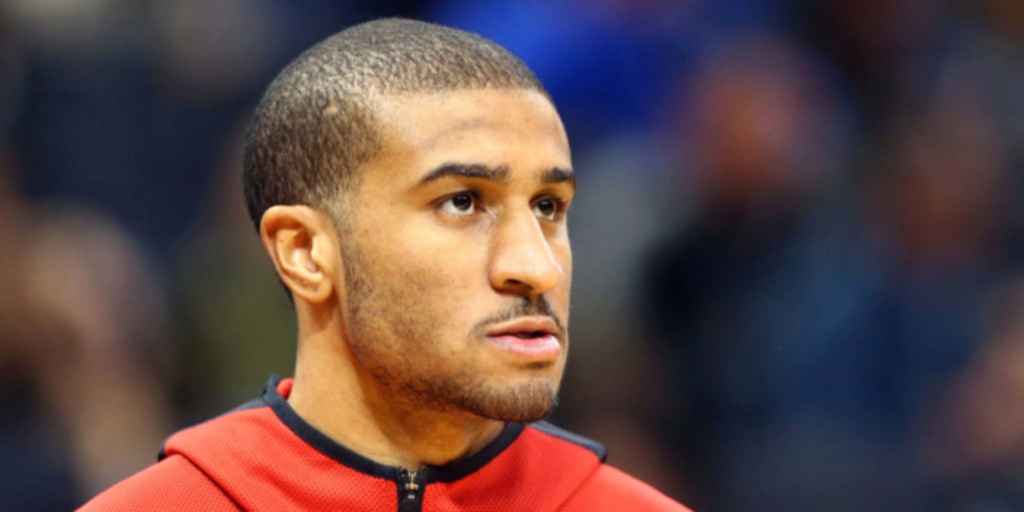 Gary Payton II on growing up in father's shadow: 'We have two different paths'

The empty stillness of AdventHealth Arena allows the ESPN+ microphones to pick up every squeak of a sneaker, every play called, and every foul argued. Here in the G League bubble, the Raptors 905 will attempt to hand the Delaware Blue Coats just their second loss of the season, in a rivalry that extends to their parent clubs, the Toronto Raptors and the Philadelphia 76ers.

The season may be condensed, but the action is not. The 905 have already seen trades, injuries, call-ups, call-downs and new signings. Eight games into the season, they are sitting just above .500, and now, against the first-place Blue Coats, they will be without arguably their most impactful player.

On the bench or on the court, it isn’t unusual to hear Gary Payton II coaching and cheering for his team. Sidelined with a sprained finger and in a Bobby Boucher jersey from The Waterboy, his voice booms as he runs alongside the court. A new addition to an ever-changing G League roster, Payton’s impact was felt immediately by his teammates.

“He’s one of those teammates where he is going to have an impact on the game in a variety of ways,” said fellow 905 guard Matt Morgan. "He is extremely vocal, he always says what we need to hear, and wants to win by any means necessary. He’s the best defender I’ve ever played with.”

Payton’s defensive abilities were always going to be scrutinized and spotlighted. His father, Gary Payton, did not earn the nickname “The Glove” in an era of defense-heavy basketball without reason. The comparison between the father and son was one that Payton initially resented in his younger days.

“I think a lot of kids that are in my position (with) their father or mother (and) who they are or who they’ve been, you get compared to them. I think it’s just natural, it’s just going to happen,” the 28-year-old admitted to BasketballNews.com. “You’re probably going to be compared throughout your life. Growing up it was a problem for me, I just didn’t know how to deal with it, but as I got older and wiser I matured and I realized that he had his route and I have mine, and don’t worry about what people are going to try to compare you to, because we have two different routes in two different eras. So I stopped caring about that some time ago.”

The younger Payton’s career has not been as positioned.

After going undrafted in 2016, the ebbs and flows of Payton’s career better resemble the steep gradients of a rapid river; starting, stopping, crashing and calming with no clear stability in sight.

“In the beginning of my career, I probably did have some doubts and some adversity with it,” Payton revealed about his professional basketball journey. "But just looking back before even coming to the league, all the work I put in towards getting here in the short time frame that I did it in. It was like, 'Why quit now?' So I just stuck it out.”

A self-professed homebody, Payton admits that being with four different NBA teams and five different G League teams does wear on him, but understands that the destination is well worth the journey.

“I’m fine adapting, but it is frustrating at times," Payton said. "You want to be able to call one place home, and know that you’re going to be there for a few years and not have to worry about your next move and whatnot. That’s a little frustrating, but besides that, everything else is pretty much just grind it out and take it how it comes.”

Beloved by his teammates, Payton’s unexpectedly approachable nature when the cameras aren’t rolling has helped him to develop and maintain relationships that far exceed his time with each team he has played with.

“It’s unfortunate, but that’s where you create that bond and that brotherhood, and that lasts longer than basketball.” the ever-positive Payton said. “All the guys that I’ve (played) with, and everywhere I’ve been, I still talk to guys to this day. There are a lot of guys in this bubble, coaches, players down here that I still talk to on the daily, including while we’re in here in the bubble, so the brothership part of it, it’s more than basketball and that’s not going to change.”

Payton’s “grind it out” mantra is one that inspires his colleagues in the G League who are all vying for the attention and permanence of an NBA team. Still, in a league where players are anxious for their big break, and may overperform, Payton remains a team-first, unselfish player. He understands that the big clubs aren’t always looking for the best scorer or the flashiest handles.

"And if that means sitting down and getting steals and going to get layups, then that’s what I’m doing. If it’s to set screens for my teammates and get my shooters open, or if I have to play big and guard the post, whatever I have to do, mix around in the court, I think that's what makes me stand out so much is that I can do a lot of versatile things, a lot of different things on the court for my team, and it helps develop everything else for my teammates. So whatever I need to do for my team I’m going to do it. If I need to run the point, I can. If I have to play off the ball, I think I do a very good job playing off the ball and finding little gaps and getting open without it.”

It isn’t easy to play defense when you share a name with arguably the greatest defensive player of all time, but defensive abilities that Payton learned from his father pale in comparison to the intangibles he brings to the game.

His career may be measured in stutter-steps, but he has spent too much time on the voyage from JUCO to the NBA to give up now. Too skilled to be passed up, the 28-year-old will find his home in the NBA.

And when that time comes, Gary Payton II will be ready, and yelling.