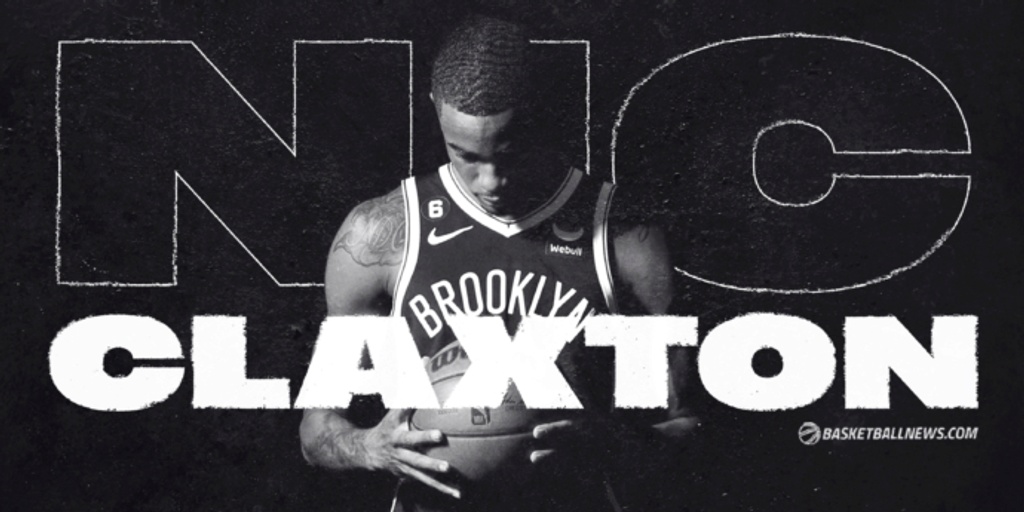 On Monday morning after the holiday weekend, Kevin Durant admitted that he has a soft spot for young bigs who mature, get paid and become household names. Just like another bright center the Brooklyn Nets had when he first got to the organization, Nic Claxton has made huge strides that are on display in each game as of late.

“Just gaining more confidence. He's always been a confident player. But you couple that confidence with (the) understanding of the game and trusting in your work, I think that's the reason why he's here,” Durant said after the Nets’ ninth straight win in Cleveland. “You know, the coaching staff (has) been patient with his development since he got drafted, and he's going out there and wanting to be great, and I think that's a tough journey to being relied upon every night, being consistent and then, just that longevity.

Nic Claxton had one of the best games of his career last night ⭐️ pic.twitter.com/mR2i8X0hwi

Sporting a fresh look, and the second-highest win share total and Box Plus-Minus on the Nets, Claxton is averaging a career-high 11.8 points and 8.4 rebounds per contest.

Whether it's making the two biggest stops down the stretch on the road against a dominant Cavaliers team, finishing at an elite level or growing his offensive game in different ways as he showed against Milwaukee, Claxton is quickly becoming one of the most effective centers in the NBA.

“He’s a big piece for us and we need him every night,” Kyrie Irving stated.

“We just want him to be confident,” Royce O’Neale added. “Myself, just giving him that confidence and telling him to play on both ends. He can be dominant on both ends, both ways, and just him being that confident and then, taking the challenge of whoever he's guarding, doing whatever we need him to do.”

Defensively, Claxton is one of the stingiest switch bigs in the league. He stays in front, has plenty of length and can recover with the best of them. According to NBA.com, the fourth-year center has seen 79 isolations  — the most in the league. Claxton is only allowing 0.81 points per possession in those scenarios, trailing only Evan Mobley and Clint Capela.

That — combined with his 2.3 blocks a night (double what he produced last season and ranking second-best in the league) — has spearheaded Brooklyn’s efforts to lock-in on D as of late.

“That's kind of been my staple since I've been in the league,” Claxton told Basketball News prior to Monday morning’s shootaround in Cleveland. “And the more you guard guys, the more you pick up on tendencies and see who wants to drive, who wants to shoot, and it's just experience. Experience is the best teacher. And just, buckling down every possession and not taking any possession for granted.”

But, as he said, the 23-year-old has always had a knack for stifling the competition. It’s what Claxton is doing to contribute on the offensive side of the ball that complements that story. For one, he boasts the NBA’s top field-goal percentage and effective field goal percentage by a wide margin at 73.8%. Next on the list is Rudy Gobert over seven percentage points behind him (66.4%).

Claxton’s efficiency is off the charts. He’s doing it with cuts (1.35 PPP), running the floor on fast breaks (1.34 PPP) and rolling hard with finishes through contact (1.22 PPP).

“It's just the work that I put in over the offseason, getting stronger, working on my body, my confidence, and my teammates finding me. Just me being aggressive and finishing around the rim, that's really what I've been doing. That's what I just gotta keep going,” Claxton said. “I mean I'm stronger now, more confident now. (I’m) getting a lot of easy looks. And the shots that I do take that are contested, I mean, I like myself to finish over or around anybody.”

Going further into the numbers, the Georgia Bulldog alum is scoring 140.4 points per 100 shot attempts — a figure that ranks in the 94th percentile, per Cleaning The Glass. The Nets’ eFG% is a sizzling 59.3% with him on the floor (which ranks in the 97th percentile).

“Just always being a threat out there,” Claxton explained of his approach on offense and the success that’s come with it. “A lot of times, teams (are) not really guarding me real honest. They're shifting a lot trying to stop our main guys, so just making sure I'm a threat at all times on the court and staying aggressive.

“Our transition game, it's definitely the best that it's been since I've been here, and we've got five guys that can get out in transition and score and great passers. So just asserting myself in different ways."

The top Mobile Bigs in our On-Ball Defense metric:

Above all else, Claxton’s been essential for a Brooklyn team that struggles to secure boards. He’ll do plenty of damage when he gets a putback opportunity too (1.51 PPP).

“I'm trying to get as many rebounds as I can. I know that's an area where sometimes we struggle, so I take it upon myself to crash the glass offensively and defensively,” Claxton said.

Don’t look now, but at 22-12, the Nets are the hottest squad in the NBA. They’ve ripped off nine-straight wins, including two over contending Eastern Conference teams. It’s the longest winning streak the franchise has had since 2006. Brooklyn head coach Jacque Vaughn has amassed a league-best 20-7 record since taking over on Nov. 1, and has this group laser-focused on the task at hand.

“We're definitely taking steps in the right direction. You can never be satisfied, but we had a rough start to the season. But these last several games have been heading in the right direction,” Claxton said of the Nets, who have lost just one contest in December. “We've just gotta take it game-by-game and worry about us. The East is definitely loaded, but we've just gotta control what we can control and keep getting better as a team.

“This is a different swagger, different energy. I think we're really hanging our hat on defense. Our defensive principles have been really solid, and that's something that just travels no matter where you are. I think us really focusing on defense, and obviously, we've got some of the most talented players and best shooters in the world.”

Vaughn’s been around from the onset of Claxton’s pro career, as an assistant and as a head coach. A big believer in his capabilities, he admits that Claxton becoming the player he is now had to be a two-way street coming into this season.

“It's okay to remind a player of how important they are for the organization's success and how that player has to put in the work to help us, and to help himself get to that position,” Vaughn stated. “And so, I thought Nic always saw how good he could be, but the steps of getting there (is a different challenge). And so, now he's taking those steps and he's getting rewarded for it.”

Stronger, smarter and as self-assured as he’s been in his four NBA seasons, Nic Claxton took it upon himself to improve in all facets. Alongside the incredible firepower of Durant and Irving, and a rejuvenated Ben Simmons, he's undoubtedly been a serious reason as to why the Nets have been able to move full speed ahead.

“A lot of growth. I think the biggest part is being available every night. That's something that can be overlooked at this stage of a person's career, is availability. So he's showing that he can start and produce on a nightly basis against starters, which is a tough task,” Vaughn said.