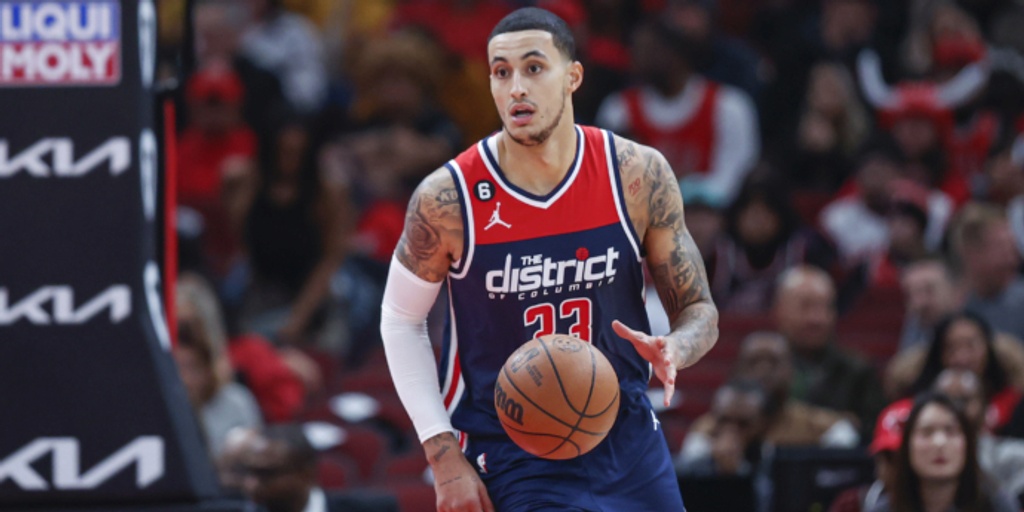 It was mostly fine a month ago.

Through games played on Nov. 27, the Washington Wizards found themselves at .500 (10-10). Back up a week, and a shiny 10-7 record — including a six-wins-in-seven-games stretch — would be staring at you. Behind a surprisingly stout defense (sixth in defensive rating through Nov. 20), the Wizards were racking up wins and hoping to put together their first winning season since the 2017-18 campaign (43-39).

It's probably safe to say that won't be happening now.

The defense has fallen off a cliff — they've posted a 117.8 DRTG (No. 27) since Nov. 21, and rank 24th overall this year — and the offense has never come together. Having Bradley Beal and Kristaps Porzingis in and out of the lineup certainly hasn't helped matters on either end of the floor.

Because the slide has come so quickly and aggressively, it's fair to expect some moves to be made before February's trade deadline. Per Marc Stein of Substack, the Wizards have already attempted to acquire Phoenix Suns forward Jae Crowder in exchange for a package headlined by fourth-year forward Rui Hachimura, to which the Suns reportedly declined.

But if there's anyone to keep an eye on, it's Kyle Kuzma.

He's been the metronome for this Wizards group, averaging a career-high 21.8 points per game on 56.4% True Shooting (also a career-high) while playing in all but one game this season. It's been a remarkable sequel to last season's campaign (17.1 points, 8.5 rebounds and 3.5 assists), where he firmly established himself as one of the best young two-way forwards in basketball.

It's also a timely bit of ascension for Kuzma.

He's in the last guaranteed year of the three-year, $40 million extension he signed back in 2020; he has a $13 million player option for next season, but short of an accounting error or attack on the power grid, there's no way he isn't declining it and hitting the market. To that point, Kuzma himself has stated his intention to opt out for a new deal.

On Monday, Stein reported that league executives feel that Kuzma is "getable" ahead of the trade deadline.

Considering Kuzma's upcoming free agency and apparent (if not obvious) desire to land in a big(ger) market next season, it's hard to argue against moving Kuzma before the deadline approaches. There's always room for a sign-and-trade over the offseason, though I'm not sure the Wizards should be putting themselves against a hard cap. (They absolutely should not.)

With that said, let's take a look at Kuzma's season and who could benefit the most by bringing him in.

The bucket-getting brings Kuzma to the dance, particularly inside the arc. His blend of strength, touch and footwork allows him to generate looks almost whenever he pleases. Watching him toggle between bullying smaller defenders and simply shooting over them inside the free-throw line has been a quiet joy of tapping into Wizards games.

Mid-post and in is where he does a majority of his work. Kuzma has converted 54.5% of his shots between 4-to-10 feet this season, per Second Spectrum. Of the 33 players that have taken at least 100 shots within that range, Kuzma ranks fifth in efficiency — and only trails Luka Doncic (58.3% FG, third) among non-bigs.

Kuzma's ability to drive — the Wizards are generating 1.09 points per possession (PPP) on trips featuring a Kuzma drive this season, one of the best high-volume marks in the NBA — has continued to open up passing windows for him.

Quietly, he's become a slick interior passer. He's gotten comfortable making laydown or wrap-around passes when drawing a second defender. His willingness to throw lobs — and the combination of touch and placement he has on them — is impressive for a guy that doesn't have a true point-forward rep... at least, not yet.

Off the ball, Kumza can't be completely ignored (more on that later). He's a heady cutter who's able to take advantage of airhead defenders. He's also more than willing to mix things up on the offensive glass, often tracking down his own missed shots in addition to cleaning up his teammates' messes.

Kuzma isn't just a one-trick pony though. He digs his heels in defensively as well. He's comfortable against both forward spots, though better against 4s. He moves well enough to switch onto pure wings in a pinch. And though I'd hesitate to play him as a small-ball 5 for extended stretches, his strength and rebounding prowess at least allows you to think about it — depending on what the rest of your personnel looks like.

Kuzma has grown as a passer, but he's more reactive than proactive. There isn't a ton of manipulation present. Even with the rise of ball-screen usage as of late — he's running nearly 11 per 100 possessions since Thanksgiving — he's taking a shot on just under 60% of those plays, per Second Spectrum. Making a move for him to be your second option is probably too rich.

The real question mark for Kuzma is his outside shot. He's at career-high volume right now (7.5) while only converting 34.3% of his triples. Of those 7.5 attempts a night, 5.7 of them (76%) are of the catch-and-shoot variety; he's only nailed 35.4% of those, below the threshold needed for teams to think twice about helping off of him.

In short: Kuzma's been a streaky shooter off the catch, and a flat-out poor one — 26.1% on 402 attempts — when taking them off the bounce. Considering his poor three-point track record in the postseason thus far (28.3% across 27 games), it's fair for contenders to worry about how defenses will treat him, and how he'll respond.

If you need a 4 to put his head down and soak up some usage, keep the chains moving within a possession and defend forwards on the other end, Kuzma should be near (or at) the top of your list. The acquiring team likely has to be prepared to pay Kuzma at least $20 million per year on his next deal, which could limit the pool a bit. Still, contenders should be knocking down the Wizards' door with offers.

It's fitting that the Wizards and Suns have already had discussions aroud Crowder; Phoenix should absolutely try their hands at a Kuzma pursuit. Considering Chris Paul's decline as a rim threat and interior scorer, adding Kuzma to the fray could be a necessary boost to their attack. It's worth noting that the Suns, who famously don't care all that much about the draft, control all of their picks for the next eight seasons.

The Los Angeles Clippers don't have the pick capital that the Suns do, but they have their choice of mid-tier contracts — Marcus Morris ($16.3M), Luke Kennard ($14.4M), Robert Covington ($12.3M) and Nicolas Batum ($10.8M) all fit — and intriguing young guys (Amir Coffey, BJ Boston, Jason Preston) to get into the discussion. I would imagine Covington would be the most expendable of the mid-contract veteran group; Covington, a young piece and a way-off future first could likely get a conversation started.

The Milwaukee Bucks have reportedly been lurking around the forward market, notably being linked to Crowder as a potential target. Like the Clippers, they don't have access to first-rounders in the immediate future. My sense is they'd be a little hesitant to move those considering that Jrue Holiday and Khris Middleton are both over 30 years old — and they have some fun contract stuff to sort through with Middleton soon.

Beyond that, it's easy to see the on-court Kuzma fit in Milwaukee. He'd fit their size ethos up front, and his creation abilities could take some pressure off the Giannis-Jrue-Middleton triumvirate. They're also a team that feels a wing/forward defender short; Kuzma would help.

Meeting the vet + young piece + pick(s) threshold would be difficult though; I'm not sure a package of Grayson Allen, one (or both) of MarJon Beauchamp and Jordan Nwora and down-the-line capital would appeal to the Wizards. And considering how much market matters for Kuzma, the long-term fit may not be there.

The Cleveland Cavaliers would be a fun landing spot, but they just blew their pick load in the Donovan Mitchell trade. They don't necessarily pass the market test either.

The Miami Heat might be the cleanest landing spot in the East considering on and off-court stuff, but they're:

1) Short on pick ammo to make a comfortable move.

2) Two tiers below the contending class at this point.

Kuzma would absolutely make the Heat better; would he improve them enough to justify cashing in their limited chips instead of going star-hunting again during the summer? I have my doubts.

While we're in the non-contender class: How about a make-me-feel-wanted swap between Kuzma and the Atlanta Hawks' John Collins? The Wizards would have to add more salary — Hachimura and Anthony Gill would get them there — but it's a framework I'd consider if I'm Washington. A Collins-Porzingis frontcourt would be an interesting mix; if all else fails, Collins has enough years on his deal to start the trade dance all over again if necessary.