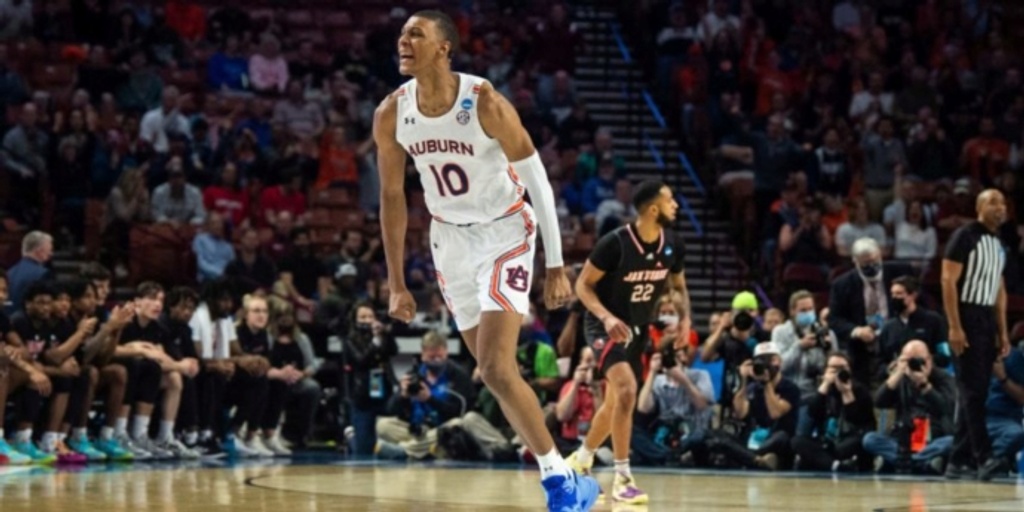 With March Madness behind us and the NBA Draft lottery odds set, we're now into the next phase of the scouting season.

BasketballNews.com Sr. NBA Draft Analyst Matt Babcock transitioned our 2022 NBA Draft Big Board into our first NBA Mock Draft of the year. As teams, scouts and analysts gather intel, this mock serves as an early peek into what draft night could look like in June.

Babcock discussed his latest projections, some early storylines to monitor in the spring, prospects who shined in the NCAA Tournament, and more in the following Q&A.

What makes Jabari Smith the pick for the Rockets at No. 1?

The Houston Rockets only won 20 games this season, but it's not all doom and gloom. They're in rebuild mode, and they've already gotten a good group of young players together. In last year's NBA Draft, they selected Jalen Green with the second pick, and it looks as if he could emerge into a primetime scorer who they can build around.

They also drafted Alperen Sengun, Usman Garuba and Josh Christopher,  selected KJ Martin with a late second-round pick the year before, and added Kevin Porter Jr. via trade. All of the players mentioned above are younger than 21 years old. They've struggled to win games up to this point, but they have a young nucleus to work with as they look to build for the future.

Regarding this year's draft, it's pretty close among the top prospects, and it seems as if everyone has their unique argument as to who are the top prospects and why — which I appreciate, as I think there usually tends to be too much groupthink in the draft space. Anyway, Jabari Smith Jr. is my No. 1 guy, and he has been for a while now. At 6-foot-10, Smith is an absolute sniper from the perimeter as a stretch four, and with time I think he will also prove that he has much more in his bag as a scorer.

On the defensive end, Smith has a chance to be special. He's about as switchable as it gets, and he's tough. His versatility on both ends of the ball will provide a lot of lineup flexibility to whatever team selects him. In addition to possessing perhaps the most upside of any player projected to be in the 2022 NBA Draft, he can essentially co-exist with just about any group of players. Therefore, I believe that Jabari Smith Jr. would be the right pick for the Rockets if they indeed win the NBA Draft Lottery.

Which teams could shake up the draft selections if lottery luck lands them in the top-3?

My first tier includes Jabari Smith Jr., Jaden Ivey, Chet Holmgren and Paolo Banchero this year. Of that group, Jaden Ivey is the only guard. Due to his style of play, I'm not sure he's a great fit with several teams potentially selecting towards the top, including Houston, Orlando, Indiana and San Antonio -- they're all pretty guard-heavy at the moment. If any combination of these teams lands in the top-3, I wouldn't be surprised to see Ivey sliding back a touch.

Another thing worth noting is that I'm also not sure Paolo Banchero would fit well with teams like New York or New Orleans. On the flip side, Jabari Smith Jr. and Chet Holmgren fit in pretty seamlessly with most teams. I think these are a few elements that could potentially dictate how the first few picks unfold.

What inspired Mark Williams' rapid rise to the No. 12 overall pick?

I'll admit the 12th pick is on the high side for Mark Williams, but I like the fit, and I don't think it's too much of a stretch. Williams had a terrific season at Duke this year, and he's continued to grow on me. His performance versus Gonzaga in Las Vegas in November was one of the best showings I saw in-person all season. I think he has a chance to develop into becoming a solid starting center as a rim running and rim-protecting 5-man. I wouldn't be surprised to see him have a long and productive NBA career.

In our most recent simulated mock draft, Oklahoma City selected Paolo Banchero with the fourth pick and Mark Williams with the 12th pick, coincidentally Duke's frontcourt this past season. The Thunder have Shai Gilgeous-Alexander locked up on a long-term deal and Sam Presti's lottery selection last year, Josh Giddey, looks like a star in the making. So it seems their backcourt of the future is solid. Adding Bancero and Williams would bolster their frontcourt, giving OKC's roster shape moving forward.

Which other prospects benefited most from their March Madness performances?

He was already rated super high, but I think Paolo Banchero finished strong. Ochai Agbaji was terrific versus Villanova in Kansas' Final Four game. Benedict Mathurin had a couple of outstanding games in the tournament, and Kennedy Chandler was good for Tennessee. I think all of those players helped themselves in March.

What is one of your favorite later-round team-player fits?

A few picks in the second round that stand out are David Roddy from Colorado State to the Pacers, Jake LaRavia from Wake Forest to the Hawks, and Colin Gillespie from Villanova to the Pelicans. None of those players necessarily blow me away with their talent or tools, but I think all three could become excellent complementary players.

They're all very different players from one another, but they're all talented in their own right. Daniels and Beauchamp showed well this season and have moved up the ranks. Hardy came into the season projected to be a high pick and the highest of this group, but he didn't do quite as well as most people had hoped, myself included.

Daniels has terrific size and versatility on both ends of the ball, Beauchamp is very athletic, plays with a great pace, and makes a lot happen. Hardy might have struggled a bit this season, however, he still has a lot of raw talent as a scorer and shot-maker with deep range. I expect all three to be selected in the first round.

While many of us were focused on March Madness, have any draft-eligible international players made waves recently?

Ousmane Dieng, a player from France currently playing for the New Zealand Breakers in the Australian League, is the player that comes to mind in regards to someone who has been making waves recently on the international scene. Dieng has terrific size for an on-ball playmaker, and I think he possesses a lot of upside as a versatile point forward. He has a good chance of becoming a first-round pick.

After the success of last year's first Tampa Bay Pro Combine, what should we expect from the event this spring?

It's been great to see some of our guys who participated in the Tampa Bay Pro Combine last year find success quickly in their careers. I mean, Terry Taylor and Brandon Williams signed NBA contracts, but they also played significant minutes for their teams. Jordan Goodwin and Micah Potter had opportunities with NBA teams too. It was incredible to see!

We've changed the format this year. First, we cut the number of invited players from nearly 50 to 24 this year. Instead of just playing five-on-five games all week, we decided to host simulated NBA pre-draft workouts the first two days, where we'll have six players on the court at a time and 12 per day. The main reason for this change was to comply with NBA guidelines so that NBA scouts could attend. Anyway, we have another great group of guys set to fly out and compete. It should be a great week!