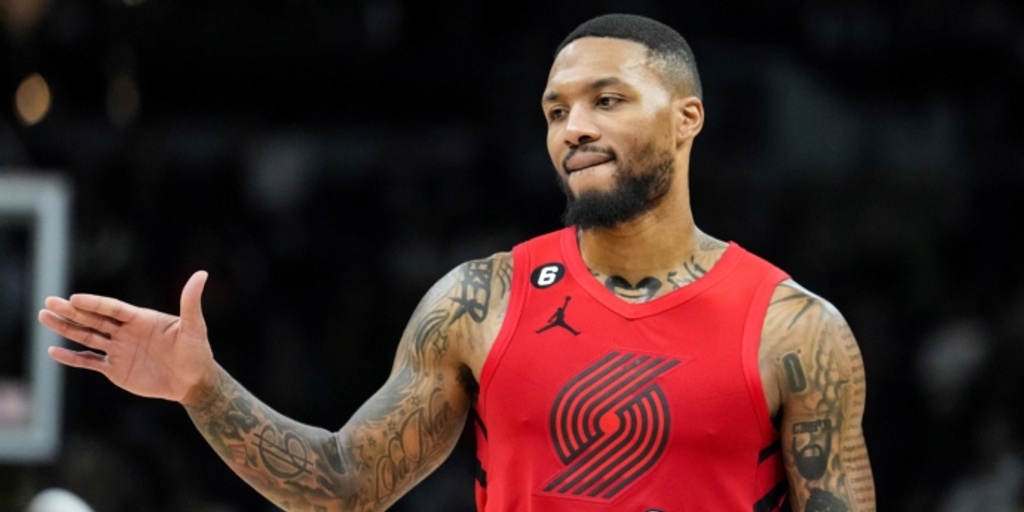 The first returns for NBA All-Star voting were released on Thursday afternoon. For those who have been following the season somewhat closely, there weren't many surprises among the top of the list.

LeBron James and Kevin Durant are the top vote-getters, slated to be captains for their respective conferences. Stephen Curry and Luka Doncic will likely start in the backcourt for the Western Conference; Kyrie Irving and Donovan Mitchell, Mr. 71 himself, headline the guards in the Eastern Conference.

There are some weird ones — like Kevon Looney and Austin Reaves being top-10 vote-getters in their position groups over Domantas Sabonis and De'Aaron Fox respectively. The lack of love shown for Bam Adebayo, Julius Randle and Jalen Brunson is odd, to say the least.

It's been easy to push Lillard on the back-burner because he hasn't been MVP-good like Doncic (or a healthy Curry) and he hasn't had the "wow" factor like Ja Morant (third in West guard votes) or Shai Gilgeous-Alexander. On top of that, Dame's missed 12 games and the Blazers are No. 7 in their conference. Those two things might be related; Portland is 5-7 in the games Lillard hasn't played.

But I think it's past time to show some appreciation for the season Lillard is having. Not only has he been really good when healthy, there's also been a stark contrast to his usual approach and usage this season.

We can start with the base numbers though: 27.4 points (.533/.371/.888 shooting splits), 7.2 assists and 4.0 rebounds per game. That's good stuff, and it puts him in the room with Doncic and Morant as the only players averaging 27-4-7 this season. A simple efficiency baseline — let's say a True Shooting percentage of 60% — knocks Morant off the hill, leaving just Doncic and Lillard.

I'd like to make a claim on this Lillard season: This is the most efficiently he's been used in his career.

It's slightly different than saying this is the most efficient he's been — his 61.5% TS is the third-highest mark of his career. But it's refreshing watching Lillard thrive as a scorer without having to work as hard, or against as many set defenses, as he's had to in the past.

The catalyst to this has been the Blazers' intention on getting Lillard off the ball. He's flying off 17 off-ball screens per game (23.7 per 100 possessions), per Second Spectrum. That isn't just a drastic shift from last season (10.2, 13.7 per 100); it's a diet we haven't seen from him in half a decade.

Lillard's ability to shoot off movement has long been underrated. His shot prep is superb, able to quickly balance himself on the catch if opponents botch a coverage against him. If Lillard's defender is trailing an off-ball action, the next guy in the chain — a big or another wing player — better be prepared to take away airspace. If not, Lillard can fire before you can blink.

And because Lillard draws that much attention, the offense opens up for others. There are possessions the Blazers kick off with a Lillard off-ball action for the sole purpose of taking attention away from what they really want to get to.

Watch the eyes of Lu Dort (No. 5) and Mike Muscala (No. 31) on this possession. Because they're keyed in on Lillard coming off the Jerami Grant screen — and expecting a pick-and-roll from there — they wind up wholly unprepared for the flare screen being set for Anfernee Simons.

But even with Dort and Muscala getting lost in the sauce, they weren't paying attention to Lillard for no reason. Some of the off-ball usage for Lillard has been with the intent of flowing into a ball-screen directly after. Making the defense move before the ball-screen is generally better than a static, everybody-stand-still setup. When you aren't keyed in, Lillard can burn you there too.

Take this possession against the Charlotte Hornets, for example. Lillard coming off an early cross-screen creates so much chaos. (You can get a more detailed breakdown here.)

It's also worth noting that Lillard's off-ball value isn't limited to coming off screens himself. He's setting over six off-ball screens per 100 possessions, nearly double the rate he had last season (3.7) and the year before (3.0).

You won't confuse him with Steph (11.4 per 100) in terms of volume, but the effect has been similar. The Blazers have generated 1.13 PPP on trips featuring an off-ball screen from Lillard; that ranks ninth in the league — and second among guards (Marcus Smart, 1.25 PPP, first overall) — among players that have set at least 100 off-ball screens this year.

The addition of perimeter talent like Grant and Josh Hart have played a part in Lillard's shift in usage. The continued rise of Simons, a versatile offensive weapon in his own right, also limits the need for Lillard to initiate everything.

To that point, we've seen a massive decrease in pick-and-roll volume. After receiving nearly 57 on-ball picks per 100 possessions during his last healthy campaign (2020-21), Lillard is down to roughly 42 this season.

The Blazers still blitz teams on those possessions, with any trip featuring a Lillard pick-and-roll generating 1.08 PPP. That number ranks sixth among 56 players to receive at least 500 picks. Lillard remains a firecracker, able to pull up from 30 feet, boogie against big or weak defenders if they switch out and split traps and hedges when they come.

Zoom out, and we come to a common conclusion: The Blazers are a tough team to defend. They're eighth in offensive rating (115.7) and 12th in half-court offense per Cleaning The Glass. Those are high marks considering Lillard has been absent for 12 of those games.

It may look a little different this year, but Lillard is still torching teams when he's on the floor.