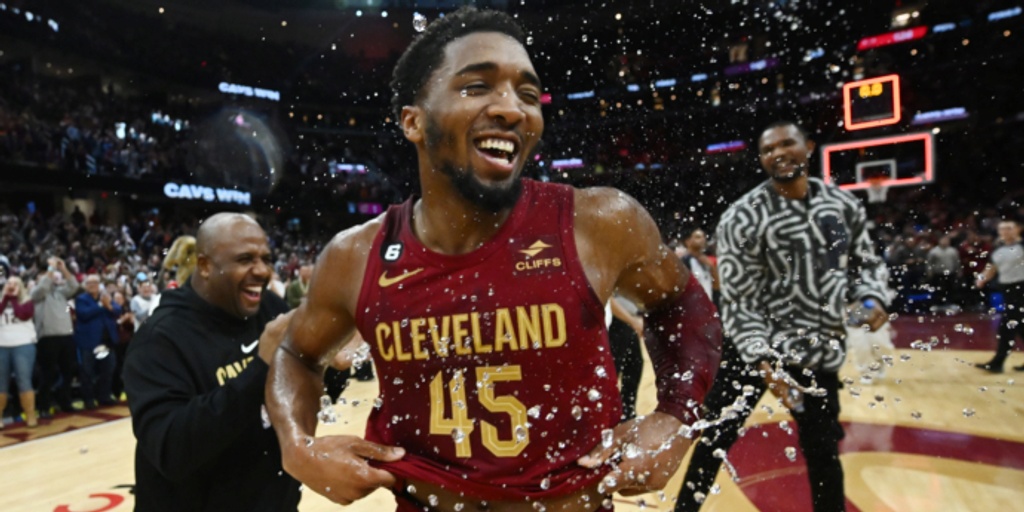 In miraculous, comeback fashion, Donovan Mitchell rallied the short-handed Cleveland Cavaliers from a double-digit deficit with an NBA season-high 71 points on 22-of-34 shooting from the field to defeat the Chicago Bulls to ring in the New Year at Rocket Morgage FieldHouse.

"I had to do a little something with Darius [Garland] being out," Mitchell told Bally Sports Ohio's Serena Winters with a grin following the performance.

Donovan Mitchell sets a new scoring record for the Cleveland Cavaliers and becomes only the 7th player in NBA history to score 70+ points in a game. pic.twitter.com/qbOwr3sqyH

"First and foremost, my teammates, we fought. I know I had 70 and all, but I wouldn't be here without them. We wouldn't have been in this position without our guys making crucial plays," Mitchell said. "That's the honest truth. We didn't come out too great to start the first half. (Cavs head coach) J.B. [Bickerstaff] threw some stuff around, screamed at us a little bit, told us to lock-in, and we all did it as a group. My teammates put me in the right positions and I just made the plays."

"I was telling some of these guys, in my 15 years, that’s the best performance I’ve ever seen. And I’ve been a part of — I’ve seen some special ones," Kevin Love added. "I was talking about Kyrie [Irving] here against Portland when he had 55. LeBron [James] in Game 1 of the 2018 Finals. Fifty-seven for Kyrie in San Antonio. But this one takes the cake. You see he had 34 shots, 20-for-25 from the line, 7-for-15 from three."

Mitchell also created 28 points for his teammates on 11 assists, meaning he was responsible for 99 of the Cavs' points combined. That's the second-highest mark to Wilt Chamberlain's NBA record of 104, per OptaSTATS.

"But you know, I hope people don’t overlook that he had 11 assists and 8 rebounds as well. Four turnovers (laughs). That’s just, I mean, Don... I think I’ve told you guys time and time again, but his process, the way he works, how he takes care of his body, how locked in he is, he means everything to this team," Love added. "I was saying, our group text from 2016, I was like, ‘What was Donovan’s asking price?’ That was something special tonight. He’s one of what, seven players that have scored over 70? That’s elite company, I can only imagine those names."

Showered with MVP chants once again by the wine-and-gold faithful (with Cedi Osman leading the crowd), Mitchell delivered a whooping 55 of his points in the second half and overtime to will Cleveland to back-to-back victories over its Central Division foe.

"He was determined to show that this group and winning is the most important thing to him. There's not enough words... I've never been a witness to a performance like that live," Bickerstaff said after the game. "I think we've seen something (like it) on TV before, but we were treated tonight to one of the greatest performances in the history of the NBA."

Mitchell went 7-for-15 from three-point range and converted 20-of-25 free throws in the game.

Impressively enough, he had to give himself an opportunity to accomplish the feat with a putback off an intentional miss from the charity stripe similar to how Luka Doncic executed it last week. It tied the game at 130 apiece, where Mitchell would drop 13 in the extra period.

Are you serious, Donovan?! 😳 pic.twitter.com/YVpO9RDmzs

"Just miss the free throw the right way. I actually work on it... I'm lying," Mitchell joked. "Shout out to my guys. They had to box out the bigs. No one boxed me out, and I ran in just trying to make the play... Crazy series of events. I appreciate the trust [J.B.] has in me. It's a wild finish. Sometimes you've just gotta laugh it off and just go out there and continue to do what you've gotta do."

"It's humbling. I'm speechless to best honest with you when you say that," Mitchell told reporters. "For me, not only did I do that, but I did it in an effort where we came back and won. And it's how we won. It's like, man, this is... nuts (laughs) to be honest.

"I'm extremely blessed and humbled that I'm in that company, in that group. I've always believed I could be one of the best players in this league, but I've gotta keep working. This is a big milestone, but at the end of the day, we've gotta continue... those guys have all won at the highest level and that's my ultimate goal. But to be there with them in the record books is just truly incredible."

Donovan Mitchell on joining an elite group of NBA players to score more than 70 points in a single game. #LetEmKnow pic.twitter.com/zZTBdiiiC7