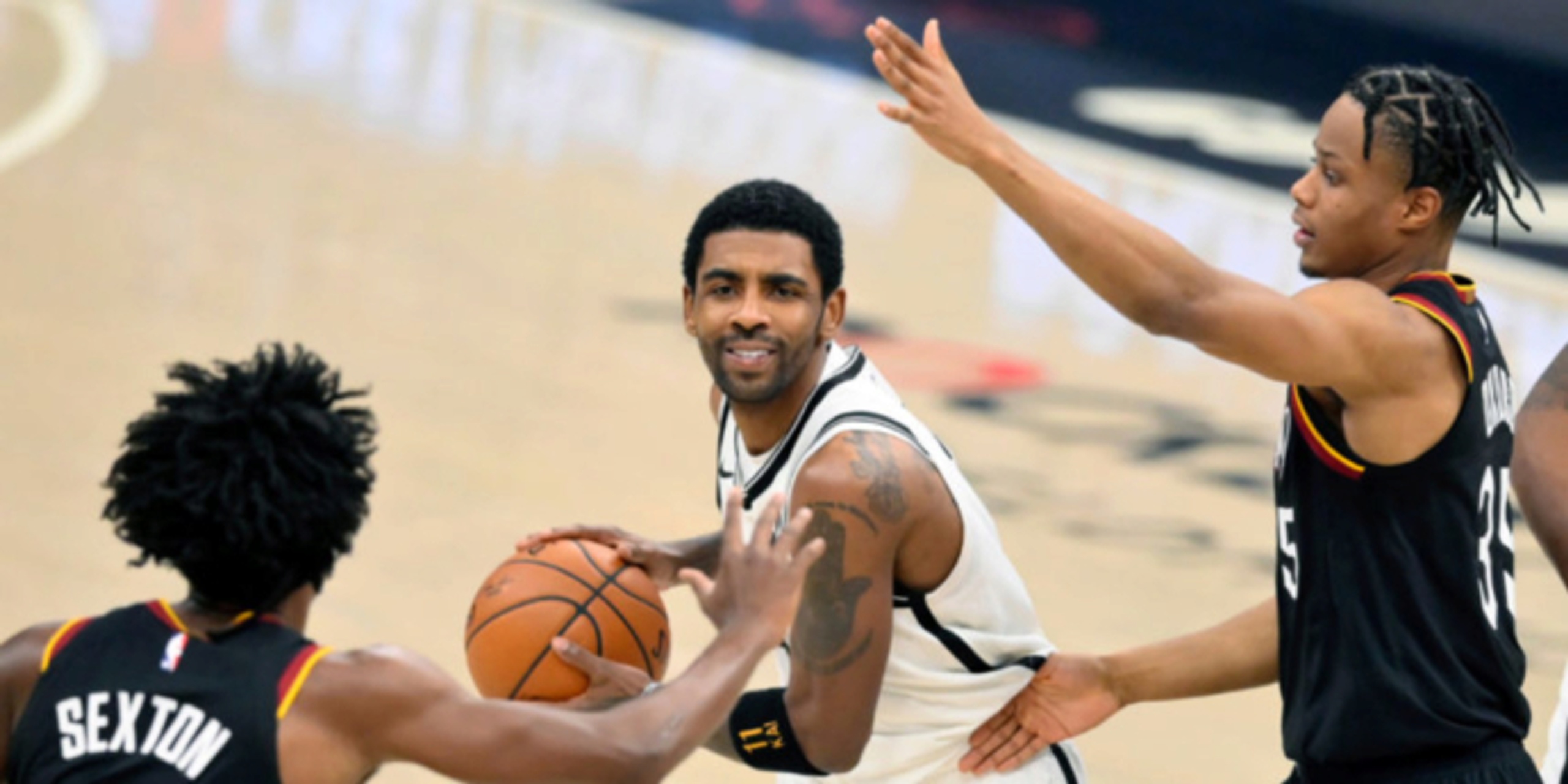 With the new-look Brooklyn Nets set to come to town for a pair of games, Cleveland Cavaliers rookie forward Isaac Okoro was asked on Tuesday what he was most excited about entering the matchups.

The Cavaliers took down Brooklyn’s Big Three in double overtime, 147-135, with fast-and-furious action at Rocket Mortgage FieldHouse on Wednesday night.

It was an affair jam-packed with storylines: the debut of the Nets’ star-studded trio of Kyrie Irving, James Harden and Kevin Durant, a revenge game for Jarrett Allen and Taurean Prince, the return of Cavs star Collin Sexton after missing five games with an ankle injury and so on. Sexton’s 42-point scoring outburst stole the show, as he took over the game at the end of overtime and double overtime, pouring in Cleveland's last 20 points to send his squad to victory.

While his backcourt partner (rightfully) got the shine, Okoro also stood out by holding up his end of the bargain on the defensive end. The 19-year-old forward was tasked with guarding Harden, who in his first two games with Brooklyn scored or assisted on 129 of the team’s points.

Cavs head coach J.B. Bickerstaff had a spirited talk with Okoro one day beforehand to get the rookie as ready as possible before Wednesday’s matchup.

“It’s always funny because it’s one thing when you tell a guy something versus when they actually get the opportunity to feel it and see it for themselves,” Bickerstaff said on Tuesday. “So we were laughing about how many guys before didn’t believe some of the things -- like when James Harden puts the ball in your face, you actually think you’re gonna take it, but he ends up getting fouled and going to the free-throw line. Guys don’t believe it until they see it.”

In Wednesday morning’s shootaround, those conversations continued. Sexton even told the media he had a laugh because the coaching staff was simulating Harden’s playstyle of drawing contact to show Okoro what he could be dealing with that night.

Well, that preparation certainly paid off. Harden did not have the same type of success in his third contest with the Nets, and it was in part due to the standout efforts of Okoro.

In the first half of the game, Harden attempted just two shots and registered two total points, both off free throws. While it’s understandable given Irving’s return to the team and the meshing of new pieces, the All-Star couldn’t dupe Okoro with his usual habits. The rookie stayed in front of Harden, keeping him from getting too close to the basket and finding his spots, and forcing him to give up the ball quite a bit.

Okoro held Harden to 0-for-2 from the field with two points in the first half. The All-Star guard was on the floor for 19 minutes and turned it over three times. https://t.co/hxAuookr7t

“I think that’s who Isaac is,” Bickerstaff said after Wednesday’s win. “I think Isaac is a really good positional defender. He makes you work for it. Obviously, James is one of the best offensive players in our league; he will have his nights, we’ve all seen that clearly.

“But Isaac makes you beat him. He doesn’t give you angles, he doesn’t go for steals and get out of position. He makes you have to score over the top of him, and I thought he did a great job of that in the first half for sure.”

Harden’s attempts to get past or around the stout Okoro were to no avail, so much that he didn’t even take a shot until a minute and 25 seconds into the second quarter.

“It was impressive from the young fella,” said Taurean Prince, who scored a season-high 17 points in his Cavs debut. “Usually you see guys kinda get happy feet guarding those caliber of players, but he was staying solid and sticking to his principles. Definitely stuck to the game plan. He definitely looked well-prepared and focused out there, and that’s truly all you can ask (for) out of the young guy.”

Of course, Harden is not going to be held down for very long. He found some success in the second-half and overtime periods, and ended up dropping 21 points (along with recording his third consecutive triple-double for the Nets). With that said, when you look at the shots he made, he didn't actually score on Okoro until the 3:28 mark in the fourth quarter.

According to NBA.com’s matchup data, Okoro defended Harden for 5 minutes and 7 seconds. In that time, the Beard managed just four points and drew just one shooting foul against the upstart first-year swingman. Don’t believe that? Check the video evidence.

"I feel like I did pretty well," Okoro said Friday morning at shootaround. "I feel like I made a couple mistakes with the fouls."

Okoro also picked up Kevin Durant for 3:55 -- the former MVP didn’t attempt one shot in that span -- and Kyrie Irving for nearly three minutes, including a key stop in overtime when the Nets were up five. The Cavs capitalized on the other end and swung the momentum back in their favor.

“He was everywhere,” said Jarrett Allen, who posted a 12-point, 11-rebound, 4-block double-double in his Cleveland debut. “None of us are perfect out there, but he didn’t make a lot of mistakes. He played well. He knew Harden’s tendencies; he didn’t let him get to the free-throw line too much. He was just out there playing hard. That’s my first time really seeing him play against another team, and he really impressed me.”

“He’s that guy that’s gonna bring us a lot of energy and great defense every night," Osman added. "He did knock some corner shots (down) tonight too. He had a great game.”

The plus-minus and the net ratings weren’t aesthetically pleasing, nor were Okoro’s challenges to the Brooklyn bigs in the paint and the fact that he fouled out. But Bickerstaff and the Cavs trusted the young man to study up and slow down the best offensive players in this league.

“He took the challenge,” Sexton said. “He played hard and really well. That’s a tough-nosed guy. He’s from Atlanta, so.”

Okoro delivered on Wednesday. Ahead of Friday night's game, the rookie feels watching film and seeing what he did wrong will help him improve in the Brooklyn rematch. He also feels like Harden is going to come out more aggressive and in attack mode, but he'll be ready for it.

"Staying on your feet, always being in a defensive stance," Okoro said of what he learned. "Those are great players right there. They can score at all three levels. They always tricks up their sleeves, so just being ready for those tricks.

Growing up, Okoro admired all three of those amazing talents and watched them on TV.

But when he took the floor at Rocket Mortgage FieldHouse against them, it was all business to come out on top with his team.

"It wasn't me thinking I'm star-struck or anything like that," Okoro said. "I'm just here to play basketball and win the game."

MORE:
NBA
Nets

Behind 42 points from Collin Sexton, Cavs stun Nets in 2OT
Kendrick Nunn Q&A: 'My No. 1 goal is running it back to the NBA Finals'

Featured News

NBA Expansion Mock Draft: What would a new expansion team look like?
13h
What is the ideal slate of NBA games for Christmas Day?
9h
NBA passes 70 million Instagram followers, ranks top-10 among brands
2 days
How can the Thunder and Shai Gilgeous-Alexander balance their needs?
2 days
Tom Izzo agrees to five-year rollover contract with Michigan State
2 days
Bill Russell’s No. 6 jersey to be retired throughout NBA
3 days
How Rudy Gobert and Karl-Anthony Towns can work as Timberwolves' duo
3 days
Subscribe to our newsletter
SUBSCRIBE
Follow Us



Basketball News
Home
Podcasts
Scores
Draft
Stats
News
Charts
Contact
Contact Us
Advertise With Us
Terms Of Use
Privacy Policy
Do Not Sell My Personal Information
Cookie Policy
Download Our App!
Stay up-to-date on all things NBA
Copyright © BasketballNews.com 2020. All Rights Reserved.
