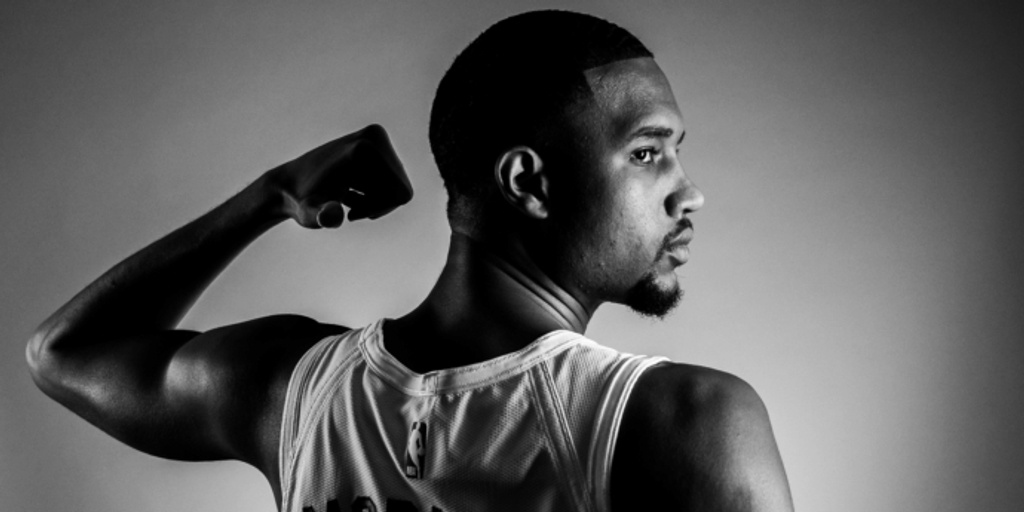 Louder, bulkier and more locked-in than anybody’s seen him before, Cleveland Cavaliers sophomore Evan Mobley is determined to surge to another level, and his teammates and coaches are eager to see it unfold.

“Evan, he's on a mission right now,” Darius Garland stated at Rocket Mortgage FieldHouse on Monday. “I think that he's on the mission of the Rookie-of-the-Year campaign (after a second-place finish). I think he's felt that this year, felt that this summer, and he really wants to show the world what he really can do and what they missed out on last year, sohe's coming in a lot more hungry. He's a lot stronger. He knows more about the game than he did last year. So we’re super excited to see his jump from last year to this year, so I'm excited to see for sure. Hopefully [we have] four All-Stars as well.”

With an impact on winning basketball and a scintillating start, Mobley helped lead the Cavs to one of the strongest starts in the Eastern Conference last season. Remember, this was a team that was picked to finish in the bottom half of the standings in the 2021 preseason (by just about everyone outside of the building). Yet, in spite of rotational injuries and setbacks, Cleveland made a Play-In Tournament appearance and put together a 44-38 record.

And while his counting stats were solid in their own right — 15.0 points, 8.3 rebounds, 2.5 assists and 1.7 blocks per game on just a hair under 55% True Shooting — they hardly encompass how brilliant he truly was at such a young age.

“I’m really proud of everything I accomplished this past year,” Mobley said. “I feel like I did the best I could. Everything that went down last year was great, it was a learning experience. I’m just trying to get better from it and come next year even stronger and harder.”

The then-rookie Mobley’s prowess as a help defender, on-ball defender and off-ball defender worked flawlessly in tandem with Jarrett Allen’s blunt, emphatic rim protection. Evan started fast breaks with deflections, rejections and ridiculous lateral movement that led to turnovers. Opposing guards thought it would be smart to force a switch with either 7-footer, but as the season went on, teams quickly learned that this was the wrong idea. (It should be noted that Lauri Markkanen, Cleveland’s ex-primary small forward, played a huge role in this success as well.)

However, it’d be short-sighted to gloss over the fact that the USC product provided flashes of brilliance on the offensive end in some games, particularly as a playmaker and off the dribble. We can certainly expect the Cavs to ask more of him on that side of the court as a sophomore.

“I’m just going to try to affect the games in different ways that I didn’t necessarily really do last year, such as bringing the ball up. You’ll see me on the perimeter a little bit more as well as inside, obviously,” said Mobley, who told the media he got even closer with head coach J.B. Bickerstaff this offseason. “Me and him just had conversations throughout the summer, just trying to get me ready for this season. He’s been really working with me, with my faceup game, really playmaking from the elbow area and mid-range area and getting to my spots and hitting ‘em and knocking ‘em down. I feel like that’s where you’re really going to see me a lot this year... (My three-point shot) is coming along really well. I’m happy with all that I’ve been working on. Hopefully this year you’ll see a lot more threes.”

“Every time I have to guard him, it seems like he scores,” Allen said. “He always scores on me. His offensive game is improving still from what it was last year. We obviously know he’s an All-NBA Defense-caliber type of defensive player. On the offensive side, he still amazes us every time.”

Having worked out together in Los Angeles this past summer, Kevin Love spoke with Mobley's father, Eric, and found out how serious Evan was about becoming great.

“We know what he’s capable of. He hasn’t even scratched the surface of really how good he can be. But all the signs are there and he’s not afraid to work,” Love said. “When I saw him in L.A. when we were all there together, I thought, ‘Okay, he’s going to make a big step.’ He’s obviously been putting in the work; he hasn’t been shy about showing up and putting the hours in, adding a little bit to his game. We know what he can do defensively, but the thing that stuck out to me was just again his size, his ability to be a shot-maker and put the ball on the floor.

“I think he has the skill set to be able to do whatever he wants offensively. I think between, whether it be Donovan [Mitchell] or Darius or J.A., we have so many young guys on this team who can do so much. But I think as a 7-footer, he’s one of those guys that’s like a unicorn, able to do it all now and be very special.”

Kevin Love on Evan Mobley in Year 2: "When I saw him out in LA., I thought to myself, 'Okay, he's gonna make a big step.'" #Cavs @basketbllnews pic.twitter.com/oQ6J3adyIv

Another reason Cleveland should be excited about the 21-year-old is the amount of muscle he added this offseason. He can't put a number on it, but his arms definitely took center stage while at the podium, and he admits that he feels stronger and heavier. And the bigger he’s gotten, so evidently has his voice.

“I’ve known Ev since he was in high school and I’ve probably heard him say five things before we got here. Now, he’s talking and communicating and getting to his spot,” Donovan Mitchell said on Tuesday. “He’s much better, and I don’t mean that in a bad way. He was really good in high school and he’s really, really good now. For him, there’s little things he can obviously improve on, technique and stuff like that. But his natural feel for the game as a defender, as an offensive player, there’s certain things you just can’t teach.

“Obviously, we all know the size and quickness and the speed and his length. But for me, his instincts of knowing where to be, and this is just after one year being in the league, that’s not always the case for a guy that just turned 21. He’s got a lot of potential in a lot of areas. From what I saw in Nashville and from playing pickup when I came back here and even [Tuesday], there’s just little things that he does that you just can’t teach. It makes teaching even easier because he’s able to pick up on stuff and get better day by day.”

Cavs president Koby Altman can’t help but envision what Mobley’s progression will look like after having another year of experience under his belt.

“His commitment has been incredible, of what we've challenged him to do,” Altman said. “He was one of the contingent that came back to Cleveland multiple times before summer league, showing his commitment to the organization and what we're asking him to do. At 21 years old, we're already giving him a lot of challenges — not only from the basketball court, but off the court from a strength-and-conditioning, nutrition program. All of this [is] to mold him to be what we think he could be, which is a superstar.

“We're very excited about Evan Mobley here. He's about basketball. He's about team. He’s about all the right stuff. We're really fortunate to have him.”

Echoing his players’ sentiments, Bickerstaff is enthusiastic about Mobley’s eventual development into one of the best players on the team and in the NBA.

“Our conversation with Evan and our expectations is he has the ability to be a superstar without being the leading scorer on your team. He has an opportunity to be the best player on the floor without having to take the most shots. I think that's hard to find. But he does [have that]. He can stuff the stat sheet in every category; that's our expectation for him.

Evan Mobley on his chats with J.B. Bickerstaff and his offensive offseason improvements. #Cavs @basketbllnews pic.twitter.com/MEzmb3bUC8

With all of this hype surrounding the maturation of his game, Mobley likes to keep it about the squad as a whole. His sole goal, like everybody else, is to help the Cavs succeed at the highest level.

“I think our whole team is trying to win. I feel like we didn’t go to our full capacity last year and I feel like we’ve got a lot to prove this year,” Mobley said.

(Note: This article mistakenly originally stated that Mobley gained 25 pounds; that is incorrect. The 240-pounder is his older brother, Isaiah.)