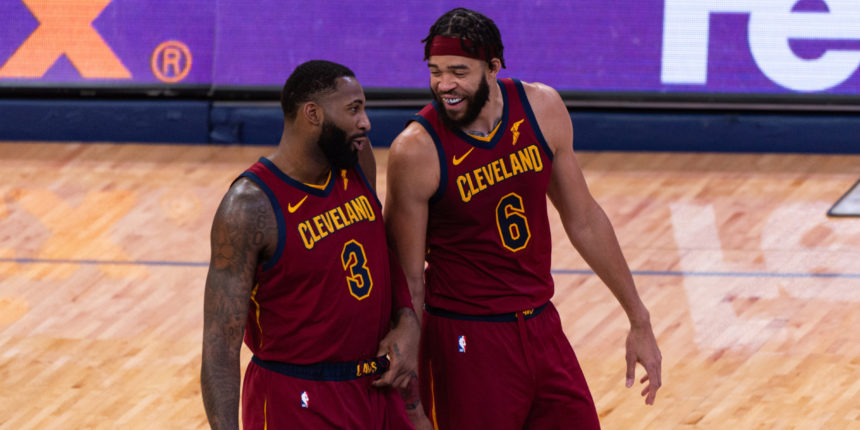 Andre Drummond-JaVale McGee duo gets results for Cavaliers in Memphis

But have you heard of JUMBO ball?

That's what the Cleveland Cavaliers went with at several points during their 94-90 road victory over the Memphis Grizzlies on Thursday. Missing a plethora of bodies -- including a number of key guards -- head coach J.B. Bickerstaff had no choice but to beef up his rotations, forcing his frontcourt players to play down from their regular positions.

Andre Drummond and JaVale McGee shared the floor together for seven minutes total. Although advanced statistics can be loud, the net rating is hilariously astonishing. According to NBA.com, the Drummond-McGee combination boasted the highest offensive rating on the team (158.3) among two-man combinations on Thursday night. In their 15 total minutes shared together, the Twin Towers have a net rating of plus-23.3.

"I mean, honestly, with all of our smalls being hurt, sometimes we're just trying to make five out there, and it happens to be big guys," Bickerstaff said with a chuckle following the win. "Our big guys are skilled. They can pass, they can handle, they can space the floor. I think we've got a 5 and a 5.5; I don't think we have a 4 technically with that group."

"I don't know what I am at this point," said a smiling Drummond, who recorded his ninth consecutive double-double to start the season. "I'm just out there to make the best decisions possible. Whatever position I need to be in, I'll get the job done. I love playing with JaVale, man, just 'cause he's such a smart basketball player and he makes my job a lot easier when he's out there."

"Do you know how to guard that lineup?"

In the 15 minutes they've shared the floor together, Andre Drummond & JaVale McGee have a plus-23.3 net rating as a duo. With injuries, J.B. Bickerstaff & the #Cavs have gone BIG.

Larry Nance Jr. shook off a slump Thursday night, going a perfect 7-for-7 from the field and knocking down all four of his treys. He also shared the floor with the big-man duo for five of those seven minutes, and that three-man group led the way with a net rating of plus-87.8.

"I've had the center position on my resume, I knew I had the power forward, I've got the small forward, but I think [Thursday] I may have added shooting guard as well," Nance said. "When people draft me for fantasy, you can use me for 2-through-5. They better update that... It was funny! I love it.

"...Do you know how to guard that lineup? I don't! Basketball's gone so small, and sometimes when you go big, it shocks people. They didn't know what to do. They didn't have the bodies for it, they didn't have the size for it... It worked for us tonight, and until we have more bodies, it's gonna have to keep working."

"It scares teams," Drummond added. "Not only are we a big lineup, but we're able to move our feet defensively, so it makes teams uncomfortable as well, too. And offensively, we find ways to feed off each other. JaVale got the open corner three, which nobody expected, which is why he was wide open.

"For myself, being able to drive and then, when people come over to me, I'm able to get that dish off to JaVale for him to get the finish. And then Dean Wade, being the three-point shooter that he is, it's hard to guard."

When asked to discern between the four and the five of the Drummond-McGee pairing, Nance went with McGee because of his 4-for-9 start to the year. Considering the performance he had and the way things worked out, McGee's end to the night on Twitter was apropos.

After seeing what transpired in Memphis, we can probably all agree on that one: #BringTheBigManBack.