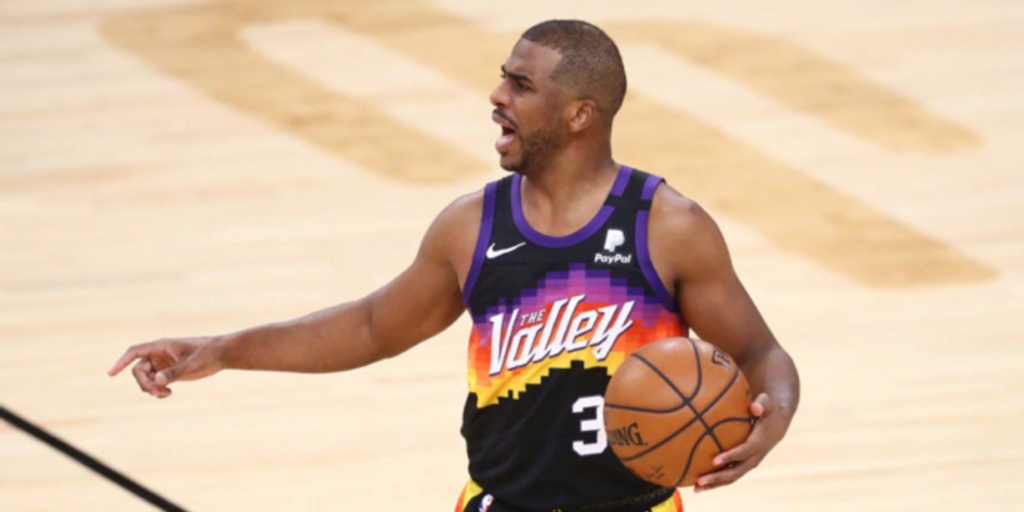 Chris Paul is always on (his) time

He's in a gym, much smaller than the NBA arenas he's used to electrifying. Instead of dealing with the league's elite pests, he's having a one-on-one with a player much younger than he is. There are no play calls, no stakes. The only thing being passed is knowledge. Granular details and tricks of the trade.

Paul poses a rhetorical question to the player he's working with: "If we're playing one-on-one, how would you guard me?

"I'm right-handed, so you'd probably try to force me to the left, right? But if that high foot is up, I may just sweep here." Paul pantomimes the rip-through move to drill home the point.

The exchange of information goes on -- subtle hand-swiping on the drive, jab steps to shift a defender's weight, and how to sell the jab with a ball swing. But then Paul is asked about getting pressured. He gives a couple of on-ball tips, then spreads the real gospel.

"It's all about keeping the guy guarding you off-balance. If a guy wants to get up into you and whatever and play you all aggressive, let him! But don't let that speed you up."

"Good players don't get sped up. Even if you try to pressure me, I'm gonna stay at the same pace."

This exchange was captured over 10 years ago at Paul's Elite Guard Camp.

It's fitting that he's using the same ethos to dominate in Year 16. You can quibble about whether Paul or Devin Booker has been the Suns' best player this season; honestly, that the discussion is even being had is a testament to Paul. However you rank them, it's undeniable that Paul's play has helped transform the Suns from playoff hopeful to legitimate contender.

THE PUSH AND PULL

Pounding the rock. Barking out orders. Pointing, waving with his free hand.

Deandre Ayton trots up to the side of Paul's defender and holds serve. Then, at the last second, he flips the angle.

Paul presses the accelerator, jetting off the pick before snaking in the opposite direction. The big's defender steps up to cut off Paul's airspace, but Paul is already rising for his fading 16-footer.

In a league that wows with James Harden or Luka Doncic stepbacks, Giannis Gyro steps, Zion spin moves and logo-launching from the Stephen Curry/Damian Lillard/Trae Young triumvirate, Paul's pull-up jumper from the elbow is just as much of a staple.

And it's not like this is a single-season blip. Paul has converted at least 50 percent of his shots between 15-to-19 feet in five of the past six seasons, per the NBA's tracking data.

It starts with getting his defender off-balance. Paul is a master at gear-shifting, mixing in hesitations, in-and-outs and crossovers to get to his spots. If he's able to get run his defender into a screen, or shift their feet so he can attack it, the possession's pretty much over.

As deadly as Paul's pull-up is, it mostly serves as a complement to his playmaking. There isn't a read that Paul can't make in pick-and-roll. He remains an elite pocket passer; corner skips are second nature. It's fitting that Paul is in Phoenix now, because there have been plenty of Nash-ian probes that have led to kicks, dump-offs and lobs this season.

What's fun about watching Paul in-depth, as a scorer or passer, is the level of control. It's obvious -- the man still handles the ball a ton -- but you can feel it. There's a cadence to Paul's play that is entirely his own.

Good players don't get sped up.

Watch those clips again, and you'll see the same load-up. A hard duck on the drive and then...he decelerates. He may stop-and-go. He may stop completely, pulling up for a jumper or hitting a teammate because the help defender slid the way he wanted to. No matter the decision, Paul has his fingertips on it.

Even if you try to pressure me, I'm gonna stay at the same pace.

About that pace: the Suns rank towards the bottom of the league in pace this season. They play roughly a possession-per-100 slower with Paul on the floor. That's not a coincidence. Paul teams have ranked in the bottom-10 in pace in each of the past three seasons, per NBA.com tracking data.

The absence of physical speed -- by cadence or by natural decline -- doesn't mean there's an absence of processing speed. Paul may set things up at his pace, but he'll capitalize on a mistake quicker than you can blink.

A fun staple of the Suns' attack: a lob off the opening tip. Ayton will tap the ball back to Paul. As Ayton trots down the floor, someone -- often Booker -- springs Ayton free with a back-pick. The chaos often creates easy buckets.

Watch the Suns flow out of Double Drag -- a high pick-and-roll where one screener dives to the rim, while the other pops behind the three-point line -- and you'll be amazed by how quickly Paul picks out the open man.

The same can be said for when the Suns get busy in "Spain" or "Stack" pick-and-rolls, where a big receives a back-screen after setting a pick for Paul.

What you may lose in pure possession count, Paul more than makes up for it with the way that he maximizes each chance. In addition to making the right shoot-or-pass decision most of the time, he flat-out doesn't give the ball away that often.

That level of optimization manifests in two distinct ways. First, he's still a good enough engine to hold down the fort while Booker gets a breather. The Suns have a plus-8.5 net rating in the 511 minutes that Paul has played without Booker, per PBP Stats.

Second, you know when you really need to take care of the ball and execute? During clutch situations. Paul is able to use his know-how to grind out half-court possessions. He also doesn't mind deferring to Booker when needed, thanks to his ability to knock down outside shots.

What we're left with is Paul once again putting together an All-NBA caliber season, while lifting the ceiling of a playoff hopeful. A top-four seed for the Suns was an optimist's view heading into the season; they currently find themselves 2.5 games outside of the top seed in the Western Conference.

Making some first-round noise after a 10-year playoff drought would've been a success heading into the season. With the league's second-best record and net rating, a top-six ranking in half-court efficiency on both ends of the floor and an 18-7 record against opponents over .500, this team is aiming for more.

With Paul dictating the flow of things like this, a title run isn't out of the question.