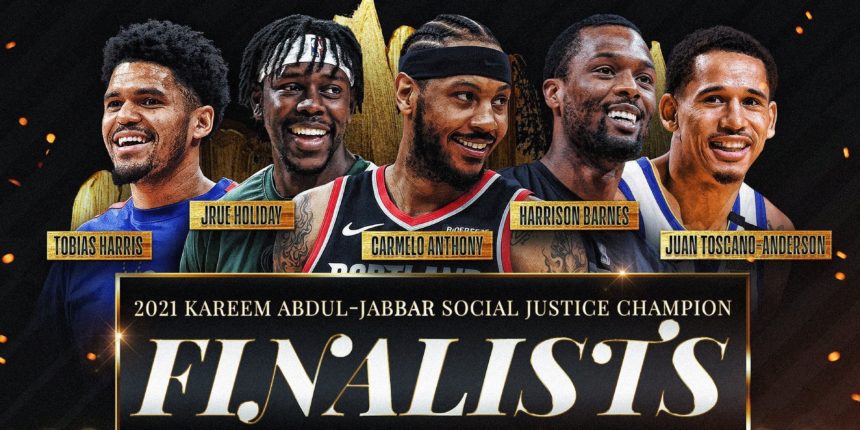 The finalists for the award were selected from an impressive pool of NBA team nominees who have upheld the league’s decades-long values of equality, respect and inclusion.  The finalists were determined by a selection committee composed of Abdul-Jabbar, notable social justice leaders, including Director of The Institute for Diversity and Ethics in Sport Dr. Richard Lapchick, student activist Teyonna Lofton, National Urban League President and CEO Marc Morial, UnidosUS President and CEO Janet Murguía, Rise Founder and CEO Amanda Nguyen, and NBA Deputy Commissioner and Chief Operating Officer Mark Tatum.

The winner will be announced prior to Game 4 of the Eastern Conference Finals on TNT.  Below is more information about the finalists, including their respective efforts and selected beneficiaries, and additional details regarding the selection committee.

A prolific champion in the social impact space, ten-time NBA All-Star Carmelo Anthony has been unabashedly vocal on how systemic oppression, racism and police brutality not only dehumanizes Black people, but prohibits the progress needed for generations of Black people to thrive and progress as a community.  He founded the Carmelo Anthony Foundation over 15 years ago as a vehicle for actionable change and social reform through a variety of outreach programs and disaster relief initiatives.  In 2020, he served as guest Editor-in-Chief for Slam Magazine’s Special Social Justice Issue and established the Social Change Fund alongside fellow NBA greats to focus on investing in organizations addressing critical and timely issues impacting the Black community including expanding access to voting and civic engagement, education, employment, housing, economic equity, and representation in leadership.  Anthony currently serves as a board member of the National Basketball Social Justice Coalition.

His work isn’t just limited to reform in criminal justice, voting or race spaces, but he also developed an incubator program focused on creativity and the arts.  Through his STAYME7O banner, Anthony established the STAYME7O Propel Program in 2020 as a way to tap into the creativity of Black culture through fashion, art and design to develop intricate pieces that honor a vision of Black excellence and inspire a culture to create and move further, together.  This spring, Anthony also announced Creative 7, his global, multi-platform content company through which he has been developing a robust slate of projects that speak to the evolution of the human spirit through adversity, social activism and compelling, entertainment-forward storytelling.  Anthony has selected the Portland Art Museum’s Black Arts and Experiences Initiative as the recipient of his donation.

Over the last year Harrison Barnes has provided meaningful support to youth, families and frontline workers in Sacramento, Dallas and Ames, IA, and has also been a vocal advocate for voter rights, addressing systemic racism and investing in Black youth.  Leading up to the 2020 election, he emphasized the importance of civic engagement and voting through speaking engagements, a collaboration with Be.Woke.Vote and casting a ballot himself on National Vote Early Day at Golden 1 Center. As part of the NBA restart, Barnes dedicated each Kings game to a different organization supporting racial justice – including the Trayvon Martin Foundation, the Botham Jean Foundation, The Atatiana Project, Mothers Against Police Brutality, the Michael Brown Foundation, Tamir Rice Foundation, Champion in the Making and the African American Policy Forum – and contributed $25,000 to those created by the families of victims of police brutality and gun violence.

In October, he was named to the NBA Foundation’s inaugural Board of Directors, helping to guide its effort to further economic empowerment in the Black community and in February, Barnes announced his partnership with Goalsetter, a Black-owned finance app that provides an education-first banking experience, to open saving accounts for 500 youth from Build.Black. in Sacramento and TL Marsalis Elementary in Dallas.  He also launched a series entitled “Conversations with Harrison,” in which he speaks with nonprofit and community leaders, educators, athletes, elected officials and business leaders to promote their work and bring attention to their causes.  Barnes has selected Center for Policing Equity as the recipient of his donation.

As a longtime advocate for social justice, Tobias Harris has been particularly focused on eliminating racial inequities within school systems that have historically harmed young people of color.  To date through the Tobias Harris Charitable Fund, he has awarded $2 million dollars to help move the needle on educational equity.  This year, he awarded $300,000 to The Fund for the School District of Philadelphia to recruit teachers from HBCUs or diverse backgrounds – who are more likely to carry higher student loan balances following graduation – and provide relocation stipends to prevent barriers of quality Black teachers in the classroom.  Harris also created the Tobias’ Top Teachers program, to assist in the recruitment and retention of Black male teachers by helping fund 55 professional development workshops and providing 800 new teachers with needed classroom supplies.  Additionally, through his Lit Labs program that focuses on improving reading scores among students of diverse backgrounds, he distributed 30,000 books to 8,000 Philadelphia children to prevent summer reading gaps and helped improve the average rate gain for young scholars by 70%.

Throughout 2020, Harris used his voice and platform to speak out against systemic injustice and racism, marching in protest of police brutality, calling for reform while in the NBA Bubble and reflecting on racial injustice in The Players’ Tribune.  With actionable change at the center of his efforts, Harris led conversations with teammates and helped launch the VOTE 76 initiative to encourage civic engagement. He was also named as one of two player representatives to the NBA Foundation board, which aims to create greater economic opportunity for Black youth through employment and career advancement.  Harris has selected Fund for the School District of Philadelphia as the recipient of his donation.

A longtime advocate for social justice, this past year Jrue Holiday has focused on creating economic opportunity and empowerment in communities of color.  Last summer, Holiday pledged the remainder of his 2020 NBA salary to create The Jrue and Lauren Holiday Social Justice Fund, which seeks to combat systemic racism and increase economic equality by providing funding and support to Black-led organizations and businesses.  Earlier this season, the fund announced support for 25 nonprofits and historically Black institutions, as well as 23 Black-owned small businesses in Los Angeles, New Orleans and Indianapolis.

In the fall of 2020, Jrue and his wife, Lauren, also partnered with the Wisconsin Women’s Business Initiative Corporation to identify small, women- and Black-owned businesses most in need of assistance.  After reviewing grant requests, the Holiday family announced funding for seven local businesses in January: Amri Counseling Services, Carter’s Quality Care, Hands at Home, Jamaican Season Island Restaurant, Kid’s Kingdom, Legacy Home Health Services and The SW.  Beyond financial support, the Holidays provide coaching for the JLH Fund grantees to expand funding opportunities and community engagement and work with Microsoft’s Nonprofit Tech Acceleration for Black & African American Communities so that all recipients can also receive technology and support services.  In Spring 2021, the Holidays opened the second round of applications and surprised a young man battling sickle cell anemia with tickets to a Bucks game in efforts to support the young man and bring awareness to the disorder that disproportionately impacts Black Americans.  Holiday has selected EXPO of Wisconsin as the recipient of his donation.

Juan Toscano-Anderson, whose parents are Black and Mexican American, is focused on empowerment for Latino and Black communities and established the Journey to Achieve (JTA) Foundation to give back to youth and families of color in the Bay Area, Santa Cruz and Mexico.  The Oakland native has continued to use his voice to advocate for social justice and equality in the Bay Area.  Toscano-Anderson participated in the Warriors’ VOTERS Win campaign – a PSA to encourage Black and Latino citizens to vote in the 2020 election and fill out the census – and led two Walk in Unity events in Oakland, bringing people together to combat oppression, police brutality and social injustice.

To create opportunity and empower young people of color this past year, he has discussed biases with 6th grade students in San Francisco, spoken to more than 3,000 African youth about his journey and overcoming obstacles and supported Digital Nest, a local nonprofit focused on empowering Latinx professionals, in a live Q&A where he discussed his childhood, basketball career and the pride he felt in playing with the Mexican National Team.  In continued efforts to support the Latinx community, he addressed more than 2,000 people in Spanish at the Día De Los Muertos Film Festival in Watsonville and purchased equipment and materials for Fundacion Unidos Por Chavinda in his family’s hometown that provides medicine and food for senior citizens and supports development and life skills for youth.  Toscano-Anderson has selected Homies Empowerment as the recipient of his donation.