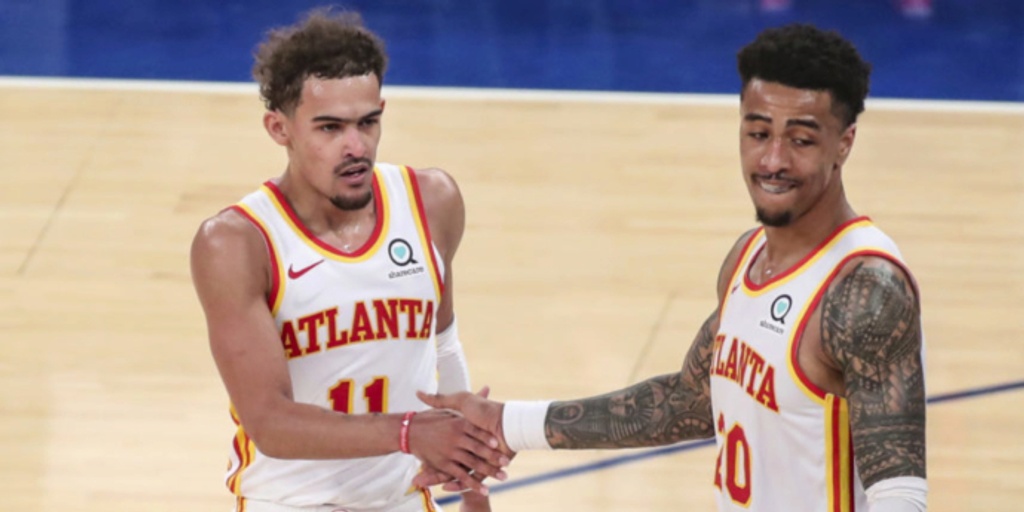 John Collins already has seen what playoff success has done to raise the hometown excitement for the Atlanta Hawks.

Collins is eager for the opportunity to build more enthusiasm now that the Eastern Conference semifinal series against the top-seeded Philadelphia 76ers has shifted to Atlanta.

With the series tied 1-1, Game 3 will be played on Friday.

There is less heading into Friday's Game 3 matchup between Phoenix and Denver. The Suns hold a 2-0 lead over the Nuggets in their Western Conference semifinal in a series that Phoenix seems to be in total control.

In Atlanta, the Hawks announced a sellout on Thursday for Game 3 and said only a few seats remain for Monday's Game 4.

The Hawks have won 13 consecutive home games, the longest active streak in the NBA. The streak includes two home wins as Atlanta beat the New York Knicks in five games in the first round.

“I go into the same gas station I would go into every single time and the dude working the desk wouldn’t know me until we beat New York and now I come in there and his face is lit up, you know what I mean?” Collins said Thursday.

“To me it was a small example of how deep we’re touching the city. ... I’d like to see more of that.”

Collins, the power forward in his fourth season, and third-year point guard Trae Young are in the playoffs for the first time.

“I can’t speak for Trae but just watching him I can tell he just loves being in these type of moments," Collins said. "He loves the big stage and thrives in it.”

— NEED TO KNOW: Young had 35 points with 10 assists in Atlanta’s Game 1 win but made only one of seven 3-pointers while scoring 21 points in the 76ers’ 118-102 Game 2 win on Tuesday. The 76ers used 6-foot-11 Ben Simmons as the lead defender against Young. Simmons blocked one of Young's shots and likely will be part of the Game 3 defensive plan. Meanwhile, the Hawks will continue to seek ways to provide help for overmatched center Clint Capela against Embiid.

— KEEP AN EYE ON: Philadelphia center Joel Embiid has a combined 79 points in the first two games against Atlanta. He has answered questions that a cartilage tear in his right knee would limit his production.

76ers coach Doc Rivers said Embiid is Philadelphia’s “trump card” and “a guy you can always go to.”

“The better your other guys are playing, the easier it is for your trump card to be dominant,” Rivers said Thursday.

— INJURY WATCH: The Hawks announced Wednesday De’Andre Hunter will miss the remainder of the postseason due to right knee surgery scheduled for Tuesday. Hunter, the team’s top perimeter defender, was held out the first two games due to soreness in the knee but he was effective against the Knicks.

“It’s a big loss for us,” coach Nate McMillan said Thursday. “He’s a big part of what we’ve done.”

The 76ers are still favored by 1 1/2 points, according to FanDuel Sportsbook.

— PRESSURE IS ON: Solomon Hill started but played only 8 minutes at Hunter's wing position in Game 2. Danilo Gallinari scored 21 points and Kevin Huerter added 20 off the bench.

Hunter could have been an important addition to Atlanta's rotation with his size when defending Tobias Harris. Though Gallinari and Huerter can play important roles, the defensive void left by Hunter's continued absence will be difficult to fill.

— NEED TO KNOW: The Nuggets will try to recover from an embarrassing Game 2 blowout loss when the series shifts to Denver. The Suns showed impressive balance by taking a 2-0 lead with their 123-98 win on Wednesday night. After eliminating the defending champion Los Angeles Lakers in the first round, Phoenix is in command and has left Denver, led by newly named MVP Nikola Jokic, in a must-win position in Game 3. Jokic had 24 points and 13 rebounds in Game 2.

— KEEP AN EYE ON: At 36, Suns guard Chris Paul seems ageless. He had 17 points, 15 assists and no turnovers in Game 2 and then said “I feel really good.” That's great news for Phoenix, especially following concerns about his sore right shoulder against the Lakers.

— INJURY WATCH: Denver swing forward Will Barton scored 10 points off the bench after missing 20 games with a hamstring injury. He played 16 minutes and may have his playing time restricted in Game 3.

— PRESSURE IS ON: Nuggets forward Michael Porter Jr. After he hurt his back in the first half of Game 1, Porter’s shot was off in Game 2 as he made only 3 of 13 shots and scored 11 points. Porter is Denver's second shooting option after Jokic, leaving him in the spotlight to take more of the scoring burden off the MVP in Game 3.

With starting point guard Jamal Murray out for the season with a knee injury, there may be too much pressure on Porter, especially if he's less than full strength.