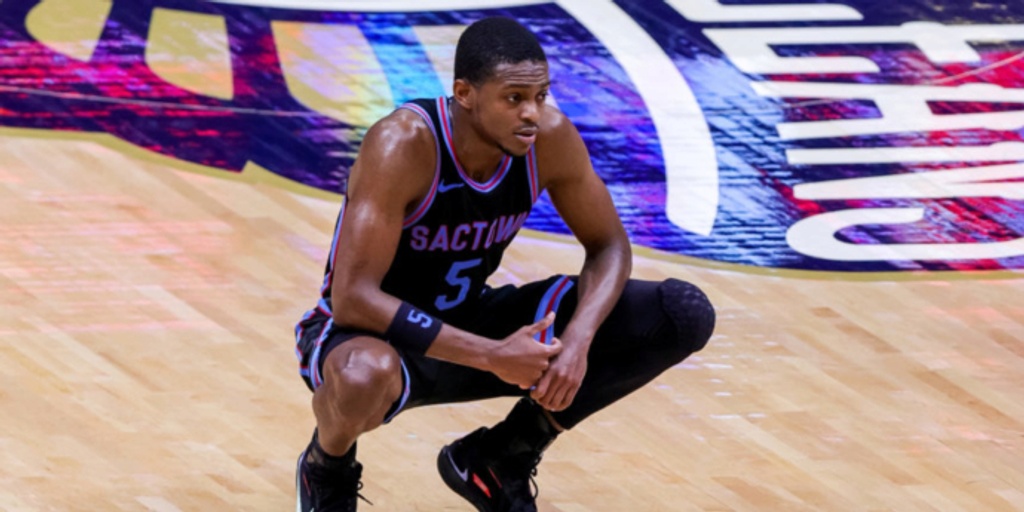 Can De'Aaron Fox save the Kings' postseason play-in hopes?

This season, it's been hard to put a finger on the Sacramento Kings. They’re currently tied with the Oklahoma City Thunder for the longest-active losing streak in the NBA, having dropped their last nine-straight contests. Before that, they had a five-game winning streak. To be quite frank: this team has been consistently inconsistent from top to bottom... except for De’Aaron Fox.

Yes, the one everybody calls “Swipa” is tearing this league up, even if the Ws aren’t coming along with his dominance. Fox is the only player in the Association averaging at least 29 points and 6 assists post-All-Star break. Among guards, he’s eighth in usage rate (31.8%), fifth in steals per game (1.9) and third to Anthony Edwards and Russell Westbrook in total possessions (1,564) during that span.

Saying the Kings have been reliant on Fox since the break would be an understatement, but this has been the story all season. His offensive output has been necessary for them to stay afloat because the team’s defense has been downright awful, as evidenced by the eye test and every metric out there (traditional and advanced).

Sacramento was showing signs of improvement and the team stopped “playing soft” in mid-January, when Luke Walton and Co. ripped off seven wins in eight games. As it would turn out, the first nine-game losing streak of the season would follow. This squad couldn't be more Jekyll and Hyde.

That’s what makes Fox’s accomplishments this season so special, even with a month of the season left. He’s eight assists away from joining seven others in the NBA’s 400-dime club. He’s had multiple steals in 23 games. He trails just Damian Lillard and Zach LaVine for the third-most total points in the clutch, and he has an even higher usage rate of 38.4% in those situations. And though it may not exactly jump off the page -- especially if you don’t make the majority of the tries -- he is near the top of the league with 1,052 field goal attempts.

What these numbers should tell you is that Fox is doing everything in his power to help propel these Kings to wins. Yes, Harrison Barnes, Richaun Holmes and rookie Tyrese Haliburton have helped his cause. Fox has his own faults, too; it has not been his season to shoot the basketball, but he’s willing to hoist ‘em up when they’re there. It’s still been a career-year, and an All-Star-caliber season that has surprisingly fallen under our noses -- especially when we’re so loudly enthralled by his 2017 draftmates Jayson Tatum and Donovan Mitchell.

"Just from the hours that he puts in and watching him this summer, [we knew] that something different was about to happen -- we saw how locked in he was," Holmes said of Fox. "It's honestly been amazing to watch... He's so vocal on and off the floor, and just his mindset is to attack.

"He understands that we go as he goes, and when he comes out attacking and getting into the paint and causing havoc, it's really, really tough for other teams to guard us. Just understanding the way he can impact the game and seeing him go out there and do it on a nightly basis, and seeing him bring that superstar-level competition to our team, it's been special to watch."

Sacramento is in a critical position regarding the 2020-21 campaign. Trailing the San Antonio Spurs by five games, the play-in tournament could start slipping away from this group’s clutches. Among their remaining 16 games, they’ll face the Dallas Mavericks three times and the Memphis Grizzlies twice, as well as meetings with the Golden State Warriors and Spurs with critical postseason implications. As far as contests considered must wins, they’ve got the Minnesota Timberwolves on back-to-back nights at home, as well as the plummeting, banged-up Oklahoma City Thunder in a trifecta of matchups.

With that kind of competition, there’s still a chance for the Kings to dig out of this hole. It’s not over until the final buzzer sounds on May 16, and you can bet that Fox will do everything he can to lift his team.