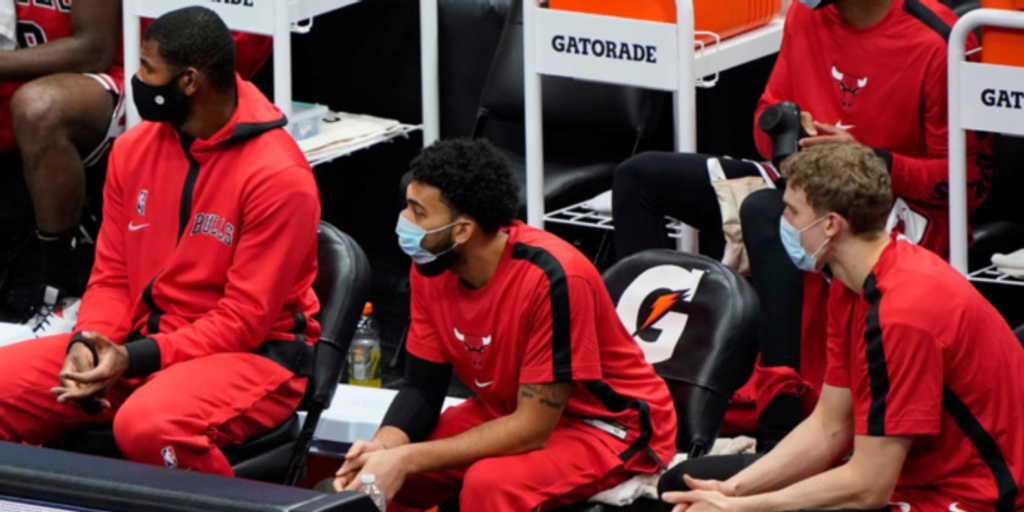 The news cycle in the NBA was churning particularly hard Tuesday, with new rules designed to stop the spread of COVID, developing news regarding the whereabouts of Kyrie Irving, and a new statement from James Harden that puts the possibility of him being traded back on the frontburner of the NBA universe.

But like just about everything in the regular news cycle as 2021 slogs along, the news provided more questions than answers -- such as:

Will confining players to their hotel rooms without guests, making them wear masks on the sidelines and limiting their time together really reduce their exposure to coronavirus, of which 4,500 people lost their lives Tuesday as the pandemic raged on? Or are the new regulations simply a band-aid that will do more to keep people further apart as we relentlessly try to move forward?

Hotel rooms are now closed off to non-team guests on the road. Movement of players and staff is limited on the road, with both now prohibited from leaving the hotel for non-team activities. Previously, players were allowed two guests in their rooms, including family and friends. This is an isolation game that the players did not sign up for.

"I'm a grown man. I'm gonna do what I want to do. If I want to go see my family, I'm going to go see my family," said George Hill, a guard for the Oklahoma City Thunder and longtime NBA veteran. "They can't tell me I have to stay in a room 24/7. If it's that serious, then maybe we shouldn't be playing. But it's life; no one's going to be able to just cancel their whole life for this game."

The Washington Wizards have already postponed their game tonight against Utah as infections, contact tracing and injuries have left them unable to field a team of eight players.

That puts them alongside the Boston Celtics, Miami Heat, Philadelphia 76ers, Dallas Mavericks and Chicago Bulls as teams dealing with significant COVID-related issues.

NBA players have now had their freedoms outside of the workplace significantly reduced. Will they be able to live with the changes without the Association having to call a massive timeout? Again, that is one of the reasons why today brings more questions than answers.

Next: What could Kyrie Irving possibly be thinking?

Ah, yes. That question is vexing the Brooklyn Nets today much as it did in the past when he was with the Boston Celtics and Cleveland Cavaliers. Is this a mental health break? If so, when does it end? The Nets are clearly frustrated as they head into Madison Square Garden tonight, knowing that Irving is out for another few days. Irving can answer everyone’s questions by speaking publicly, but he instead chooses to stay mum and have his exploits chronicled and speculated upon via social media. The optics don't seem great.

The Nets, by the way, kept DeAndre Jordan on the bench the entire game against Denver last night (with a DNP-CD). Could that mean they are getting ready to trade him, perhaps as part of a package for Harden? Jordan makes $41.5 million and any potential trade partner would have to match that salary. In Brooklyn’s case, Jordan and Caris Lavert only get them to $26.6 million, whereas Jordan and Irving puts them at $43.8 million. If the Rockets sent back a player such as Chris Clemons to match the salaries, this would work ... and presumably would make everyone except Kyrie happy.

Could it happen? Look, folks. If 2020 taught us anything, it is that anything can happen.

And should the Rockets hang onto Harden for another two days, we can all have a look at him on TNT, which has picked up the Rockets’ game against the Spurs and dropped Heat-Sixers as folks in Philadelphia (led by Joel Embiid) wonder why the 76ers are being treated a little differently than everyone else by the league office.

Embiid said the following after going for 45 points and 16 rebounds against shorthanded Miami in a 138-135 thriller.

"It just seems like every other game keeps getting canceled. But us, I guess the league just keeps making us play," Embiid said. "There's really no other explanation behind it, especially that Denver game, when we had to dress an injured player just to make sure we had enough players to be able to compete -- while other teams that haven't had that many players and the league hasn't made any of them dress an injured player, just to make sure there's a game going on.”

Is the big fella onto something? Nobody can say for sure. All around the NBA and the world, the same can be said for everyone.

So here is a question we all can appreciate: When, exactly, does 2021 get better than 2020? We are all waiting, with different degrees of patience and impatience, for that moment to arrive. It’ll allow us to look back on this January as a time capsule that we all survived one way or another, the NBA keeping us all sane to a certain degree every night after we navigate insanity in our daytimes. Keep going, y’all.