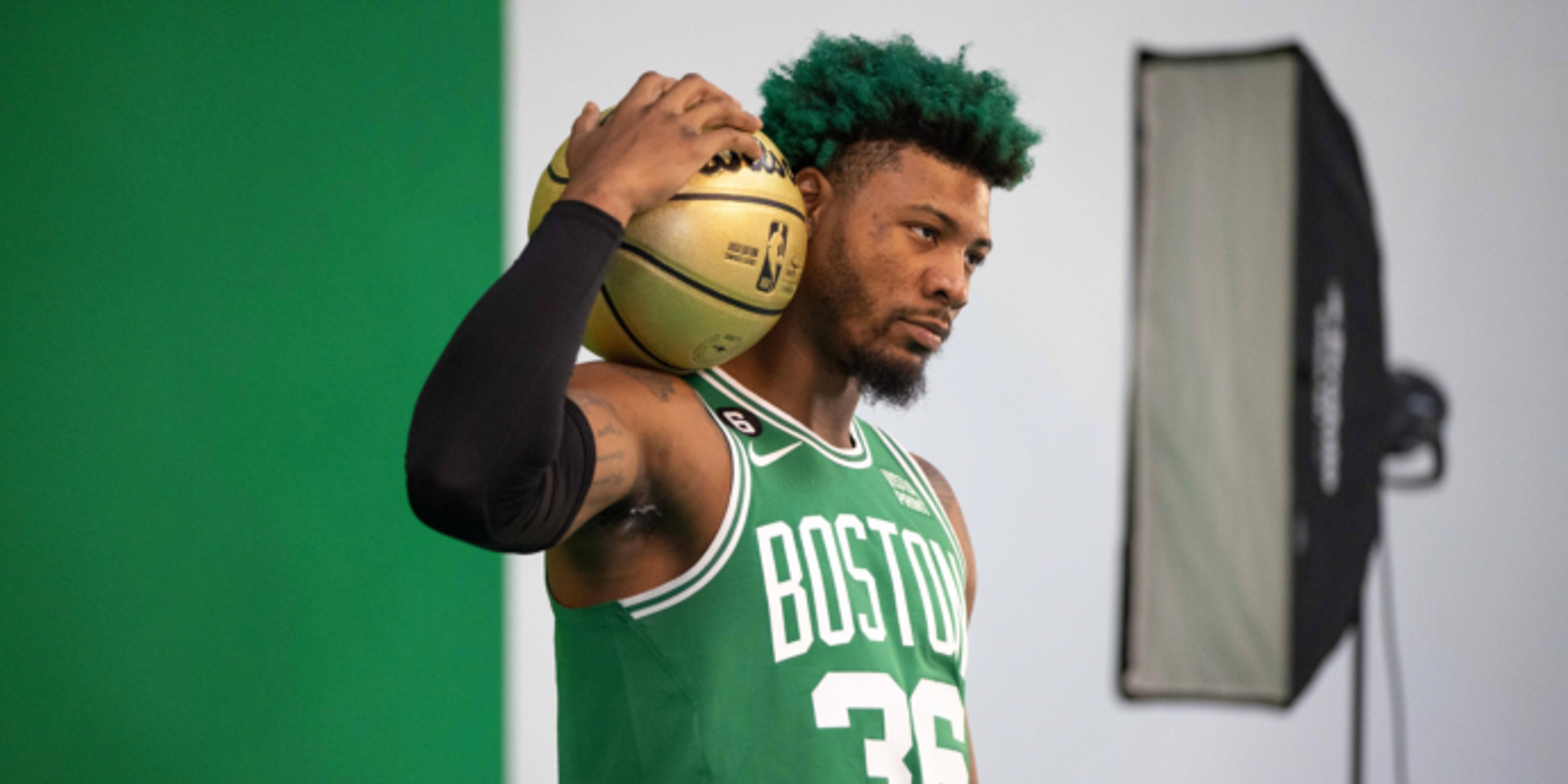 At this time last year, Marcus Smart's impending debut as full-time starting point guard for the Boston Celtics was one of the top storylines for a team entering a transitional season.

Now, it's hardly a storyline at all.

Smart emphatically answered the bell last year, helping steer the Celtics to an NBA Finals appearance. He obviously shined on defense, becoming the first guard to win Defensive Player of the Year since Gary Payton way back in 1996. But he also silenced most of the critics on offense with a steady, impactful season as Boston's floor general.

According to Cleaning the Glass, Smart logged 51% of his minutes at point guard, nearly doubling any other previous season in his career. Boston outscored teams by 13.7 points per 100 possessions in those minutes, putting Smart in the 99th percentile at his position. Positional estimates are always murky, but both CTG and Basketball-Reference claim Smart effectively doubled his time at the 1 with a tremendous payoff. He averaged a career-high in touches per game (65.2) and saw it spike in the playoffs (78.0), per Second Spectrum.

As the season progressed and the Celtics started winning, the chatter turned from Smart's trade value to his on-court value within his team's system. Jackson Frank highlighted for Basketball News how Smart fueled Boston's second-half turnaround with his playmaking and his pairing with Jayson Tatum. When Malcolm Brogdon joined the franchise this summer, he quickly said that he would happily come off the bench — meaning Smart stays entrenched at the point.

Smart enters his ninth NBA season at 28 years old. He's likely reached his athletic peak, but at the same time, he has just one full season of experience in his role despite being the longest-tenured Celtic. Is there room for him to keep growing at this point, and if so, what does that look like?

I wondered similarly entering the 2021-22 season. Perhaps my biggest question mark for Smart was how he could effectively pressure the basket as a scorer to complement his innate talent as a drive-and-kick passer. Smart had never been a particularly efficient finisher before last season, and he wasn't exactly a slasher.

In 2021-22, that changed — sort of. Smart took 23% of his shots at the rim, per Cleaning the Glass, which was about league average for his listed position as a "combo guard" and a slight uptick from recent seasons. He made 63% of those shots in the regular season, though, which was a 14% increase from 2020-21 and the second-best rate of his entire career.

Then, the playoffs happened. Smart still got to the rim at a similar rate, but his efficiency plummeted all the way down to 51%. Boston in general got stonewalled at the rim, as the team ran into tougher defenses in each progressive postseason series.

The positive side of Smart's attacks was that, from my eye test, he relied less on brute strength and more on craft last regular season. That's something I noted and hoped he would improve upon. He mixed in some unique finishes and showed off a bit more pace-changing chops than I anticipated:

But then, as driving lanes started to clog up in the postseason, he started to sink a little more towards the straight-line drives and bully-ball shots. The Warriors, in particular, had some awesome help defense that thwarted some of the advantages Smart created. Fatigue from a long, physical playoff run probably didn't help.

Overall, though, Smart showed he could make strides as a crafty inside scorer. He also created more of these shots himself in his new role at the 1. And with continued development, he should get even better:

Marcus Smart dramatically asserted himself as a driver last year. He self-created his highest frequency of at-rim shots ever and you can see there was a clear, concerted effort to get to the rim vs. prior seasons.

This plus the next chart are both very positive developments pic.twitter.com/VxA5F904W1

Smart's increase in self-created shots at the rim aligned with a decrease in self-created threes (shown in the Twitter thread), which is a fantastic redistribution of shots. But there's something else that's quietly interesting: He also took more "short mid-range" looks than ever before. According to Cleaning the Glass, 26% of Smart's field goal attempts came between 4-to-14 feet from the basket — by far a career-high — and he made those at a solid 45% clip.

Some of these shots are short mid-range jumpers, but many are floaters. InStat Scouting says Smart hit 45.6% of his floater shots last season. Smart embraces contact, but he also knows how to use a bump to create space, and as shown in the last clip below, he can even mix in some off-hand shots:

Using the short-mid-range area gives Smart some extra space to add onto however he pressures the rim. It also challenges the defense with another pressure point, which further opens up the outlet pass. The payoff looks like this, from Boston's first preseason game on Sunday:

Fun little play that you think is just going to be a Smart-Al two-man thing, but Smart creates this window with a ball fake and lasers one to Derrick White, then extra pass, Brogdon for 3 pic.twitter.com/iuHYtG80hk

Smart works off a side pick-and-roll with Al Horford, and Charlotte Hornets center Nick Richards plays a little bit further up in his drop coverage, making Smart's effort to drive to the rim or shoot a floater more difficult. That means Horford has a lane to roll to the basket, which is what PJ Washington is trying to negate by coming over from the weak side. But that leaves Charlotte vulnerable to a corner kick to Derrick White, which Smart opens up with a nifty ball-fake and pass. One more extra dish and Brogdon gets a three-pointer.

This type of pass comes about because Smart challenges defenses with his driving and scoring. He's already one of the better passers in the entire league. (I won't bog this story down by re-hashing that point, but if you have an issue, I can show why it's true.) Threatening as a driving scorer will only create more windows for Smart to maximize so his teammates can reap the rewards.

The last wrinkle in a potential next step from Smart would be how he is used without the ball.

According to our own Nekias Duncan:

That last sentence piqued my interest.

Boston tried Smart as a screener a decent amount last season and went to it a few times in the Finals. The Golden State Warriors often switched on the screens, so this play helped get Tatum a perceived mismatch against Stephen Curry (for the record, though, Curry did a great job of defending in this series). If the screen went how Boston wanted, Tatum could go to work. Or, Smart could slip the screen or roll, and Boston could find him open in the middle of the half-court. Then, he could drive or pass, where, as explained, he can truly be a threat.

New head coach Joe Mazzulla tried this a couple of times in the first preseason game, but didn't get much traction. This is something I'm definitely going to watch for against the Toronto Raptors, who are a tough, switchable defense, as well as in games where Boston could generate a mismatch for Tatum.

Marcus Smart's offensive game is versatile enough to where he can set Boston's stars up for success while also putting together some highlights in his own right. Now, it's about sharpening enough blades that defenses don't know how he'll hurt them on any given possession.