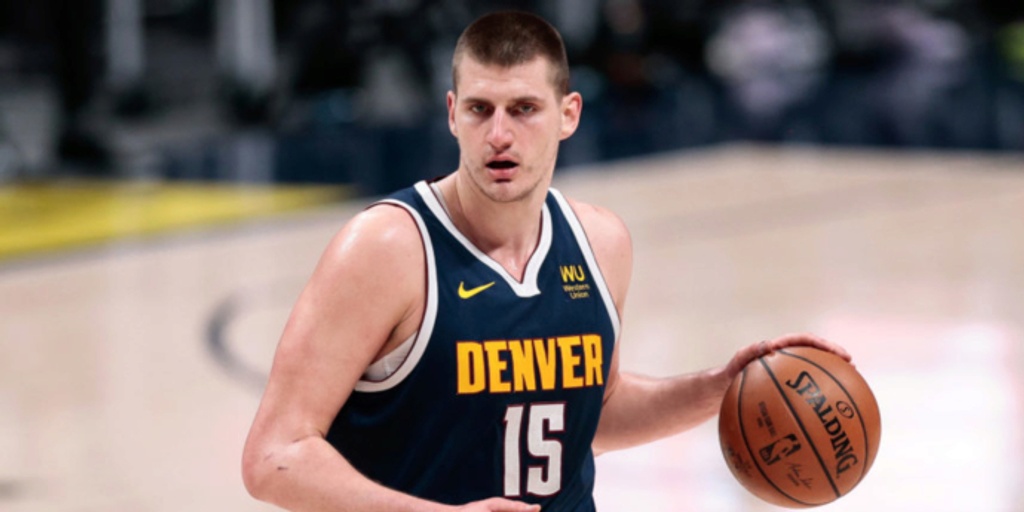 NBA awards: Nikola Jokic for MVP, Tom Thibodeau for Coach of the Year

Good to hear from James Harden last night, who returned as brash as he left.

“Not to brag or anything, but I’m like really, really good at this game,” Harden said after returning from an 18-game absence for the Brooklyn Nets, who may end up being the best team in New York... or may not.

If we have all learned anything in the past 14 months, it is to expect the unexpected. Today’s rules are not necessarily tomorrow’s rules, although one rule is the same from year to year when it comes to choosing the winners of the NBA’s annual awards: Vote with your conscience.

When the NBA sends out ballots to official voters, it entrusts them with making informed decisions and giving credit to the most deserving. There is nothing in the instructions about “embracing the narrative” or rewarding the unsuccessful, yet some voters do exactly that when casting their ballots. Eventually, they have to answer to the public if they cast an outlier ballot.

There will be no such blowback here because these decisions were made with the utmost care and concern. When you are a basketball journalist lifer, you try to stick with what has worked in the past – even in a season in which there was no in-person access to players, coaches, scouts and various team officials who can usually be used as a sounding board when deciding who to vote for on these awards.

The ballot below is organized in the same manner as an official ballot: Five choices for MVP, ranked first through fifth, and three choices for all of the other awards except All-NBA. So let’s have at it.

Unlike every other superstar on a winning team, he has been there from the get-go and has killed it statistically, sitting just outside the top 10 in points (26.5), and in the top 10 in both rebounds (10.8) and assists (8.4) for the team that has the best winning percentage leaguewide since March.

Julius Randle, Knicks: Not a ton of people are going to rank him this high in the MVP race (other than Tommy Beer) but Randle has not only been an All-NBA First-Team talent, but he has also been dominant against the Eastern Conference teams that New York may see in the playoffs.

Joel Embiid, 76ers: His injury absence probably will cost him this award. Doc Rivers has him playing with a passion and a controlled aggressiveness that Brett Brown could never summon. Embiid is third in scoring (29.2) and 11th in rebounding with 10.7 boards per contest.

Chris Paul, Suns: A pair of recent losses will prevent them from winning the West, and although Devin Booker might be the most consistent player for Phoenix, Paul gets the credit on the ballot for changing the culture.

James Harden, Nets: Harden is a victim of a prolonged injury absence as well. That will keep him out of the running for this award, but he merits a spot on this ballot because of how well he has run the Nets when he has played. He was almost a lock for this award before getting hurt.

ROOKIE OF THE YEAR Edwards' finishing kick has been something, and this ballot was going to include Ball at the top until the Hornets decided to play the final month of the season like it was the first month. Edwards’ 19.0 points per game ranks first among his draft class, along with ranking seventh in rebounds (4.7) and eighth in assists (2.8), clinches it.

LaMelo Ball, Hornets: LaMelo is going to be a heck of a player down the road, but he needs to put in more work over the summer on his strength and his defense. Going 1-for-10 and 1-for-9 in two of his past four games -- including going 2-for-17 from three, in addition to turning the ball over frequently -- while returning from a wrist injury did not help his case.

Desmond Bane, Grizzlies: Among those who play more than 20 minutes per game, Bane leads rookies in three-point shooting at 44% for a playoff team, which gets him the third-place nod over Saddiq Bey of Detroit.

Before getting into this award, a disclaimer: I believe Julius Randle will win this award, but to me he is not quote-unquote “improved” because he was already a terrific player for the Los Angeles Lakers and New Orleans Pelicans, and he shot 52.4% two years ago. I will be in the minority there, but I am okay with that.

LaVine is averaging career-highs in points (27.5), rebounds (5.0), assists (4.9) and in all three shooting percentage categories. 50.4% overall ain’t too shabby, but the above-41% perimeter clip with over eight attempts per game (back-to-back years of this volume, by the way) is what stands out.

Michael Porter Jr., Nuggets: This fellow was red-flagged by his injury history and a bad back two seasons ago when the Nuggets took a chance on him in the draft. Denver waited a whole year before implementing him into this team's rotation; it was worth the wait. Porter is averaging 19.4 points per game in his second season and shooting just under 55% from the field, including 45% from long distance.

Enes Kanter, Trail Blazers: In my honest opinion, Kanter is the most underappreciated player in the league. Good things happened whenever he entered playoff games for the Celtics last year, and they let him go. Half of the league’s general managers dismiss him as a bad defender, but he had 33 double-doubles. This season, Kanter is averaging 11.2 points and 11.0 rebounds on a career-high 60% shooting, and he filled in for an ailing Jusuf Nurkic as a starter for 35 games. He's been one of four NBA ironmen to have played every game to this point in the season.

SIXTH MAN OF THE YEAR 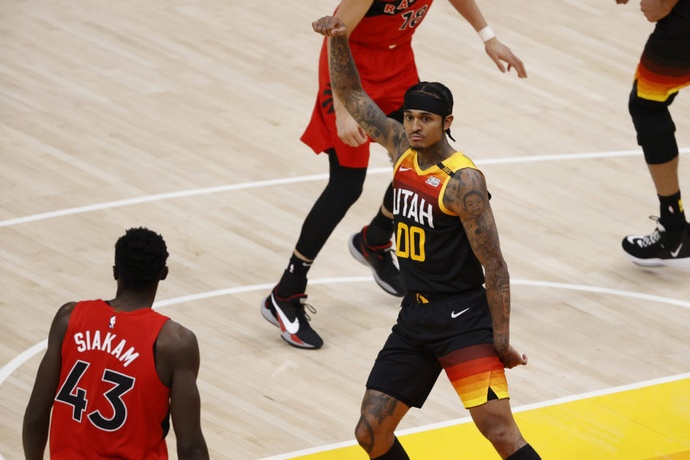 Clarkson may get this award unanimously after averaging 18.2 points per game in just under 27 minutes for a Jazz team that appears poised to finish first in the West.

Joe Ingles, Jazz: He made 28 starts because of injuries, most recently the one to Mike Conley, but has a vastly superior assist-to-turnover ratio than Clarkson and is sixth in the league in three-point percentage at a 45.6% clip as a volume long-range shooter (min. 30 games).

Derrick Rose, Knicks: Rose has made only three starts for the ‘Bockers, but he has been their unquestioned floor leader over the second half of the season. It was a great pickup early in the trade market; he will be a difference-maker in the postseason.

DEFENSIVE PLAYER OF THE YEAR

Gobert probably deserves more MVP consideration than he is going to receive, but the Utah big man still is deserving of this award for his 2.7 blocks per game and being second in the NBA in rebounding with 13.4 boards a night -- and he is the only player in the league averaging at least 10 defensive rebounds.

Jimmy Butler, Heat: The league leader in steals, Butler is from the Patrick Beverley-Robert Covington-Marcus Smart school of lockdown defenders. The league needs more of these guys.

Julius Randle, Knicks: Randle ranks second in the league behind Gobert in defensive win shares while playing for a coach, Tom Thibodeau, whose team locks down fairly consistently on the defensive end.

COACH OF THE YEAR 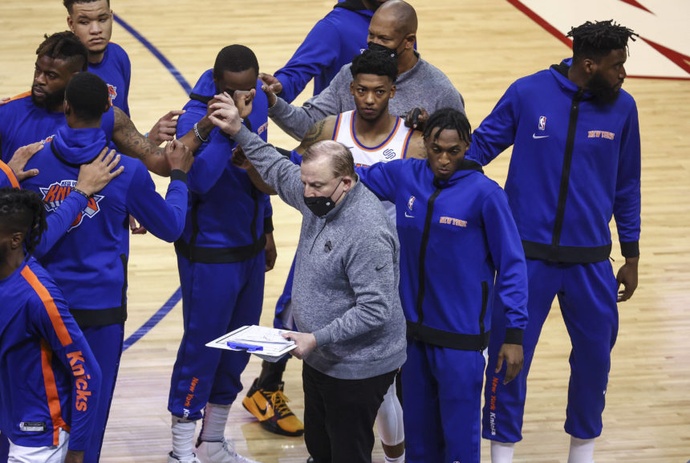 Only the folks who are married to basketball, as Thibs is, can appreciate his work ethic and his ability to connect with his players. The long postseason drought in Manhattan is about to end, and Thibs did it with Randle and Rose leading the charge.

Doc Rivers, Sixers: So it turns out there actually is someone on the planet who can motivate both Embiid and Ben Simmons. But Doc has a lot of playoff work to do to make up for last year.

Quin Snyder, Jazz: Not leaving Snyder off the ballot because Utah is still in the catbird seat in the East. Apologies to Monty Williams, but Jazz > Suns.