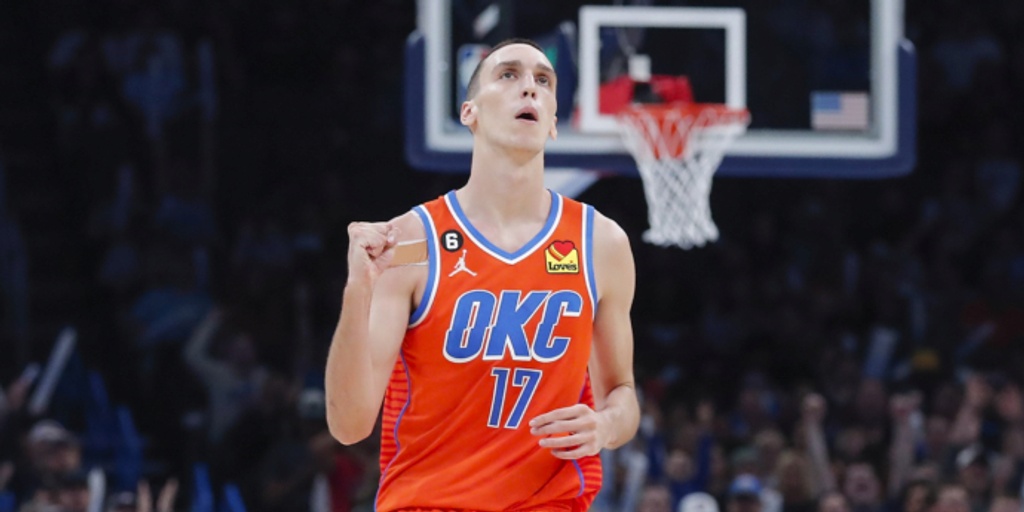 Aleksej Pokusevski is putting the pieces together with the Thunder

Oklahoma City Thunder head coach Mark Daigneault has been an eyewitness to the unique, confusing development of Aleksej Pokusevski. On Monday night against the Boston Celtics, Daigneault reveled in the symbolism of a breakthrough performance:

Mark Daigneault quote of the year:

"(Poku) had Horford tonight, which, it's a great contrast. We obviously had Horford when Poku was a rookie. If you told me that two years later Poku would be playing 37 minutes and guarding Horford ... I would've checked to do a sobriety test."

Pokusevski, still just 20 years old, has entered his third NBA season with an increasing chorus of impatient critics clamoring for consistent outings. He's long been viewed as the wacky-gadget prospect on a Thunder team nowhere near contention — the ultimate wild card on a roster that might as well throw wild cards out on the floor while it loses.

Something feels different this year. Pokusevski has started 8 of his 12 contests (he started 12 of 61 last season) and OKC is a respectable 6-8 with additional valiant losses to the Celtics and Milwaukee Bucks. He's averaging career highs in points (9.9), rebounds (5.9) and blocks per game (1.7). After ranking as arguably the league's most inefficient offensive player over the last two years, Pokusevski's 54.2% True Shooting clip is pretty solid — and a massive career-best.

It isn't just about the exciting new numbers. Pokusevski has been a notoriously rough, early-season player as he adjusted to a steep learning curve. This year, he's overextending himself less and playing with more confidence and more comfort. That showed up in Monday's 126-122 loss to Boston, where Pokusevski accumulated 16 points, 14 rebounds, 3 assists and 3 blocks.

The swats stand out as significant developments. Pokusevski's current 3.4% block rate is double his career-high and in the 87th percentile among bigs, per Cleaning the Glass (and he's barely even a big!). That second rejection on Jayson Tatum is an improbable one coming at the last possible moment before moving into goaltending territory. Few players in basketball could pull it off.

Oklahoma City has been using Pokusevski frequently as a drop coverage defender. It allows him to be less of a physical chaser and more intimidating with his length in space. Against Boston, he contains Jaylen Brown's drive and blocks his shot, and later shuts down a rolling Al Horford's first attempt. Pokusevski is improved at dealing with contact. I wouldn't call him "good" at it yet, and he needs to be better about some of his second efforts after an initial block — but he's exhibited demonstrable progress.

From the Nov. 11 contest against Toronto — look at some of these rotations and help blocks! Pokusevski can contain Fred VanVleet's drive, then adjust and recover all the way to the three-point line to block a Scottie Barnes three-point attempt. As long as the opponent isn't using a center as an offensive hub, OKC should feel confident that Pokusevski can hold down the fort as a lengthy, mobile nuisance in drop coverage.

Get this: According to PBP Stats, Pokusevski had 17 blocks at the rim in 61 games last season. He has 14 in 12 games so far this year.

On offense, he's starting to manifest some of the fantastical visions of a mobile, 7-foot shooter, and getting more active on the glass. Below are his 7 makes on 12 attempts from Monday:

The Celtics were content to leave Pokusevski open in actions where he snuck out to the perimeter, and he made them pay twice on four attempts. Poku is up to a solid 37.5% clip on catch-and-shoot treys; he finished at 31.0% last season. He also radiated composed creativity with the ball in his hands on some other makes, and even followed up that missed floater attempt with a sweet putback dunk.

Approximately 40% of Pokusevski's shots are coming at the rim — again a career-high — and only 44% of those attempts have been assisted by a teammate. He's working for his own shot while still fitting into OKC's offense. Per PBP Stats, Poku had 48 putback points all last season. He's got 18 now and would surpass 48 less than halfway through this year.

Stability is driving the overall optimism surrounding Pokusevski's start. Yes, his track record of radical peaks and valleys mean we can't say he's arrived after just 12 games. But Pokusevski doesn't look like he's being forced into the Thunder lineup as a play-test. He's legitimately a positive two-way contributor for a pretty solid basketball team.

How many 20-year-olds can say that?